A History of Zagreb in 10 Objects 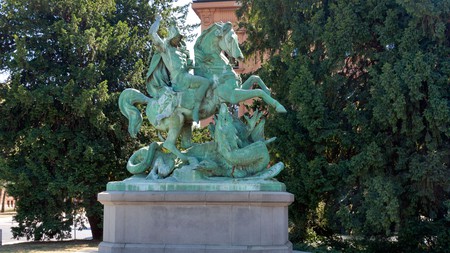 One of Zagreb's most prominent statues is of St. George killing a dragon, located near the National Theatre | © Panama / Alamy Stock Photo

Formed in 1850, the Zagreb we know today is a relatively young city. But its history dates back to the Middle Ages when Neanderthal man roamed the hills 30,000 years ago. The Croatian capital has since seen kings, emperors and armies sack the lands, split territories and subsequently put it all back together again, each time adding a new layer of unique history that can be seen across these ten incredible objects.

“One of the most poignant images any tourist will take from Zagreb is Dolac, the central food market with its bright red umbrellas,” says Adriana Belay, exhibition curator at Zagreb’s Museum of Arts and Crafts. The striped red umbrellas belong to the folk costume of the people of Šestine, one of Zagreb’s oldest neighbourhoods. Legend has it that the umbrellas were originally black, but the power of a young couple’s love – as they embraced beneath their parasol – transformed it into a vivid red. According to Adriana, Šestine umbrellas are a “popular souvenir, still produced using traditional techniques by local artisans”. Purchase your own from expert maker Tomislav Cerovečki at his shop on Ilica 49.

Originating from the Hrvatsko Zagorje and Zagreb regions, Štrukli is a staple on menus across the Croatian capital. Served boiled or baked, this cheese-stuffed pastry (meat-filled and sweet options are also popular) can be enjoyed as a starter, main or dessert. Since the 1950s, restaurants like Le Bistro have elevated this humble pastry, taking it from rural households to the tables of the dining elite. In 2007, Štrukli was awarded a place on Croatia’s intangible cultural heritage list. While the exact roots are unknown, Štrukli’s close relation to the traditional Slovenian dish Štruklji speaks to Croatia’s past as a territory often merged with Slovenia – from 1000BCE Illyria to 9CE Pannonia and the Kingdom of Serbs, Croats and Slovenes, formed in 1918.

Beneath the cobbled city streets lies an intricate network of underground passageways, the most famous of which is the Grič Tunnel. In the 90s, ravers colonised the abandoned tunnels for their incredible acoustics. In 2016, Grič was transformed into an experimental 350m-long artistic space and, according to Adriana, “has since become one of the main points for events, exhibitions and art installations in Zagreb”. Grič’s history wasn’t always so colourful and creative: its original function was to serve as a bomb shelter and transport link during World War II.

Made from sweet honey dough and edible decorations, Licitar hearts date back to the 16th century, when food crafts were becoming popularised across Europe. Licitar craftsmen were highly regarded in society and their trinkets became prized tokens of love and affection. Over the years they’ve come to symbolise Zagreb and were awarded a place on UNESCO’s list of intangible cultural heritage in 2010. Despite being as commonplace as a fridge magnet, you shouldn’t feel self conscious about taking one home. Made famous as a popular pilgrimage souvenir sold at the Marian Shrine just outside Zagreb, Licitar hearts are the souvenir’s souvenir.

Zagreb’s history is intrinsically linked to the two hilltop settlements of Gradec and Kaptol, which merged in 1850 to form the modern-day city. One of the best ways to visit these areas is via another piece of living history: Zagreb’s funicular, which “has been a symbol of the city from the moment it opened back in 1890,” according to Adriana. The miniscule track spans a mere 66m and it takes just 64 seconds to complete a one-way trip. In 1934, the original steam engines were replaced with more robust electric engines, but apart from this upgrade, little has changed since the funicular was inaugurated.

During the filming of Game of Thrones, Croatia’s cityscapes became the inspiration for many a magical kingdom. But myths and legends have pervaded here long before the cameras started rolling. In lieu of a noble quest, you’ve simply to walk around the city to find Zagreb’s iconic dragon statues that hark back to the city’s rule under Roman Emperor Diocletian (285-305CE). The statues honour famous dragon slayer Saint George, who was martyred under Diocletian for refusing to renounce Christianity. The two most prominent statues are located next to the National Theatre and underneath the Upper Town’s Stone Gate, where the mysterious Order of the Brethren of the Croatian Dragon keep residence.

As one of the oldest and most recognised buildings in Zagreb, St Mark’s Church is emblematic of the city’s historical and cultural movements. The Romanesque window on the south facade dates the building’s origins back to the 13th century, while the stunning Gothic portal speaks to late 14th-century fashions. Today, visitors to St Mark’s Church will also find works of more modern art from renowned painters Jozo Kljaković and Ljubo Babić as well as prominent sculptor Ivan Meštrović, a leading figure on Zagreb’s 20th-century art scene.

Zagreb’s Archaeological Museum houses myriad wonders, but the most famous by far is the Vučedol Dove. One of the finest examples of craftsmanship uncovered from the Gradec archaeological site, the Dove has become one of the most recognised symbols of prehistoric Croatia and Vučedol culture (an Indo-European culture that occupied Croatia from 3000-2200 BC) – and is even depicted on the back of the 20 kuna banknote. The hollow bird-shaped vessel (believed to be either a dove or a partridge) would have been a key religious symbol and cult object, possibly used to hold hallucinogenic liquids for spiritual rituals.

A necktie might seem like an odd souvenir, but you’d be remiss to leave the so-called ‘capital of cravat’ without exploring this unique heritage. When Croatian soldiers joined the Thirty Years War in Europe, they became known for their heroism, military prowess and distinct red neckties. Enamoured by their uniforms, the French coined the term ‘cravat’ as a twist on the phrase ‘à la croate’ and Zagreb’s most iconic accessory was born. See the scarlet scarves in action during the honorary Cravat Regiment’s changing of the guard, every Saturday and Sunday outside St Mark’s Church.

Museum of Arts and Crafts

The Museum of Arts and Crafts, built to celebrate and preserve traditional crafts and objects, is one of the biggest museums in Zagreb, hosting over 100,000 items across 22 collections. But “what makes the building significant, apart from its size,” says Adriana, “is its unique appearance designed by the most famous Zagreb architect, Herman Bollé. It is also the first building in Croatia constructed as a museum, setting new trends later applied in cultural institutions throughout the region.” Fortune seems to favour the museum which, despite being hit by devastating earthquakes in 1880 (mere months after opening) and again in 2020, “still stands for future generations displaying some of the finest pieces of Croatian heritage”.