A History of Dubrovnik’s City Walls 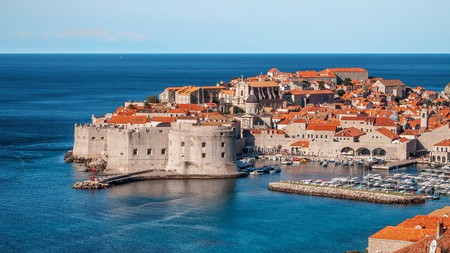 Above the summer bustle of Croatia’s busiest tourist destination in full flow, the City Walls of Dubrovnik provide much-needed privacy and instruction in medieval history at the same time. Stark white against the azure of the Adriatic and a cloudless sky, they are also as captivatingly beautiful as the day there were first broached, by Napoleon himself, in 1806.

Carved above the gate of Lovrijenac, the fortress integral to the City Walls that guard Dubrovnik, an inscription reads: ‘Non Bene Pro Toto Libertas Venditur Auro’, or ‘Liberty Should Not Be Sold At Any Price’. With this motto in mind, the former maritime republic of Ragusa fended off many a foe. 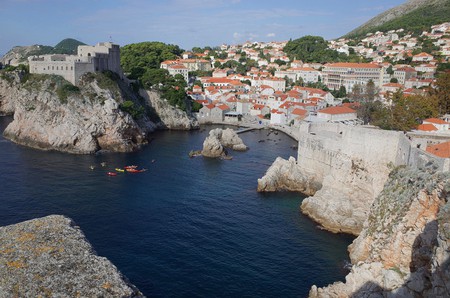 Ruled by elected Rectors, Ragusa – as Dubrovnik was known – erected no statues or palaces to kings, queens or princes but built two kilometres (1.25 miles) of fortifications over the course of 450 years and, within them, a prosperous working state. Medieval Ragusa had its own health service, pharmacy, hospital, orphanage and water supply. Slavery was abolished in 1418. The republic had its own rules on sanitation and town planning. Literature, trade and crafts flourished.

A symbol of Ragusa’s power and guile, the City Walls were created after Ragusa freed itself of Venetian rule in 1358, built approximately two metres (6.5 feet) thick towards the sea, and at least twice that width facing inland. Whenever threatened, Ragusa used diplomacy or money to maintain its independence from Venetians and Ottomans. The City Walls prevented any potential invasion, even surviving the terrible earthquake of 1667 that destroyed most of the medieval city. Its four forts and two stand-alone fortresses – the sea-facing Lovrijenac and harbourfront Revelin – stayed firm. Surviving Senate members gathering within Revelin to redraw post-earthquake Ragusa could thank their predecessors for their good fortune. 200 years before, hastened by the Ottoman conquest of Constantinople, the Ragusa Senate had hired Michelozzo of Medici Palace fame in Florence to strengthen and embellish the City Walls. Their cylindrical form is Michelozzo’s, as were the plans later used by Venetian architect Juraj Dalmatinac and local builder Paskoje Miličević to continue his work.

Ragusa eventually fell when Napoleon marched through the Pile Gate in 1806. The City Walls subsequently survived bombardment by British, Austrian and, in tragic modern times, Yugoslav forces. Today they play a cultural role as a backdrop to outdoor performances as part of the Dubrovnik Summer Festival, Croatia’s own Edinburgh Fringe. Lovrijenac provides the stage for the traditional annual re-enaction of Hamlet. Revelin is home to the city’s top nightspot, Culture Club. By day, they accommodate a steady stream of strollers on the City Walls tour, who enter by the Pile Gate and take their time marvelling at the medieval architecture and stunning views of the Adriatic and former Ragusan city below.