A Guide to Sailing Around Split, Croatia 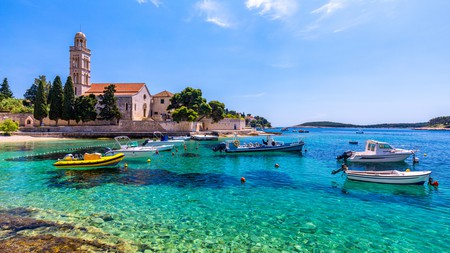 Split was practically built on sunshine. Its marble streets host pop-ups and Prosecco bars. Its Riva waterfront ranks among Europe’s greatest promenades for spotting your yacht while drinking Spritz. Its attractions range from fine dining to fine art, a thriving local food market and even a Game of Thrones museum. In short, the second city in Croatia is a leading yacht-charter destination that quite simply rocks. Better still, the highlights of the 100 islands surrounding Split – including Hvar, Brac, Vis and Korcula – are on every sailor’s bucket list.

Firstly, here’s the story behind Split. When Roman emperor Diocletian retired, he could choose to settle anywhere in the known world. Which location did he pick for his white-marble retirement palazzo? Split’s gorgeous bay, with its sun-drenched microclimate, of course.

Exploring offshore? The key yachtie island is smart Hvar. For 5,000 years, those in the know have been drinking wine made in its so-pretty-it’s-Unesco-protected island interior. Hvar’s coastline is stocked with beach bars, oyster shacks and anchor-here creeks, too. Although you’ll likely find another boat already moored when you arrive.

That’s why canny charter yachts sail across the habitually calm Adriatic to smaller, quieter Vis. The island was off-limits for most of the 20th century, during the Yugoslavia period, which preserved rare grapes, fresh seafood and secret sands such as Stiniva Cove. 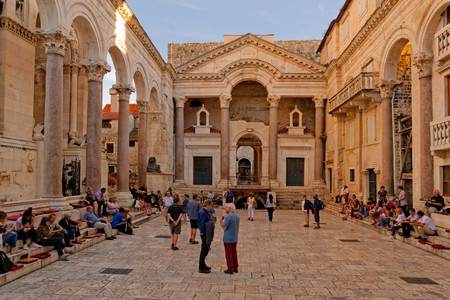 Split is the epicentre of Croatia’s burgeoning charter-yacht market. Find sailing cruisers, Turkish-built gullets, luxury liveaboards and superyachts for rent via specialists such as SamBoat in the city’s main marinas or in the mainland yachting towns of Trogir, Marina, Rogoznica, Primosten and Sibenik. The islands of Hvar and Brac – home to guidebook-fronting the Zlatni Rat shoreline – serve tourists more interested in motorised runarounds for beachy explorations. And who can blame them?

The impeccably sited ACI Marina Split (VHF 17) is one of the oldest, biggest and best marinas in the Adriatic. In one direction, it’s a 20-minute stroll along Split’s seafront boulevard to Diocletian’s Palace in the Unesco-listed city centre. In the other direction, you’ll find city beaches, parks, hiking trails and toes-in-the-sand restaurants along Split’s Marjan Peninsula.

ACI Marina’s 312 berths include space for its frequent superyacht visitors alongside Tesla charges and a customs office. Although, at around €100 per night to moor a 10m yacht, cheaper marinas are available. The cutest anchorage on Day 2? Ease your yacht into Stracinska Bay on the nearby (yet utterly wild) island of Solta. It’s like sailing back to the 19th century. 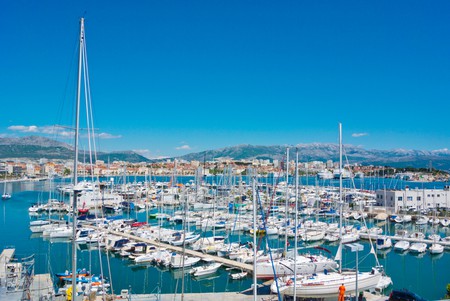 The ACI Marina store stocks cold beers, snacks and not much else. Better to walk 10 minutes to the seafront Konzum supermarket for a massive choice of fresh fruit, bottled water, pickles, pasta, booze and delicatessen treats. Pazar Green Market is also a must for fresh produce, sold on open-air stalls running along the eastern side of the Diocletian Palace in front of the Silver Gate.

Croatia’s biggest coastal city has been ruled by Romans, Byzantines, Venetians and Austrians, and borrows spices and ideas from far and wide. It’s even said that the Ancient Greeks who settled the area first didn’t have to farm; they simply collected crabs, gathered figs and foraged mushrooms in the forest.

Split’s land and sea cuisine is best tasted as pasticada, a marinated meat stew with dried fruit and Prosecco, and komiza pogaca, a savoury pie of caramelised onions, capers and salty fish. The digestif of choice in any seaside konoba (restaurant) is travarica, a fire-in-your-belly grape brandy, zinging with island herbs. Homemade limoncello will also dial up an evening. 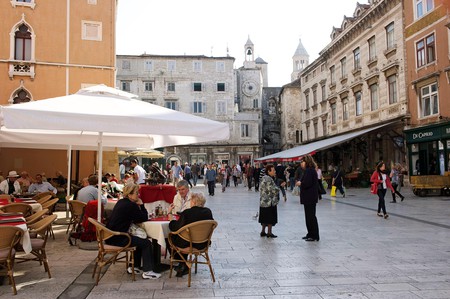 The Vis-Split Regatta is one of Croatia’s biggest sailboat races. Since 1934, competitors have tacked out of Split’s Labud Sailing Club, weaved past Hvar, then raced to a drinks reception on Vis. The three-day affair attracts over 150 cruisers who race in the name of good humour and even better food. 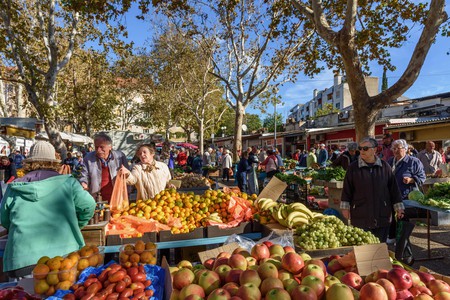 The reason why Romans chose Split to rest up and repair? The city’s sunny, sheltered harbour, with easy access to scores of anchor-friendly islands. Endless sunshine pushes temperatures to 25C in June and September, and 30C in July and August. Pleasant spells through May and October keep the sea near 20C. Rain remains mostly behind the hills beyond. All of which stretches Split’s sailing season longer than other Croatian destinations to the north. Tides aren’t worth worrying about. Be wary of the currents and winds that filter through island gaps.

Seafront Split Airport serves a multitude of destinations. By car, it’s 30 minutes to downtown Split, or even less to the yacht-charter ports of Trogir and Marina. The harbour towns of Rogoznica, Primosten and Sibenik are 45 minutes away. A new (yet not particularly regular) ferry service links Split Airport’s Resnik ferry port and beach directly with the islands of Brac and Hvar. Overnight ferries also run from Split to Ancona in Italy. 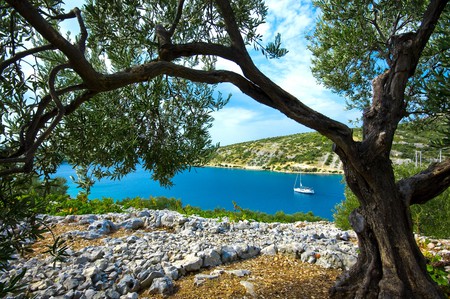