A Guide to Sailing Around Dubrovnik, Croatia 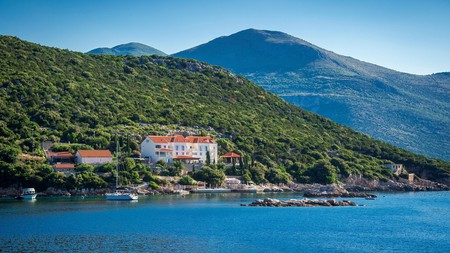 Voyages from Dubrovnik don’t start in a mere marina. You’ll be waved off from a Unesco-listed site like sailors a millennium hence, before tacking alongside city walls made famous in Game of Thrones. By lunchtime, you’ll be anchored off the 14 Elafiti Islands, only three of which are inhabited. The rest of these forested gems are the preserve of snorkellers, falcons and butterflies. The best way to see them is undoubtedly by boat. After all, chartering a yacht often costs far less than a fancy hotel.

Cruise around Croatia in style by chartering a yacht through SamBoat for the day, or book a week-long sailing vacation with Dream Yacht Charter.

Here’s the headline news: your yacht is moored in one of the world’s most spectacular cities. A destination so beautiful it has been featured in the likes of Succession and Star Wars. Hike the city walls. Swim from the city beaches of Bellevue and Danče. Ride the cable car for views of exactly where you’ll soon be sailing.

When you’re done with Dubrovnik, switch to a boat and a set off for Lopud – the most elegant of the three inhabited Elafiti Islands. Drop anchor to find fortresses, monasteries and art galleries, plus one of the Dubrovnik cruising area’s few sandy beaches, Šunj. Our tip? Anchor early or late to avoid day-tripping crowds. 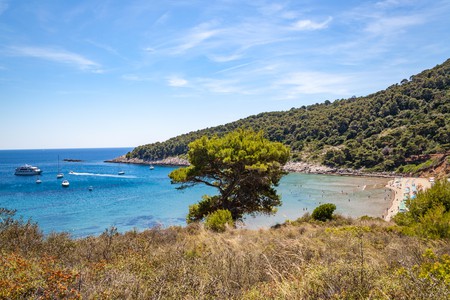 Sunj Beach is a popular sandy beach on Lopud Island, one of the Elafiti Islands | © kevin snelling / Alamy

Fewer boats make it as far as Mljet. This huge island, shared by a mere 1,000 residents, is riven by swim-inside caves and secret beaches. Half of Mljet resides within a National Park, which means you’ll share your charter-yacht mooring with soaring eagle owls and honey buzzards, as wild boar and turtles trot on land.

Marina Frapa (VHF 17) is splendidly sited in Dubrovnik’s historic port of Gruž. Its 220 berths overlook old stone houses and the ferries that depart for Lopud and Šipan in the Elafiti Islands.

Marina Frapa is classy all right. Yachties may charge a Tesla, launder their whites or drink DayGlo cocktails by the pool bar. Dubrovnik Old Town is a 40-minute walk (or 10-minute cab ride) away. Seeking solitude? Drop anchor off the long, skinny and completely uninhabited island of Jakljan. 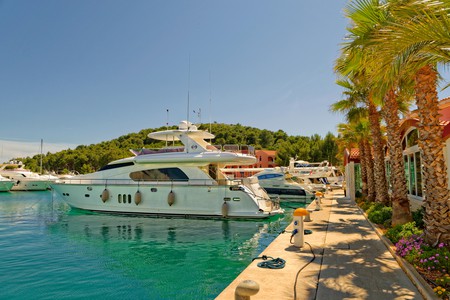 Many Croatian coastal cities enjoy the culinary influences of Venice and the Austro-Hungarian empire. Dubrovnik was an independent republic (imagine a medieval Monaco) for 450 years. The city’s sailors imported spices, seedlings and foodie ideas from across the world. Only-eaten-here dishes include šporki makaruli, a beefy pasta with enough calories to fill a hungry sailor, and rožata, a wobbly crème caramel that zings with lemon zest and cherry brandy.

On land, try Konoba Bonaca, which serves elegant seafood in age-old premises overlooking the Rijeka Dubrovačka inlet. The restaurant’s fish platter is a can’t-go-wrong medley of Adriatic seafood. At sea, moor at Konoba Kod Marka on the island of Šipan, where just-caught helpings of slipper lobster and scorpionfish are paired with island wine.

SamBoat is a specialist in the Dubrovnik area, with bareboat, guided and skippered boats. Scores of motor and sailing boats can be chartered from Dubrovnik’s two main harbours: historic Gruž near the city centre and 380-berth ACI Marina in the Rijeka Dubrovačka inlet. Sailing yachts in Dubrovnik are mostly large, new and well-maintained and include Dufours and Bavarias, for charter with or without a skipper. Motorboats are mostly open affairs; perfect for a salty tour around the Elafiti Islands.

Alternatively, opt for Dream Yacht Charter who specialise in multi-day bareboat and skippered charters around Dubrovnik. Speak to one of their helpful team members who will help you choose the best option for your trip – whether you’re an experienced seafarer or a newbie to sailing. 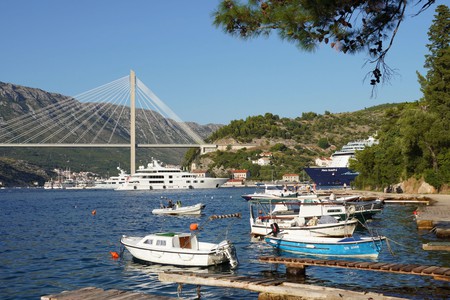 A view to the Franjo Tudman cable-stayed bridge | © Andia / Alamy

On the coastal stroll from Marina Frapa to central Dubrovnik, Pemo Market will supply a week’s worth of salad, eggs and ćevapi meatballs if interspersed with island restaurant dinners. For serious provisioning, shop at Maxi Konzum near the city beach of Bellevue. Push a trolley around its bakery, cheese section, deli counter and alcohol aisle, stocked with seldom-exported Croatian wines.

In early August, South Dalmatia Regatta competitors sail out from Orsan Yacht Club in Dubrovnik’s Gruž harbour. The itinerary is a greatest-hits guide to the Croatian Adriatic. Gaze out over historic Korčula, family-friendly Orebić and the national park-protected island of Mljet, before racing to Dubrovnik in a sea of sails. In October, the Offshore Challenge from Dubrovnik to the Dalmatian port of Biograd na Moru is a headlong sprint to the finish. 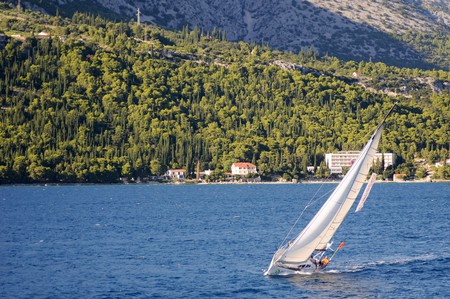 Yachting has long been popular off Korcula | © Mariano Garcia / Alamy

May to September is prime sailing time. Wind speeds average 5 knots, rising to 20 knots on the breeziest days, before generally dying back in the early evening. Dubrovnik basks in 300 sunny days per year, although in July and August it can get blisteringly hot and busy, so plan your sailing schedule accordingly. September is particularly beautiful as sea temperatures are still 23C – that’s 2C hotter than June.

Dubrovnik Airport is spectacularly located near a cliff edge, south of Dubrovnik Old Town via a switchback coastal road. Ferries operate from Gruž harbour to the Elafiti Islands as well as across to Bari in Italy. 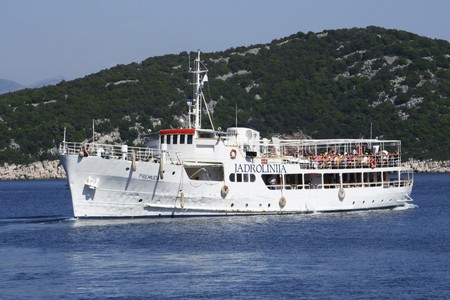