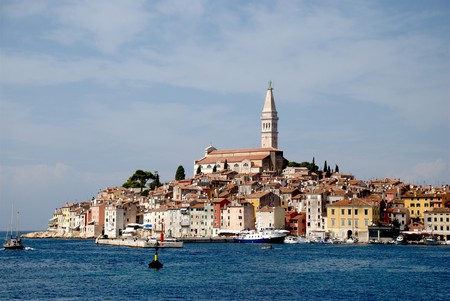 For a town of barely 15,000 inhabitants, picturesque, waterfront Rovinj offers plenty to the visitor looking for something more than just a beach – although that’s available too. A street of artists, a museum of Old Masters, a panoramic cocktail bar and historic cycling trails are just a few of the many attractions.

A secluded wooded headland south of town, a pleasant a 15-minute walk from Rovinj bus station, Zlatni Rt (‘Golden Cape’) sits on the other side from Lone Bay. Referring both to the area of pine forest, walking and cycling trails, and the string of beaches fringing it, Zlatni Rt is an easy outdoor getaway from the crowds of the Old Town. 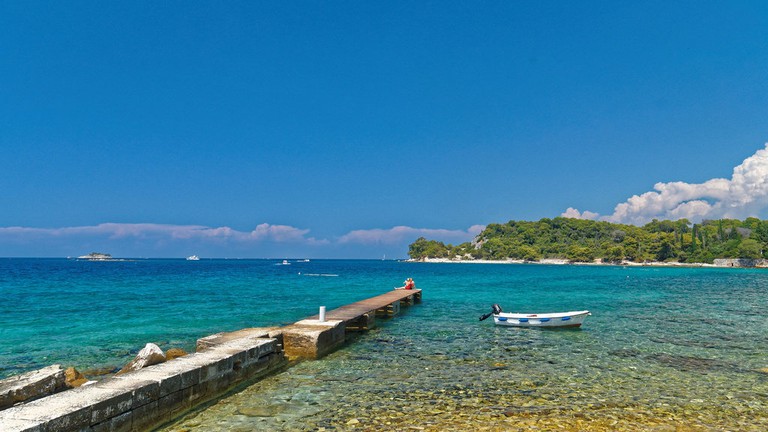 From the Marina, past the pier and round the headland, Rovinj becomes wonderfully photogenic, its waterfront lined with restaurants and cocktail bars best enjoyed as the sun sets. Book a table at the Copacabana, the Ancora, the Stella di Mare or La Puntalina and you’ll be gawping at the panorama rather than the plate of seafood you’ll be having to pay just that little bit extra for. Worth every lipa, of course, and unbeatable if you’re dining as a couple. 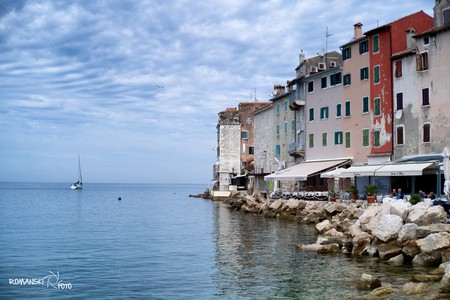 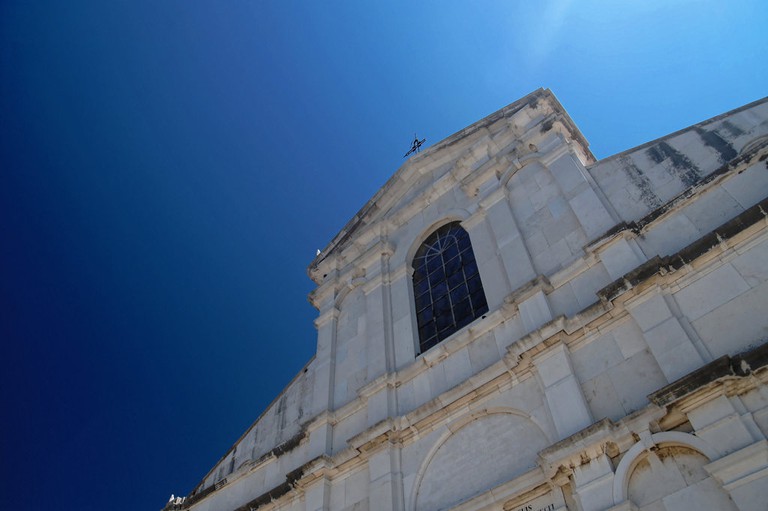 St Euphemia's Church | © Christoph Sammer/Flickr
Built in the 1730s to house the remains of St Euphemia, a Christian fed to the lions by Diocletian in 303AD, this Baroque church centrepieces the Old Town, its bell tower a major landmark. The relics are kept in a Roman sarcophagus, while the statuary and other works of art inside date from the 15th and 16th centuries.
Open In Google Maps
Trg Sv. Eufemije, Rovinj, Istarska županija, 52210, Croatia
+38552815615
Visit Website
Give us feedback

The underwater world of the Adriatic is the focus of this old-school institution, opened in 1891. Rovinj Aquarium provides a pleasant and affordable diversion, bringing you face to face with the octopuses and squid you might otherwise see on your dinner plate. Don’t expect schools of bright clownfish – this is the public arm of a maritime research centre, the Ruđer Bošković Institute – but be prepared to be impressed by the sheer diversity of what’s out there, just the other side of this waterfront attraction.

I spy with my little eye …. #rovinj #aquarium #octopus

Somewhat precariously set atop the rocks right over the waves, accessed by a walkway, Valentino makes use of its location by offering the best cocktails in town. Classic mixed drinks and top-quality champagne are served to your table, or you might just want to plot up on the rocks with one of the cushions provided. If you’ve had more than one, then hold on tight to the rope railing as you scale the steps back up. 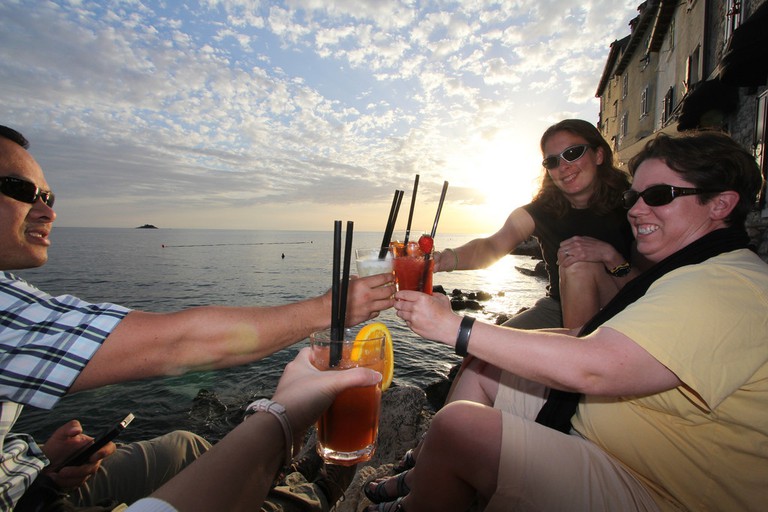 Wine bar, boutique and café, Piassa Grande allows you to sample Istria’s finest wines at a terrace table in the heart of the Old Town. Owner-enthusiast Helena Trošt stocks some 100-plus labels, some two dozen available by the glass, also offering local cheeses, olive oils and snacks of bruschette and truffle-flavoured biscuits.

We love finding ourselves a spot while away and calling it our haunt (let's not kid ourselves, it's always a bar), and we've frequented this old town joint enough during the four days in Rovinj. Loved sipping some San Servolo – craft beers produced locally in Istria – and Campari spritz, observing the comings and goings over the cobblestone lanes and weathered buildings. Let's not forget to slow down even if we're on holiday, people.

As well as stretches of the pedestrianised promenade, Rovinj offers a number of cycling trails that allow you to see the best of the surrounding countryside. One runs from the beach of Zlatni Rt, through a protected forest park and past an 11th-century church, another takes you to Figarola, offering the perfect view of the Old Town, and another takes in the Limski kanal and the medieval remains of Dvigrad. The handful of cycle hire places in town can provide more detailed information and, of course, bikes. 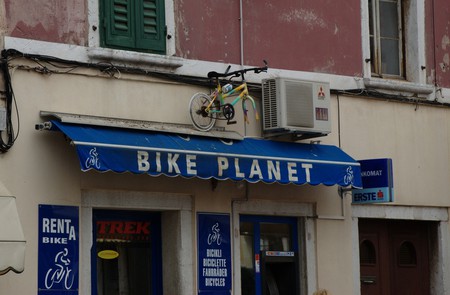 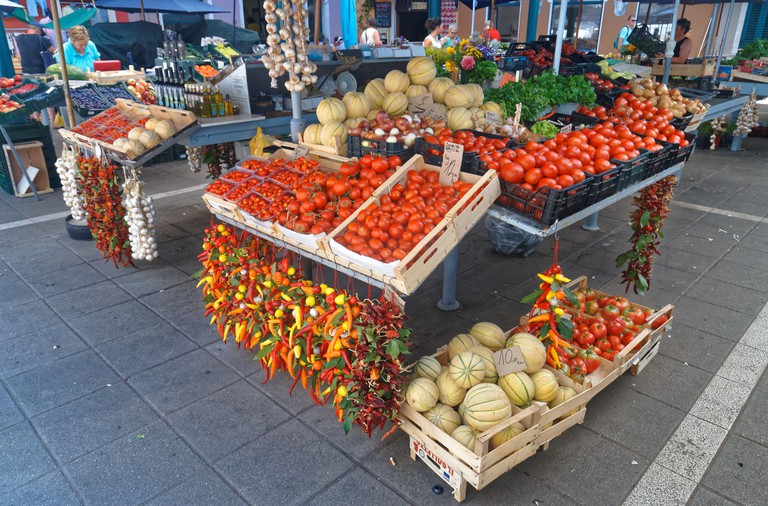 Rovinj Market | © Christoph Sammer/Flickr
Rovinj’s central market, beside a car park just in from the seafront, stocks olive oils, grappas, and honeys, along with fresh produce in season, always handy for the beach. It’s also handy for souvenirs, ceramics, jewellery and paintings, usually only during the summer, and a wander around the adjoining fish market is an education in itself.
Open In Google Maps
Ulica Giuseppea Garibaldija, Rovinj, Istarska županija, 52210, Croatia
Give us feedback 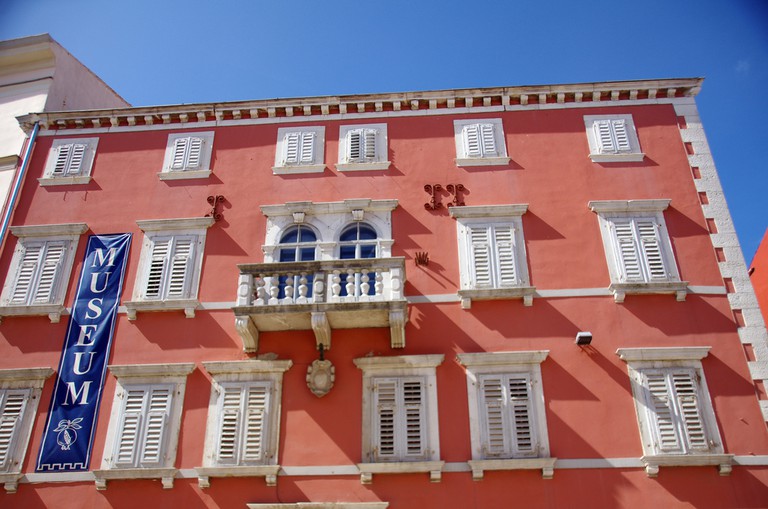 Rovinj Heritage Museum | © Donald Judge/Flickr
The holdings at the Rovinj Heritage Museum number more than 35,000 but don’t let that put you off – what’s on display is only a fraction of the permanent collection. Highlights include finds from the Roman era, fascinating maritime paraphernalia and Old Masters from the mansion of Habsburg industrialist and art collector Baron Georg von Hütterot, who lived on nearby Red Island.
Open In Google Maps
11 Trg Maršala Tita, Rovinj, Istarska županija, 52210, Croatia
+38552816720
Visit Website
Give us feedback

Being so close to Italy, both geographically and historically, Rovinj offers top-quality ice-cream from a small hub of outlets tucked in from the waterfront. On Piazza Campitelli, the Gelateria Italia is classic in every way, with outdoor tables and coffee also provided. Nearby Café Sport on the promenade itself also offers pastries while the B052 on Carera ulica probably has the best range of flavours. 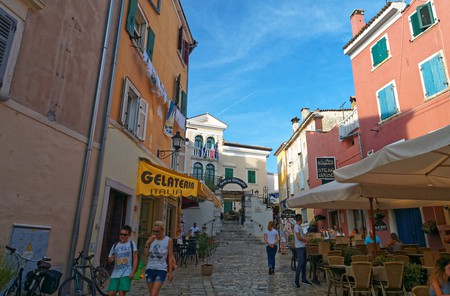 Following the undulating line of the waterfront, Rovinj’s seafront promenade changes its name several times – Obala Vladimira Nazora, Obala Alda Negria, Obala Alda Raimonda, Obala Pina Budicina – but is constantly entertaining at any time of day. Just off the coast beckons the island of Sveta Katarina while closer to shore, there’s usually activity amid the fishing boats and ferry terminal. This stretch of the coastline is far less crowded with bars and restaurants than on the other side of the marina, and you can easily find a spot to sit and watch the sea. 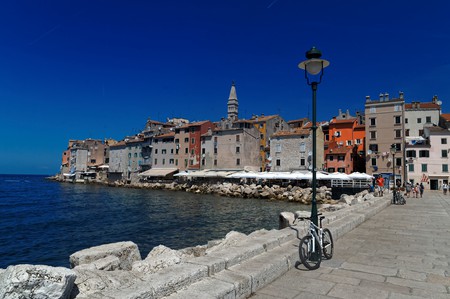 Running between the main square and St Euphemia’s Church, Grisia is more than just a sloping narrow street of boutiques displaying their wares – paintings, artisanal jewellery, sculpture – outside. Grisia is also a community of artists, which organises a day-long arts festival every August, when galleries and studios throw open their doors. 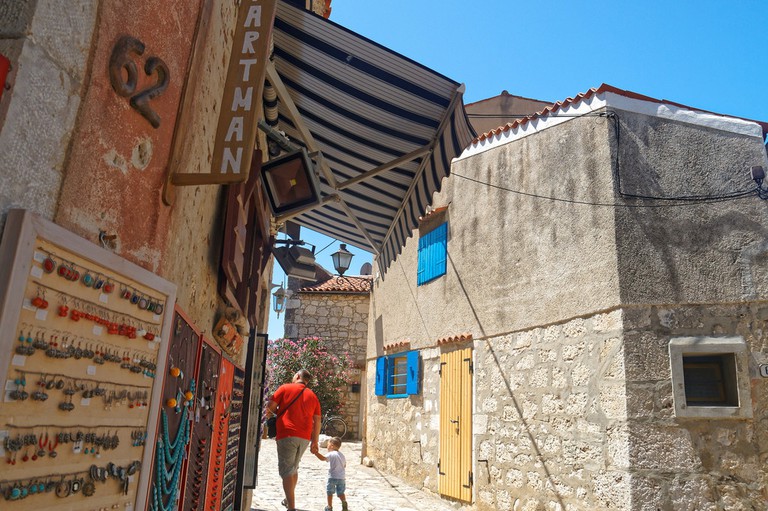 While so many of Croatia’s museums are old-school and, frankly, dull, Rovinj’s Batana is hands-on, entertaining and effortlessly educational. Focused on a type of fishing boat of the same name, the Batana tells the story of its role in local culture, with interactive exhibits, workshops and even opportunities to go be taken out in one. 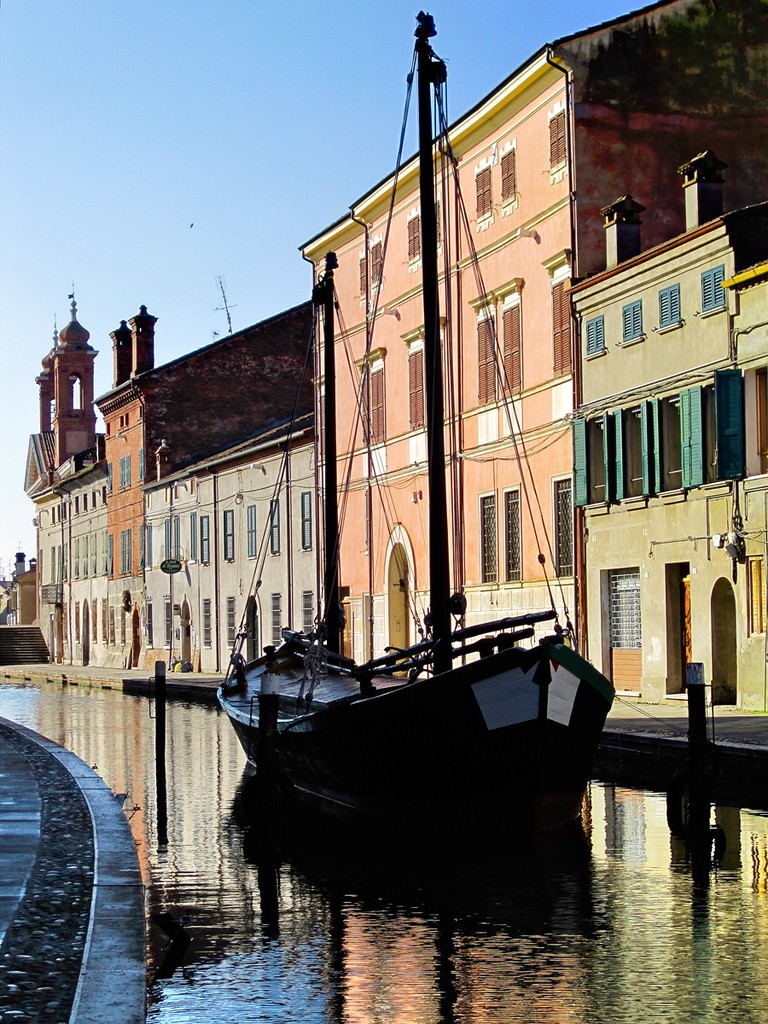 Once a simple tavern (konoba) as its name suggests, the Kantinon was overhauled in 2013 and has gone relatively upscale, without losing its maritime charm. Although prices have duly risen from rock-bottom to reasonable, this revamp has meant a considerable revision of the menu. No longer straightjacketed by narrow, run-of-the-mill tourist offerings, the Kantinon has delved deep into Istria’s culinary heritage to come up with different takes on dressing and accompanying the fresh seafood for which it is justifiably renowned. 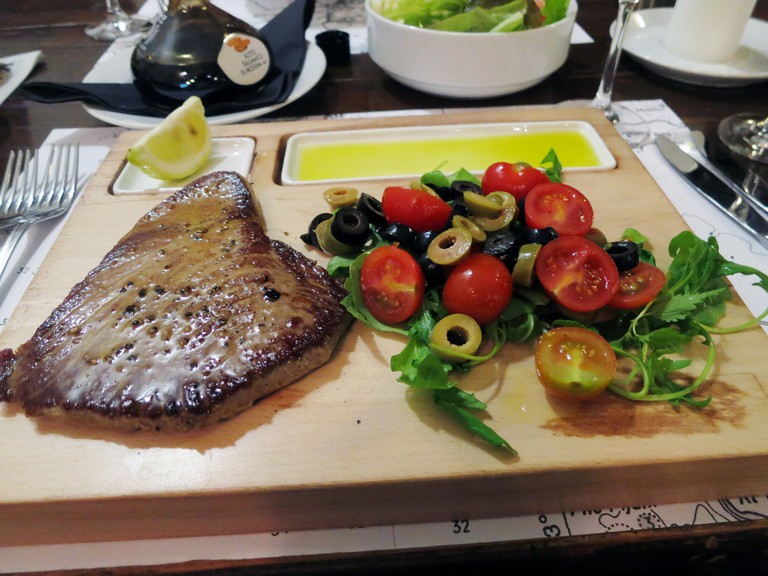 Set just off the Rovinj boardwalk, Sveta Katarina now contains a namesake hotel and recreation complex but with boats scheduled every 30 minutes, it’s also an easy destination for non-guests too. Filled with all kinds of plant life and lined with rocky beaches, Sveta Katarina is also the perfect vantage point to watch sunset slowly fall over Rovinj, whose historic buildings can be easily picked out on the horizon. 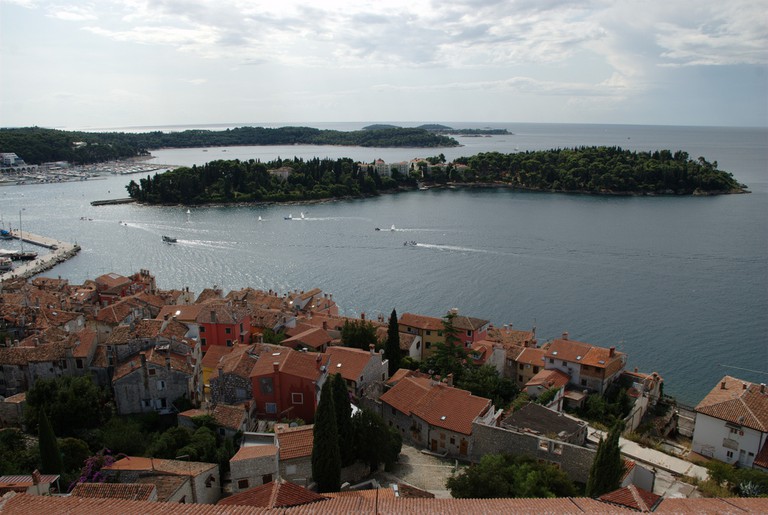