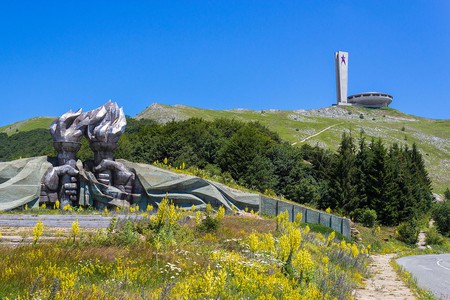 It’s impossible to miss the monolithic, gray, and often monstrous buildings left over from the Communist era while roaming through Bulgarian cities. Although the postwar modernism typical for architecture between 1945 and 1989 has been left behind, it still dominates the cityscapes in the Balkan country in both public architecture and residential buildings. Read on to delve deeper into the history and meaning of Communist architecture in Bulgaria.

The ‘flying saucer’ of Communism

The Buzludzha Monument is undoubtedly the international star of Bulgarian Communist architecture. The crumbling UFO-like building perched on top of Stara Planina Mountain has been featured in international media and attracts urban explorers from around the world because of its imposing yet strange shape. Its fate is still uncertain, and since the beginning of 2018 security guards make sure nobody enters illegally anymore, so you can now admire it only from the outside. 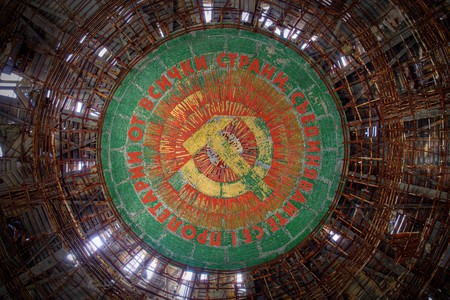 The ceiling of the main hall of Buzludzha Monument | © decar66 / Flickr

Concrete and metal were the main materials

Statues and gigantic monuments were built all over the country to remind people of the might of the Soviet Bloc and the ruling Communist Party. To demonstrate that Bulgaria was developing as an industrial country and to make people feel awed and insignificant at the same time, monuments were not only gigantic but predominantly built of concrete and metal, as if ready to crush anything at their feet. Shapes were rough; buildings didn’t have any ornamental decoration from the outside, while inside they often featured huge wall murals representing scenes from the partisan movement, political figures, or moments in Bulgarian history, also painted in a rough, sketched style. 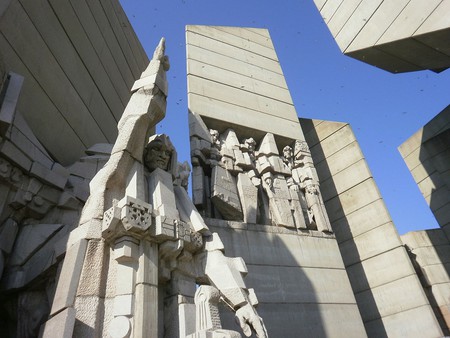 Residential buildings from the Communist era

If you have stepped outside of the city centers of the big cities, you may have noticed a peculiar phenomenon – many of the old residential buildings with crumbling facades have been “patched” with insulation in different colors. It seems like every flat owner has chosen a color without caring for the overall look of the building, and this is more or less the truth. What lies behind this fact is the history of the vast residential districts that were built during the Communist era in Bulgaria. The policy of turning a mainly agricultural country into an industrial one required many people from the villages to move to the cities, so the construction of the so-called panel blocks of flats started. These were known for being gray and stuffed with tiny flats, and the thin panels used for their construction meant that people could hear much of what happened in their neighbors’ flats. Many of these buildings were erected in the 1960s and haven’t been renovated since then, which explains their sad look today.

The curious story of the mausoleum of Communist leader Georgi Dimitrov

The only Bulgarian Communist leader who had a mausoleum built for him was Georgi Dimitrov. The structure was finished in the record-breaking time of six days while the mummified body of Dimitrov was transported from the Soviet Union to Bulgaria. After having been the main cult point of Communism for almost five decades, the mausoleum was destroyed at the end of the 1990s. The explosion intended to destroy it was conducted in the presence of the then-prime minister and broadcast on TV, but to everyone’s surprise, it only slightly tilted the monument. It took several more explosions over a few days in August 1999 to finally destroy the building. The mausoleum used to be situated just across from the National Art Gallery on Tsar Osvoboditel Boulevard in Sofia. 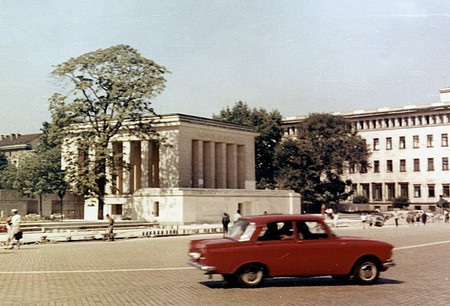 Some of the remnants of the Communist era have been removed from their original locations and preserved as pieces of art. Situated a bit outside of the city center and away from the main tourist attractions in Sofia, the Museum of Socialist Art displays a collection of artifacts and architectural details from that period. The main attraction of the museum is the huge red star that used to stand atop the Party building in Sofia. The museum halls host temporary exhibitions dedicated to various aspects of the ideological art.

Other ways to explore the Communist past of the country

If you are curious to learn about the everyday lives of people in the Communist era while riding a real Trabi, there is a themed Communist Trabant Tour you can take in Sofia. Although the tour does not specialize in architecture, the knowledgeable guide will draw the general picture of the era and immerse you as much as possible into its atmosphere. There are also a few private museums in the country tackling the topic of the Communist era and its impact on the life of people. The Retro Museum in Varna gives you an intriguing insight into the life of the time with a large collection of everyday objects, home appliances, and Communist-era cars, such as the Volga, Trabant, Lada, and others. The Museum of the Cars of Socialism is closer to Sofia, located in the small town of Peshtera, and also has a collection of everyday objects.