The Most Impressive Thracian Tombs in Bulgaria 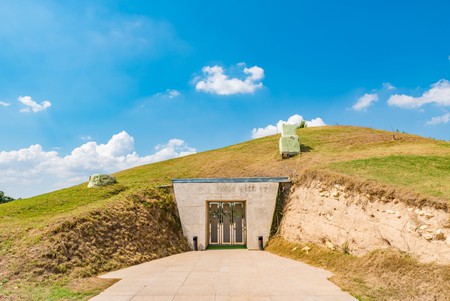 Today’s Bulgaria used to be the land of the ancient Thracian tribes. They are mostly unknown to researchers due to their lack of script, and many of the things we know about them are from foreign historians and the evidence left in their monuments: rock sanctuaries and tombs. Delving into the mystery of the ancient Thracians and their life and rituals is an engulfing and thrilling activity that can make for a separate themed trip to Bulgaria. Here are the most impressive ancient Thracian tombs in the country to get your itinerary started.

The Sveshtari Tomb has been put on the UNESCO World Heritage List for good reason – its interior ornaments of half-woman half-plant reliefs are the only ones found in a Thracian monument so far. It was built in the 3rd century BC and consists of three chambers. The decoration itself was inspired by the Hellenistic aesthetics that were incorporated into the beliefs of the Thracian people called Getes. The fact that the decoration is unfinished proves that the ruler who was buried in the tomb probably died before his eternal home was entirely built. The tomb is part of the Sboryanovo Historical and Archaeological Reserve where you can also see more Thracian tombs, along with the remains of a fortress and the blessed rock of Demir Baba.

Visiting the Sveshtari Tomb requires special effort since it’s located in northern Bulgaria with no transport connections other than private transfers. Note that the tomb is open from March 17 until November 30, every day from Wednesday to Sunday, from 9am to 5pm.

This is the tomb with some of the most impressive frescoes depicting hunting, feasting, clothing and other details of the everyday life of the Thracian kings. Because of its poor condition, the original tomb has been sealed, and a copy has been built a stone’s throw from it in the center of the city of Kazanlak. The tomb dates back to the 4th century BC and was plundered in antiquity. During the excavations, archaeologists have discovered parts of gold ornaments and bones of a horse buried with his owner.

Visit Kazanlak, the capital of the Bulgarian Rose Valley, in June to witness the month-long Rose Festival as well. There are dozens of other tombs around the town forming the so-called Valley of Thracian Kings. 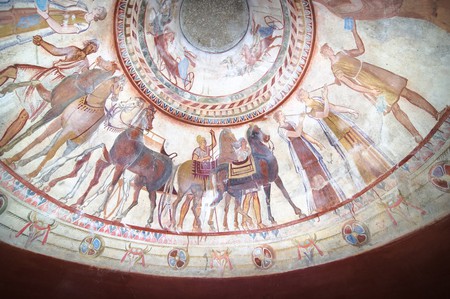 Detail of fresco in the tomb of a Thracian king, Kazanlak, Bulgaria | © ollirg/Shutterstock

A two-hour drive from Sofia will take you to the biggest Thracian king complex housing a mausoleum found in Bulgaria so far, at Chetinyova Mound near the village of Starosel. It was built for an unknown Thracian ruler and is part of a larger necropolis covering the area. At the complex, you can visit the big temple at Chetinyova Mound and Horizont Temple with its impressive columns where rituals dedicated to the sun were performed. If you want to see the findings from the Starosel Kings Complex, visit the National History Museum and the Archaeological Museum in Sofia.

Few tombs have survived untouched through the centuries, and it’s especially thrilling when archaeologists are able to find a king or noble person buried in it. This is what makes the Tomb of Seuthes III, or the Golyamata Kosmatka Mound, near Kazanlak a must-visit stop along your Thracian discovery route. The tomb comprises three chambers, the innermost of which was designed to look like a sarcophagus made of a single granite block. The 5th-century BC monument was first used as a sanctuary; later a Thracian aristocrat, probably the king of the Odrysian kingdom, Seuthes III, was buried here. You can see an extremely detailed bronze head of the king at the entrance to the tomb (the original is kept at the Historical Museum Iskra in the town of Kazanlak).

The Tomb of Seuthes III, near Kazanlak, Bulgaria 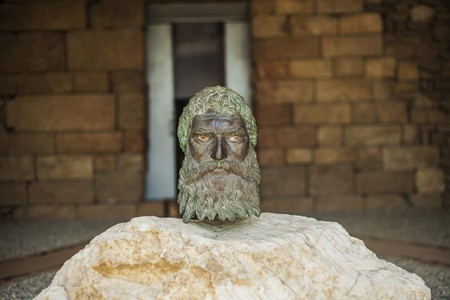 Replica of the Bronze Head of Seuthes III, the King of the Odrysian Kingdom of Thrace, found in the tomb Golyamata Kosmatka near Kazanlak, Bulgaria | © Gergana Encheva/Shutterstock

Ancient Thracian tombs were often used both as the king’s or family mausoleums and as sacred places where a cult to the dead person was observed. The tomb near the village of Mezek, close to the southern border of Bulgaria, is one of them. Archaeologists have discovered traces of six different burials, including one of a woman at the entrance. At the tomb, perfectly preserved in its original shape, you can see holograms of some of the treasures discovered during the excavations.

The Antique Beehive Tomb in Pomorie

The Beehive Tomb in Pomorie is another Thracian monument that is far from typical. The long corridor leads you to an impressive mushroom-shaped chamber covered in bricks. The central column in the middle is hollow, and it is believed to have been used as an exit with a staircase. Archaeologists believe that the tomb was used as a mausoleum for a rich local family rather than as a resting place for a single person. It also hosted religious rituals and ceremonies. The tomb is open from 9am to 5pm every day except Monday from June to September. In the winter, the tomb is open only upon request and for a group of a minimum of ten people. 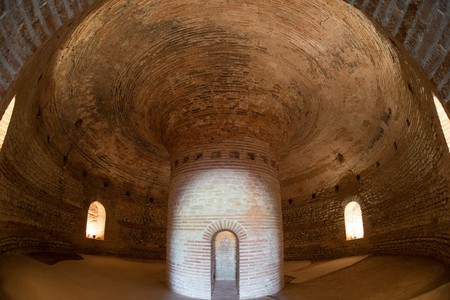 Alexandrovo Tomb is one of the biggest discovered so far in Bulgaria and contains some of the best-preserved frescoes. The battle and funeral feast scenes inside will help you picture what the ancient Thracians looked like, what their clothes and weapons were, as well as what they ate. A copy of the tomb has been built with an adjoining museum where you can learn more about the history and rituals of this ancient people. Alexandrovo Tomb is a good starting point for a trip exploring the Rhodope Mountains as well.