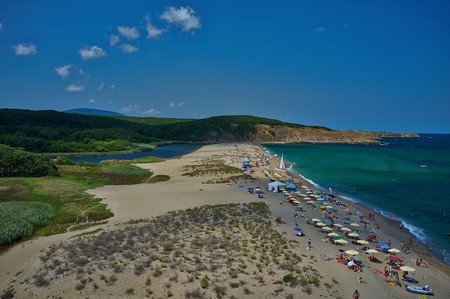 Bulgaria’s Black Sea coast is famous with Scandinavians, Germans, and Brits, but most foreigners head to the party beach locations such as Sunny Beach or Golden Sands. If you are more into quiet, naturally preserved seaside villages and hidden gems, head south, close to the Turkish border, to discover Sinemorets.

One of the most beautiful places around Sinemorets is where the Veleka River flows into the Black Sea via a stunning estuary. If you climb the hill just above, you’ll glimpse how the differently coloured waters swirl and mingle in the estuary. Veleka River itself is part of Strandja Nature Park and is bursting with life. Join a boat tour along the river to learn more about the area and to see the lush green woods on the riverbanks. 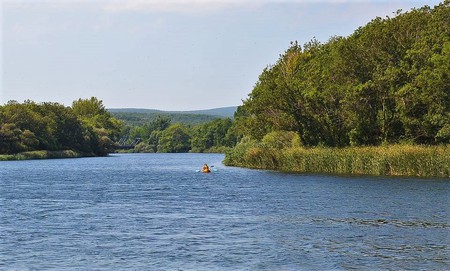 Discover the Ships (which are not actually ships)

Head northeast from Sinemorets to reach a rocky bay with a fishing pier where the so-called Ships are washed by the waves. The Ships are in fact several cliffs just offshore that look like man-made structures. The legend goes that this bay was where many ships were deliberately crashed and sunk when they became too old. The Ships are one of the photogenic hotspots in Bulgaria and you’ll often run into photographers here, especially at sunrise or sunset.

Up for a nudist beach?

The main beach of Sinemorets is called Butamyata but there are several nudist spots around for those who enjoy suntanning topless. Just across Butamyata, separated by a set of steep cliffs with a path to cross, is Lipite Beach – a tiny wild beach with nothing but sand and sea. The beach next to the Veleka Estuary is also frequented by nudists although you don’t have to take your bathing suit off to lounge here. 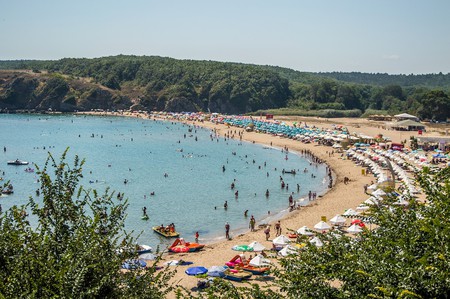 Hike along the coast

If you need some physical activity, head south of Butamyata Beach and hike along the coast which features peculiar rock formations (a canyon, Sisyphus’s Cliffs, the Cave of Pigeons). The path is not very steep but it’s advisable to put comfortable shoes on instead of flip flops. There are a few information boards along the route where you can read more about the formation of the coast. The route will take you to a protected area called Silistar where another little-known beach is located. 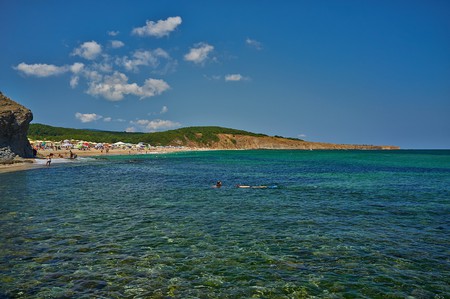 A view to Sinemorets from the cliffs | © Artur Malinowski/Flickr

Most of the restaurants in Sinemorets are located along the main street in the village. The Blue Shark serves mussels and fish fresh from the sea, and their homemade Tarama caviar is a must-try. Skritiat Maj (literally, The Hidden Man) is on a side street with many Bulgarian specialties on the menu and a spacious green garden.

Wherever you sit, you will need a reservation if it’s for dinner. Since you are on the coast, don’t leave before trying fish soup or the local summer favorite, deep fried tsatsa (European sprout).

Explore the nightlife…concentrated in only one bar

For years, Sinemorets has been known for its cult bar Koraba (The Ship). It is the only nightlife spot in the village and a place where you can mingle with a fun crowd of Bulgarians (many marketing and entertainment professionals among them) and just a few tourists. The view of the sea is gorgeous, especially at sunset, the prices are fair, and the music is something other than the EDM typically heard along the Bulgarian Black Sea coast.