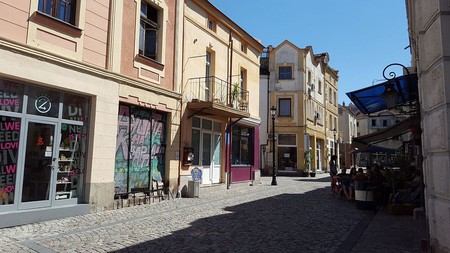 If you want to immerse yourself in the liveliest area in Plovdiv, head to the Kapana creative district. Until recently a neglected area in the center of Plovdiv, where the buildings were crumbling and the sidewalks were full of parked cars, today Kapana is the cultural heart of the city.

Kapana was formed as a trade quarter more than five centuries ago. It was the place in Plovdiv where you could find fur-dressers, blacksmiths, tailors, goldsmiths, and other craftsmen. It was a colorful place with people from all walks of life and of different nationalities. The heart of Kapana was Kurshum Han (Kurshum Inn), today the Hali trade center. 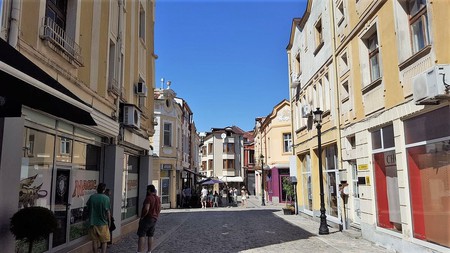 Things changed after Bulgaria gained its independence at the end of the 19th century. In the 1920s, new buildings in Secession and Neoclassical architectural styles popped up where the workshops used to be, and it turned into a residential area. In the 1970s, the local authorities were planning to destroy all the buildings and to completely restructure it into a modern trade center area, which, happily, didn’t happen because local architects united to defend its historical significance.

This is how we reach the 2000s, when Kapana was full of hollow crumbling edifices, narrow streets full of cars, and it was almost completely empty of life. Plovdiv‘s bid for European Capital of Culture was the main impulse that started the transformation of the area. Starting in 2014-2015, many of the buildings were reconstructed, the storefronts were turned into art galleries, art shops, craft beer halls, and wine bars, and the whole district was pedestrianized, thus turning into a favorite weekend destination for both Plovdiv dwellers and visitors of the city.

A visit to Plovdiv isn’t complete without a warm summer evening on the paved streets of Kapana, where many of the people who come for a glass of wine or a cocktail don’t mind having it in the street instead of inside the bars.

Kapana Fest is one of the major events that takes place at the Kapana every year with local and international artist concerts, an art bazaar, movie screenings, theatrical performances, and book presentations. One Design Week, One Architecture Week, and One Dance Week, three of the major cultural festivals in Bulgaria, changed their location from Sofia to Plovdiv, and in recent years they have been held in Kapana. In 2019, Plovdiv will be European Capital of Culture and many of the special cultural and art events are expected to take place in Kapana.