Paneurhythmy: The Mystical Dance of the White Brotherhood 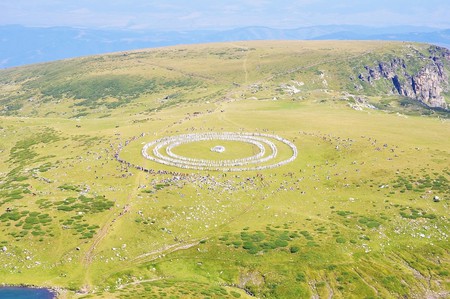 If you happen to visit the Seven Rila Lakes in mid-August, you will see big circles of people all dressed in white performing a special set of dances and exercises by the lakes. These are followers of the Universal White Brotherhood movement, who dance the paneurhytmy, connecting to each other and to nature. Read on to discover the history behind the dance and its philosophy.

Paneurhythmy originates from the spiritual teachings of Peter Deunov, also known as Beinsa Douno (1864-1944), the most influential Bulgarian spiritual leader, who created his own form of esoteric Christianity. He based his teaching on the connection between body and spirit, but he also gave lectures in astrology, geometry, religion, and philosophy. Although he traveled across the country giving lectures at the beginning of the twentieth century, he is still a popular figure nowadays, and you can find books containing his philosophy in any bookshop. 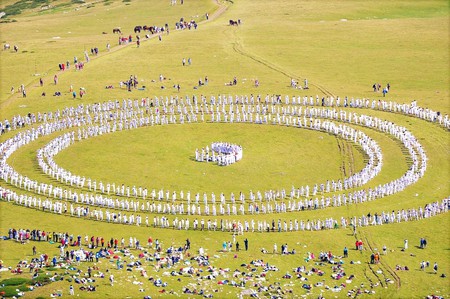 The White Bortherhood at the Seven Rila Lakes | © borosara / Pixabay

Meaning of the word paneurhythmy

The word paneurhythmy is derived from three roots: “pan” means “whole, cosmic”, “eu” stands for the true meaning and essence of things, and “rhythmy” conveys the idea of moving to the rhythm of special music. The whole word paneurhythmy is often explained like a supreme, wholesome cosmic rhythm—the rhythm synchronizing man and nature.

Symbolism of the dance

Paneurhythmy is performed to the sound of special music by the followers of the White Brotherhood, who sing special words as well. It is danced in the mornings throughout spring, summer and fall. The whole set comprises 28 exercises named “Awakening,” “Ascending,” “Purifying,” “Liberation,” “The Rising Sun,” “Joy of the Earth,” and others. There are two additional exercises that were later added to the set by Peter Deunov – “Sunrays” and “Pentagram.”

In the exercise “Sunrays” for example, the dancing participants say, “Mother, you gave birth to a beautiful person… This is heaven, this is heaven.” In this particular dance, some of the people stand in the form of twelve rays, while the rest form a circle around them, thus symbolizing the sun. Every single movement, like clapping hands or imitating a flying butterfly, adds to the philosophical meaning of extending your awareness beyond your personal life and focusing it on universal love. When performed by many people, paneurhythmy is often danced in circles, thus symbolizing the unification between human beings and nature. 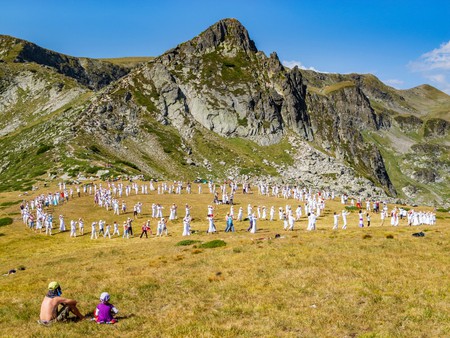 Paneurhythmy at the Seven Rila Lakes

It is said that Peter Deunov first took his disciples up in the mountains to the Seven Rila Lakes at the end of the 1920s. Now on August 19, this is the place where you can witness, in the greatest scale, the beauty of the dance performed by hundreds of White Brotherhood followers from around the world. The date marks the New Year for the followers and is celebrated by greeting the rising sun from the plateau above Kidney Lake (one of the Seven Rila Lakes). Followers also read excerpts from the Gospel and from Deunov’s lectures and dance paneurhythmy for more than an hour. If you want to see this spectacular dance, be there around 10 in the morning.