How to Experience the Narrow-Gauge Train in Bulgaria 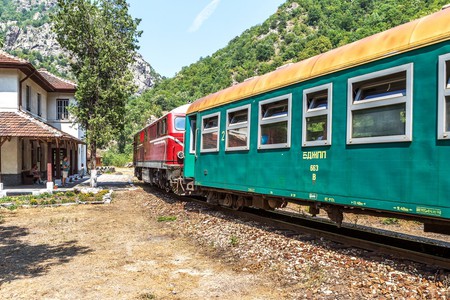 Travel back in time on a scenic old time-style train that will take you across a series of mountains in Bulgaria. Only one of the several narrow-gauge train routes in the country has survived up to today, connecting people who live between the town of Septemvri and the mountainous town of Dobrinishte. Here’s everything you need to know about this unique ride.

The narrow-gauge train (tesnolineika in Bulgarian) covers a route of 125 km (77 mi) across the Rila and Pirin Mountains and the Rhodopes. The trip takes about five hours, which makes the average speed a mere 25 km/h (15 mph). Urban legends have it that the slow speed allowed young lads in the past to impress their ladies: they went to the first carriage of the train, jumped off, picked flowers along the tracks and then hopped back on the train at the last carriage.

The space between the carriages is open, so you can actually feel the wind in your hair or wave to the fishermen you see along the way. Since 2018, the train has had a café carriage, so you can sip a cappuccino or indulge in a beer while you enjoy the hairpin turns and choose the landscape for your next photo from the window. 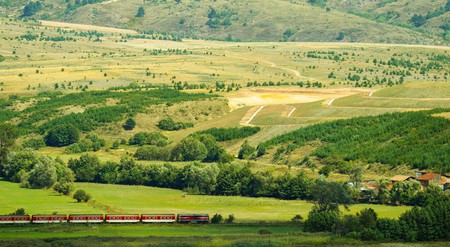 Interesting train stations along the route

The route itself passes through interesting towns and villages, some of which are worth visiting. Velingrad is known for its mineral springs and spa hotels of all ranges, from luxury to affordable. The town was named Balkan Spa Capital a few years ago and is one of the best places in Bulgaria to turn a weekend into a wellness retreat.

At an altitude of 1,267 meters (4,157 ft), Avramovo’s railway station is the highest in the Balkan Peninsula. While there’s nothing special in the village itself worth getting off the train for, you can add this fact to your list of travel achievements.

Belica (also spelled Belitsa) is the town known for its bears. Until the 1990s, there used to be many people in Bulgaria whose job was to tame and train bears and travel around the country with a bear dancing show. The animals were often kept in terrible conditions, aside from the fact that they were kept in captivity. This practice was officially banned, and since the trained bears couldn’t adapt to life in the wild, in 2000, they were all gathered in a specially built recovery center in Belica. The Dancing Bears Recovery Park is open to visitors, and you can take a tour every half hour. The entry fee is 6BGN (€3) for adults and 3 BGN (€1.50) for children.

Razlog and Bansko are close to the end of the railroad line and most crowded in the winter because of the many excellent ski slopes near Bansko. If you are not into winter sports, though, don’t pass up a chance to visit the two towns in summer, when you can explore Pirin Mountain’s many jaw-dropping trails, cliffs, and peaks. Koncheto is a ridge that will accelerate your pulse at you gaze at the steep rocks on either side of you while you are clinging to a metal handrail. 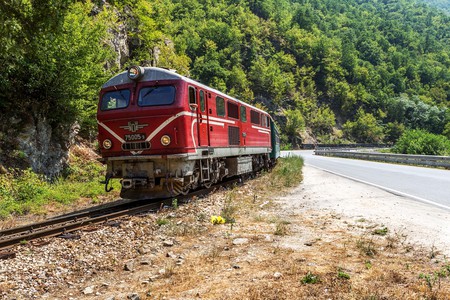 How to get tickets for the narrow-gauge train

You can buy tickets for the narrow-gauge train at any train station in Bulgaria (unfortunately, they are not available online). You can check the schedules on the website of the Bulgarian State Railways. The route you need to check is Septemvri – Dobrinishte. If you come from Sofia or Plovdiv, first you need to take a fast train to Septemvri (there are several available daily with good connections to the narrow-gauge train). The five-hour journey and the train schedule mean you should plan at least two days for the trip with an overnight along the route. You can find additional useful information in English about the narrow-gauge train here.