Christo and Jeanne-Claude: Partners in Art and Crime

Bulgarian-born Christo Javacheff and his wife Jeanne-Claude chose to pursue an artistic career away from sheltered museums, out in the wild. Their signature technique is concealing or ‘wrapping’ public objects, from oil barrels to museums. Controversy around their project Over the River in Colorado has put the spotlight back on their awe-inspiring, monumental projects. 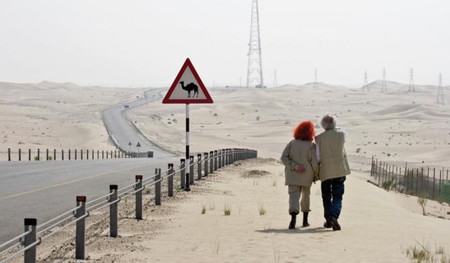 Christo Javacheff was born in Sofia on June 13, 1935 – the same day as his wife and art partner Jeanne-Claude Denat de Guillebon. After studying at the National Academy of Art Sofia, he moved to the Czech Republic where he worked for the legendary Burian Theatre (now the Archa). In 1956, the Hungarian Revolution sprang up, forcing Christo to move further west, first to Austria, where he studied for a short term, then Switzerland and finally Paris where he found refuge having lost his Bulgarian citizenship. In October 1958, the artist was commissioned to capture a portrait of Jeanne-Claude’s mother. This would mark the beginning of a lifelong relationship between Christo and Jeanne-Claude, on both artistic and personal levels.

At the time he met Jeanne-Claude, Christo had already found his signature style, wrapping furniture, packages and oil drums. The collaboration with Morocco-born Jeanne-Claude would allow him to replicate this concept on a much larger scale, while also expressing political and environmental concerns. One of the couple’s most notorious works was the wrapping of the Reichstag in Berlin. It took them years of restlessly lobbying of German MPs before the project was even considered. After a 70-minute debate followed by a vote in parliament, they were finally granted authorization, and the Wrapped Reichstag was completed on June 24, 1995. It required 90 professional climbers, 120 installation workers, 100,000 square meters of thick woven polypropylene fabric and 15.6 kilometers of blue polypropylene rope. Other major works include: The Pont-Neuf Wrapped (1975-85) in Paris, The Gates (2005) in Central Park, New York, and Surrounded Islands (1983) in Florida. The latter consisted in surrounding various islands in the Biscayne Bay with pink woven polypropylene fabric that floated on the water, with the aim of ‘underlining the various elements and ways in which the people of Miami live – between land and water’. 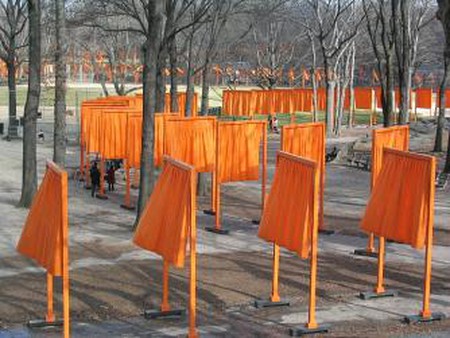 No other work was perhaps as political and controversial as the early 1962 Wall of Oil Barrels, Iron Curtain – pertinently named in reference to the Cold War. The couple caused a stir in Paris’ 6th Arrondissement when they blocked the tiny Rue Visconti with oil barrels to express their opposition to the Berlin Wall. After bargaining with police officers, the couple obtained permission for their installation to remain in place for a couple of hours.

A major aspect of the couple’s work required intense negotiations with local authorities in order to obtain permits and authorization. Christo and Jeanne-Claude have often faced major resistance from either the public or the government because their works tend to raise ecological and security concerns. As a result, each project requires careful research and expertise, as well as strategic powers of negotiation. Their most recent project, Over the River, has been severely delayed because of fierce public opposition. The work will include 9.5 kilometers of silvery translucent fabric panels suspended high above the water in eight separate areas along a 67.6 kilometer stretch of the Arkansas River between Cañon City and Salida in southern Colorado’. The artists have made clear on their website that ‘the stream of successive fabric panels will be interrupted by bridges, rocks, trees and bushes’ for both aesthetic and technical reasons. Although they started planning this project in 1992 – spending two years exploring the Rocky Mountains in order to find the most appropriate spot – it was only in 2011 that the US Department of the Interior granted permission after a tempestuous legal battle. Interior Secretary Ken Salazar justified the decision by arguing that the work will ‘draw visitors to Colorado [and] support jobs in the tourism industry’. Jeanne-Claude sadly passed away in 2009 at age 74, but Christo is resolutely carrying the project forward, having announced that it will open to the public by 2015. 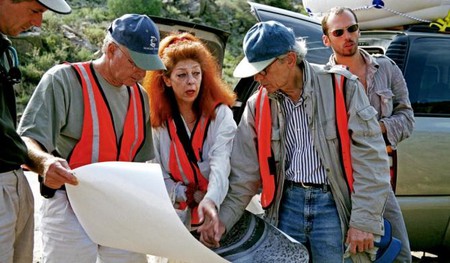 Working alone might present a challenge for the artist. The couple had a systematic and effective way of working together, especially after Christo began to credit their works to ‘Christo and Jeanne-Claude’ as opposed to just ‘Christo’ in 1994. While they usually conceived the projects together, Christo took care of the artistic aspect, realizing the preparatory work and the drawings. During the ‘construction’ phase, a team of paid assistants were responsible for the wrapping, while Jeanne-Claude took charge of the fundraising. She raised money by selling her husband’s sketches to museums, collectors and galleries. Strongly attached to their artistic freedom, the couple always refused external sponsorship and relied on self-financing. Jeanne-Claude often said that there were only three things they never did together: ‘fly in an airplane (they took separate flights), make sketches (Christo’s job), and manage their taxes (Jeanne-Claude’s job)’.

Perhaps the biggest challenge that Christo and Jeanne-Claude have faced was the struggle to have their wrappings recognized as works of art. While the idea is certainly original, many critics have argued that their projects are merely an industrial, repetitive process void of any intellectual significance. This notion goes back to the perennial ‘What Is Art?’ problematic, a familiar question for many contemporary artists. Nevertheless, these visually arresting wrappings have all been widely visited and admired once revealed, and their monumental yet ephemeral beauty will likely be remembered for years to come.