7 Hearty Dishes That Bulgarians Love to Eat in the Fall 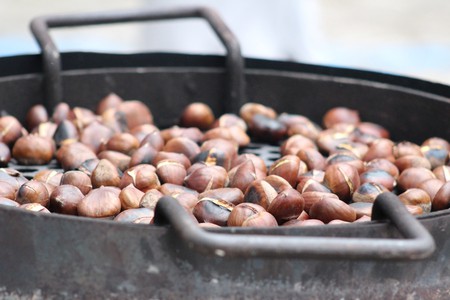 Fall is delectable in Bulgaria, as mouthwatering aromas of roasted chestnuts and baked peppers waft through the air. If you visit Bulgaria in the fall, don’t just stick to the food essentials like grilled kebapche and Shopska salad – these can be found everywhere year-round. Delve deeper into the Bulgarian culinary world by tasting the season’s favorites.

While in many countries, pumpkin goes in soups and savory dishes, in Bulgaria it is traditionally consumed as a sweet dish, with the locals’ favorite being big chunks of pumpkin baked in the oven with sugar (or honey), cinnamon, and walnuts on top. On the streets of the big cities, you will see street vendors selling open-fire roasted pumpkin, whose intense smoky taste makes it even better.

The other way to indulge in the fall tastes of Bulgaria is to look for tikvenik – pumpkin-filled banitsa. The pumpkin is grated in advance and mixed with cinnamon and sugar. Then it is used as a filling of thin “sheets” of pastry and baked in the oven.

When you see turshia on the table in Bulgaria, you know winter is coming. A mix of cabbage, cauliflower, carrots, peppers, and parsley is marinated in vinegar and salt for a few weeks and then served. The sour cold-season salad is the perfect companion of rakia, the local strong spirit Bulgarians love to have as an apéritif before the main dish.

When the first cold days set in, the sun disappears for days, and the overall mood slumps, there’s nothing more heartwarming than the smell of roasted chestnuts in the streets. Head to the nearest market to find both raw and roasted chestnuts.

There’s an underground Bulgarian song, saying “the summer is not real anymore as soon as you can smell baked peppers.” These lyrics refer to the Bulgarian tradition of preparing conserved food supplies for the winter with peppers being the central piece. Bulgarians bake, boil, roast, and mince peppers to turn them in all sorts of cold-season appetizers. One of the best recipes includes baked peppers conserved in a jar with vinegar, garlic, and parsley.

Talking about winter food supplies, a typical sight during the months of September and October wherever you travel in the Bulgarian countryside is lyutenitsa being prepared. Bulgarians have this tomato, red peppers, and eggplants spread with almost every meal – as a side dish to their grilled meat, just spread on a slice of bread, or in a sandwich. If you go to a supermarket, you will see a whole wall dedicated to tens of brands of lyutenitsa. You can easily call lyutenitsa a year-round dish but in the fall, everyone is eager to try the new vintage.

This is another traditional salad prepared with baked eggplants and baked peppers mixed with fresh tomatoes (or tomato sauce), fresh green herbs, garlic, and nuts. Kyopoolu makes for a great, hearty dinner if you add garlic bread and red wine to it.