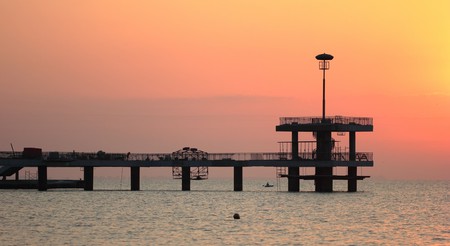 Burgas has so much to offer: from beaches and salt lakes with pink lye to urban legends (the Gramophone ‘knows’ the name of your lover). Here is a list of the best attractions in Burgas that will turn your visit in an unforgettable adventure.

Atanasovsko Lake is a local favorite for its curative mud and lye. You can lie in the pools of lye and then apply black mud on your skin. The beach is less than 100 m (300 ft) away, and there are showers. There is a free parking lot, but you can also reach the area on foot or by bike through the Seaside Park (Burgas has an urban bicycle rental system).

The Atanasovsko Lake is a busy bird-watching spot too—316 out of a total of 423 bird species found in Bulgaria can be spotted here. The lake is hyper-saline and has been used for extracting salt for more than a century. 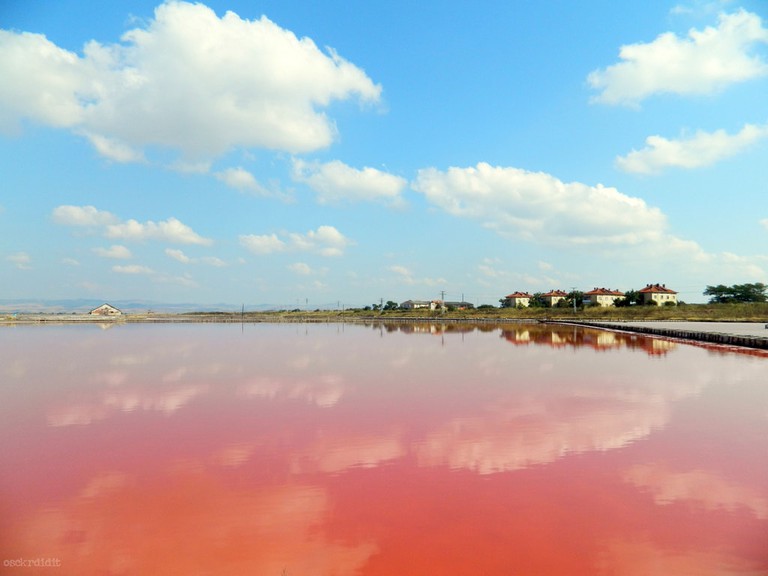 Aquae Calidae is a walk through the history of mineral water and SPA for the last 2,000 years. Almost 2000 years ago, a Roman town called Thermopolis existed here, with baths with a hot and a cool pool. Later, in the 1500s, the Ottoman sultan Suleiman the Magnificent built his baths here, and today you can see a fine restoration of his recreation center, with a 3D mapping movie telling the story of the area.

One of the symbols of Burgas, the Pier stretches almost 300 m (1000 ft) into the sea, offering a relaxing walk with occasional salty splashes of water. The latter don’t scare away the couples holding hands or exchanging hugs by the terraces at the viewing platform at the end of the walk. 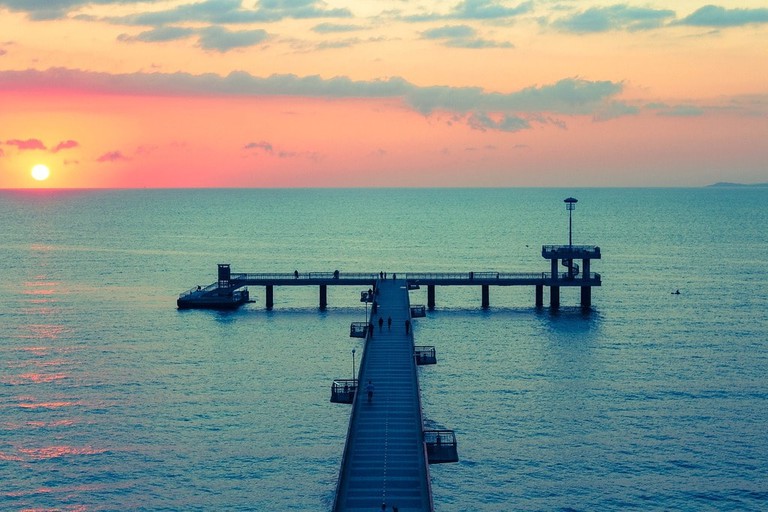 The Pier in Burgas | © anestiev/Pixabay

The Gramophone is a 2-m (6.5 ft) sculpture in the city center, one of the symbols of Burgas and a popular meeting point. Legend says that if you turn the handle and listen really, really carefully, you will hear the name of the one who loves you.

You can’t visit the lighthouse, but it’s an important symbol of the city. It is more than 100 years old and shows the way to ships entering the biggest port in Bulgaria. You can see it from the Pier. 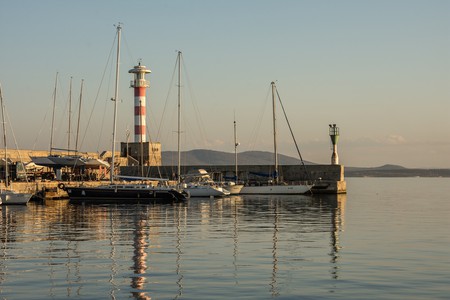 The Lighthouse in Burgas | © anestiev/Pixabay

Recently renovated, the Sea Garden of Burgas is shady and bursting with colorful flowers, along the coast. There are hotels, cafes, restaurants, and exposition centers in the garden, as well as ice cream carts to cool down on a hot summer day and hammocks, for a little laziness.

The Sand Festival is held annual, and takes place all summer long, usually from June till the end of September. Every year the figures are united by a single topic: cinema characters, safari, fairy tales, carnival, etc. The festival area is located at one of the corners of the Sea Garden in Burgas. 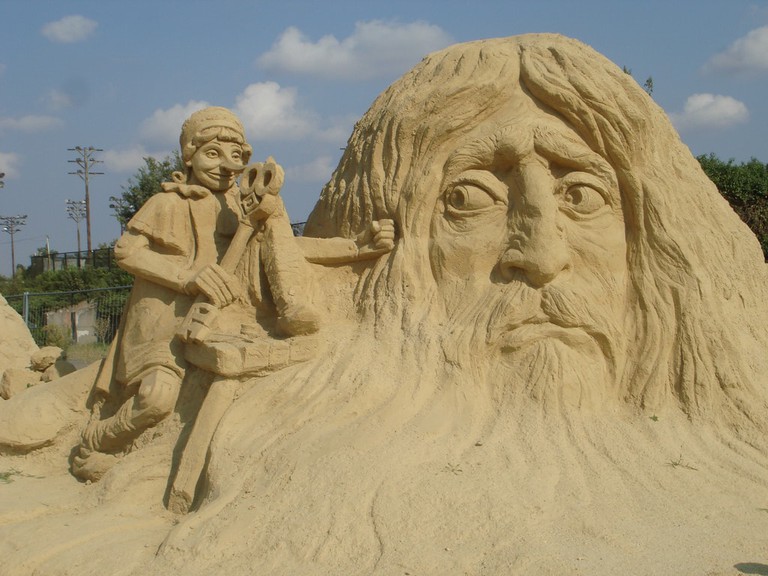 Burgas has a long, wide beach stretching along the Sea Garden, with many beach bars and restaurants where you can try fresh fish and local delicacies. If you want to see more Black Sea coastal life, head for Sunny Beach, Nessebar or Sozopol.

Expo Center Flora is located in the Sea Garden, and is home to a major flower exhibition twice a year. The building was voted Building of the Year 2015, and is surrounded by a lot of greenery, garden designs and a book cafe.

One of the highlights of Burgas is a trip to Saint Anastasia island, which used to be a pirate den, a monastic retreat and a prison. Items of the island’s history are collected in a well-organized exhibition in the former monastery. The island is tiny, and the boat tour will leave you with around two hours to have a look, drink tea (hand picked from the island) or lunch on local fish. If you want more of this island life, book a night at the small hotel. Making an advance reservation for the ship is a good idea, especially in the busy summer months. 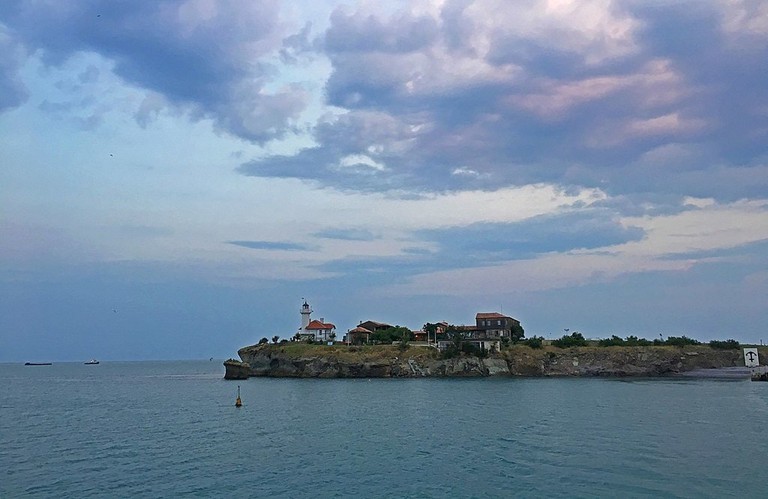 The Sea Casino was built in the 1930s; the opening ceremony lasted a whole week and everyone who wanted to see it could travel to Burgas by train with a 70% discount on the ticket. After a long period of decay, in 2011 the casino building was renovated and reopened as a contemporary cultural center. Now, you can see concerts, shows, and movie screenings. It is situated in the Sea Garden, and has a magnificent view to the sea.

Poda is a protected area and heaven for birdwatchers. There is a specialized optical equipment and a 7-m (23-ft) tower to peek into the life of the birds. Its name comes from the word ‘pod’ – a wooden raft drawn by rope used to cross the Mandra Lake a century ago (today you don’t need a raft). It is located south of the city center, on the side of the main road to Sozopol, and it features a small visitor center. 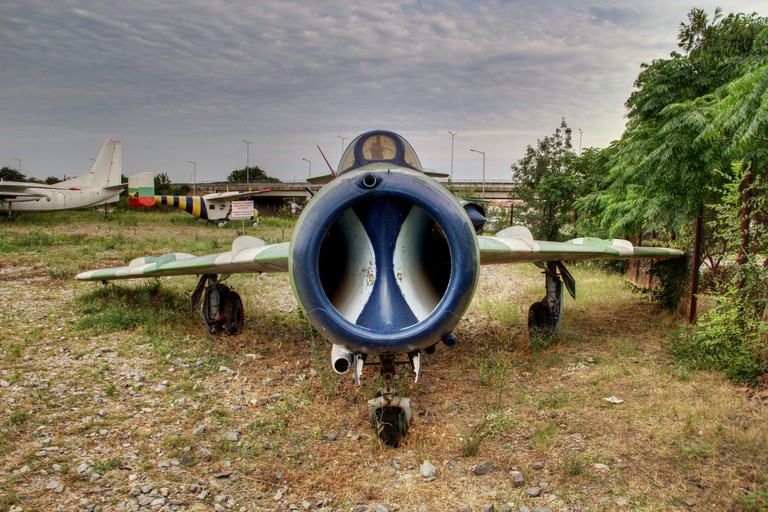 The Museum of Aviation | © Велислав/Flickr
At one of the newest attractions in Burgas, you can see and explore the inside of nine airplanes, and also put on VR glasses and turn into a pilot. The museum is located near the airport.
Open In Google Maps
Burgas Airport, Burgas, Burgas, 8007, Bulgaria
+359885009673
Visit Website
Give us feedback

Museum
Facebook
Email
Twitter
Pinterest
Copy link
Share
Map View
Take a trip back in time and enter the beautiful 19th century house where the Ethnographic Museum of Burgas is located. You will see what the life, work and celebrations of Bulgarians was like two centuries ago, and some of the most enticing Bulgarian traditions, like Kukeri, old-time weddings, and spring love rituals.
Open In Google Maps
69 ulitsa "Slavyanska", Burgas Center, Burgas, Burgas, 8000, Bulgaria
+35956842587
Visit Website
Give us feedback

Museum
Facebook
Email
Twitter
Pinterest
Copy link
Share
Map View
The History Museum of Burgas keeps the treasures of the past, such as books, Orthodox icons, and European fine and applied art from 18th and 19th centuries. You will hear the story of how Burgas started developing into a modern European city after Bulgaria was liberated from Ottoman rule in 1878. The World Scripts exhibition explains how some of the most interesting scripts from around the world were formed: Egyptian hieroglyphs, cuneiform script, the Cyrillic alphabet, the Latin letters, and so on.
Open In Google Maps
69 ulitsa "Slavyanska", Burgas Center, Burgas, Burgas, 8000, Bulgaria
+35956842582
Visit Website
Give us feedback

Museum
Facebook
Email
Twitter
Pinterest
Copy link
Share
Map View
Some of the most mysterious people to have lived in Bulgaria throughout the centuries were the Thracians. With their imposing tombs, secret rituals and sophisticated golden treasures, their culture is worth learning about. See archaeological finds from the time of the Thracians, the Greek colonies on the Black Sea, and the Roman times.
Open In Google Maps
21 bulevard "Aleko Bogoridi", Burgas Center, Burgas, Burgas, 8000, Bulgaria
+35956843541
Visit Website
Give us feedback

Museum
Facebook
Email
Twitter
Pinterest
Copy link
Share
Map View
This museum shows the flora and fauna of the Black Sea and nearby Strandzha Mountain, the bird life in the Burgas area and along Via Pontica (one of the most important migration routes of the birds in Europe), and a stone collection. The four museums—the Natural History, the History, the Archaeological and the Ethnographic museums—are all located in the same area, only 3-4 minutes walk apart, so they are convenient to visit at the same time.
Open In Google Maps
30 ulitsa "Konstantin Fotinov", Burgas Center, Burgas, Burgas, 8000, Bulgaria
+35956843239
Visit Website
Give us feedback

This is the main cathedral in Burgas, and dedicated to the two brothers Cyril and Methodius, authors of the Cyrillic script. The church was designed by Italian architect Ricardo Toscani, while the stained glass is the work of the same artist who created that in the Saint Alexander Nevski Cathedral in Sofia. 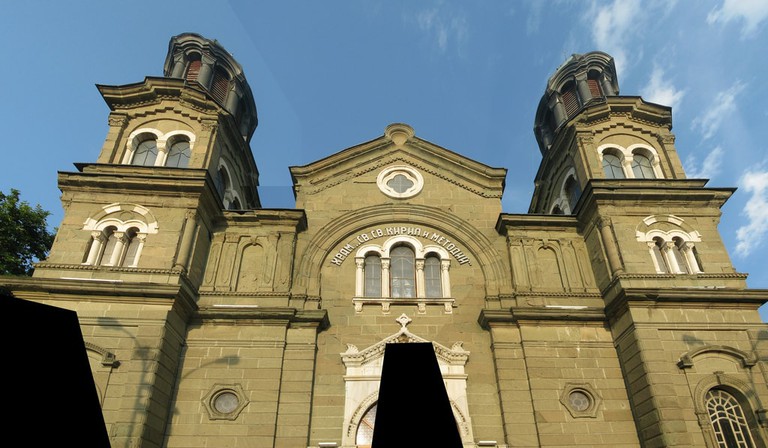 Markeli Fortress was long situated on the border between Byzantium and Bulgaria, and was where in 792 a major battle was fought between the two countries. Nowadays, you can take a tour at the fortress and discover its history. It is located 60 km (37 mi) from Burga,s on the side of the main A1 highway.

DiVes Winery near Burgas | Courtesy of DiVes Winery
Join a wine and history tour in DiVes Estate Winery to taste Bulgarian wines with a panoramic view of the seashore. DiVes Estate is located a 30-minute drive from Burgas, on a hill believed to be the strategic spot from which the Bulgarian king (tsar) Simeon the Great led one of his most important battles, in 917. A monument called The Eye of the Victor commemorates the event. Enjoy the exquisite aromas of the wines and learn for yourself why they have won so many international prizes.
Open In Google Maps
Поморие, Бургас, 8210, Bulgaria
+35932512925
Visit Website
Give us feedback
Give us feedback