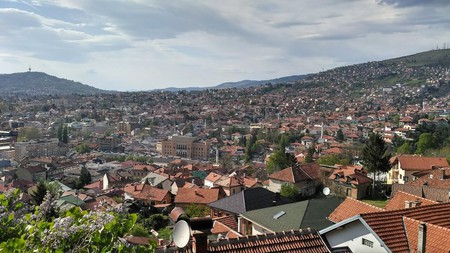 Sarajevo is a fascinating place full of history. It’s the city where the First World War started, it suffered from the longest siege in modern history, and was subjected to 400 years of Ottoman rule and half a century of Austrian rule. Here are some historic sites that you must visit while in Sarajevo.

Bascarsija, or Old Bazaar, is the historical and cultural centre of Sarajevo. Built in the 15th-century after Isa-Beg Ishakovic founded the town, little has changed in the last 500 years. Cobblestone streets bend and twist and alleys branch in all directions.

Historical attractions include Gazi Husrev-beg’s Mosque, the Sebilj Brunnen Fountain, and Copper Street. A fire in the 19th-century destroyed about 50% of Bascarsija. 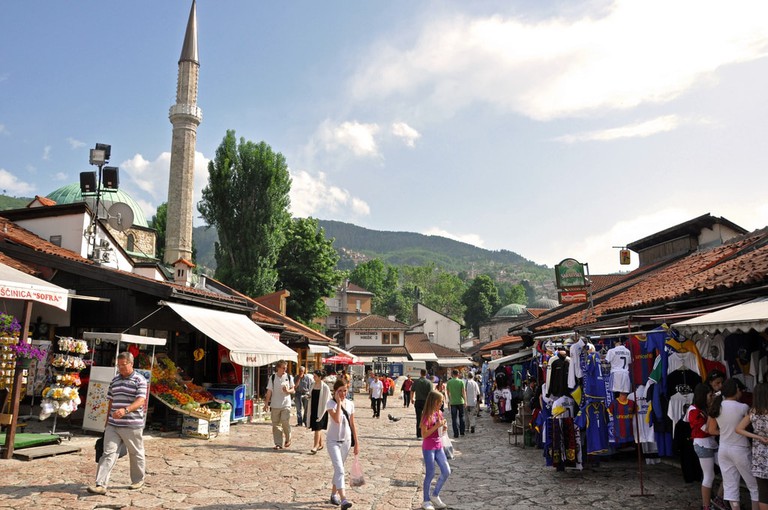 Mosque
Facebook
Email
Twitter
Pinterest
Copy link
Share
Map View
This Mosque is a major landmark and the most important Ottoman structure. Persian architect Adzem Esir Ali designed it in honour of then-Governor Gazi Husrev Beg, in 1530. Architecturally, the distinctive multiple domes correspond to Classical Ottoman styles. Damage during the Siege of Sarajevo destroyed most of the original masonry.
Open In Google Maps
8 Sarači, Sarajevo, 71000, Bosnia And Herzegovina
+38733532144
Give us feedback

Sitting in the centre of Bascarsija Square, the SebiljBrunnen Fountain is an icon of Sarajevo. Mehmed Pasha Kukavica designed the wooden fountain in 1753. It provides locals with drinking water. During the evening, Sebilj lights up, creating a magical atmosphere against the backdrop of surrounding Ottoman buildings. You almost feel like you’re back in the 18th century. 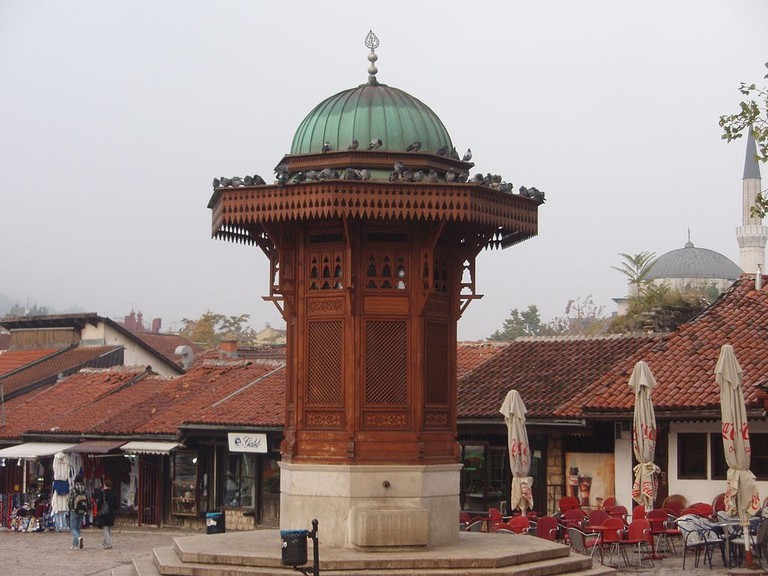 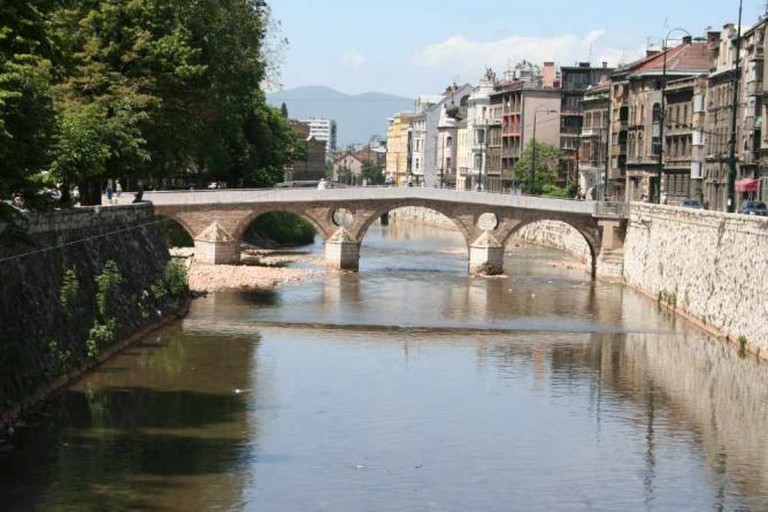 Latin Bridge | Ⓒ Sean Long/Flickr
The triple-arched Ottoman-style Latin Bridge has a fascinating history. A bridge crossed the Miljacka River since the 16th century, which is Sarajevo’s oldest preserved crossing. From a distance, the architectural beauty and majesty of Latin Bridge masks its dark history and involvement in the deaths of more than 16 million people. Serb Gavrilo Princip assassinated Archduke Franz Ferdinand of Austria in 1914 on this spot; it was the precipitating factor for the start of World War One.
Open In Google Maps
bb Obala Kulina bana, Sarajevo, 71000, Bosnia And Herzegovina
+38733238886
Give us feedback

As one of the oldest places of worship in Sarajevo, the Serbian Orthodox Church stands proudly on MulaMustafeBašeskije, to the north of Bascarsija. Records suggestthat anearlier church, dating from theChristian Kingdom of Bosnia (1154–1377), is underneath the 16th–century building.

For a fee of 2KM ($1.20) you can enter one of the most significant Orthodox museums in the world. Displays include old coins, weapons, and the rare Sarajevo Edict of 1307.

The Ashkenazi Synagogue has a sad story to tell. In 1902, the Synagogue was the third largest in Europe, serving more than 10,000 Jewish residents. Today, fewer than 700 remain, and only about 30 people attend on Yom Kippur, the holiest day of the year.

Since expulsion from Barcelona in the 14th-century, the Ottomans welcomed Jews despite their religious differences. Sarajevo’s first community arrived in 1541. Professional and highly educated Ashkenazis came to Sarajevo 200 years later. But, 85% of their population died in the Holocaust. Survivors fled and didn’t return. A small museum inside the Synagogue provides an eye-opening account of their story. 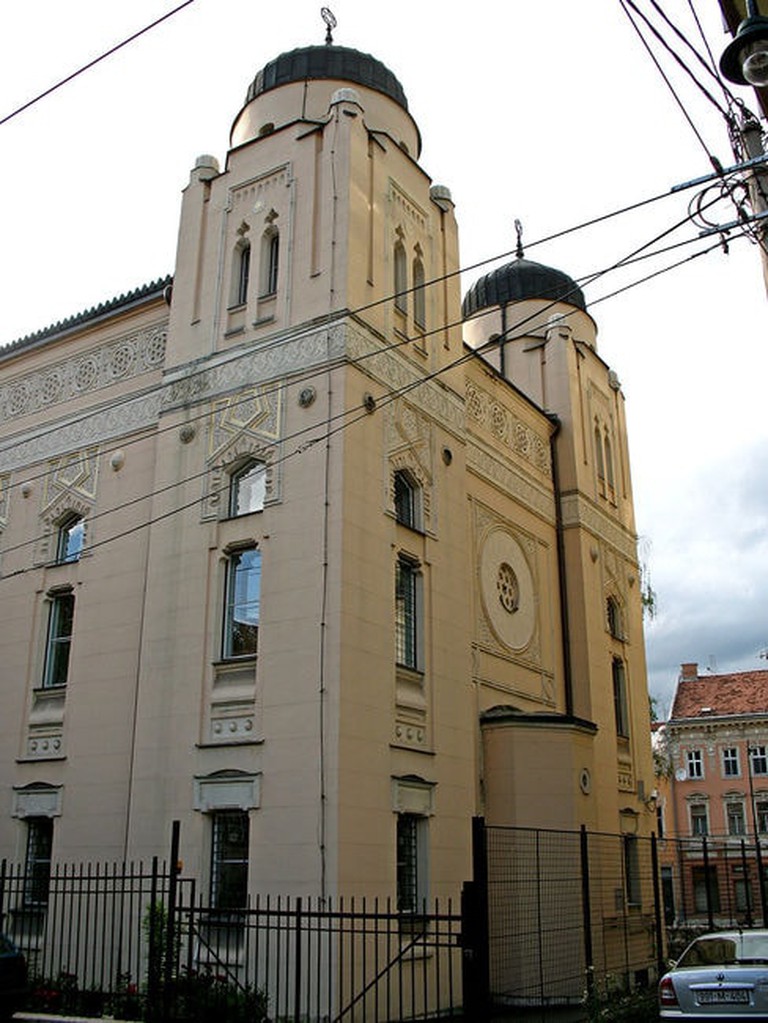 A Han is an inn for traders and travellers. Governor GaziHusrev-Beg commissioned the Morića Han in 1551. In the 16th century, Sarajevo was full of Hans for passing traders. This caravanserai could cater to up to 300 travellers and 70 horses. Today, only ruins survive of Sarajevo’s last remaining Han. Cafes and shops surround the remainstoday, and you can also get traditional Bosnian food from Barhana Restaurant, overlooking the former Han.

The world is full of strange clocks, from the Astronomical Clock in Prague to the Thai Mouth Organ Clock. But, have you ever heard of one from the 21st century that follows lunar time?

The Old Sarajevo Clock Tower, next to GaziHusrev-Beg Mosque, shows 12.00 and strikes midnight at sunset, confusing locals and tourists. Historically, this 17th-century clock announced to the local Muslim population when it was time forMaghrib, the Islamic prayer at sunset. A timekeeper needs to adjust the clock on a weekly basis to adhere to the changes in daylight hours. 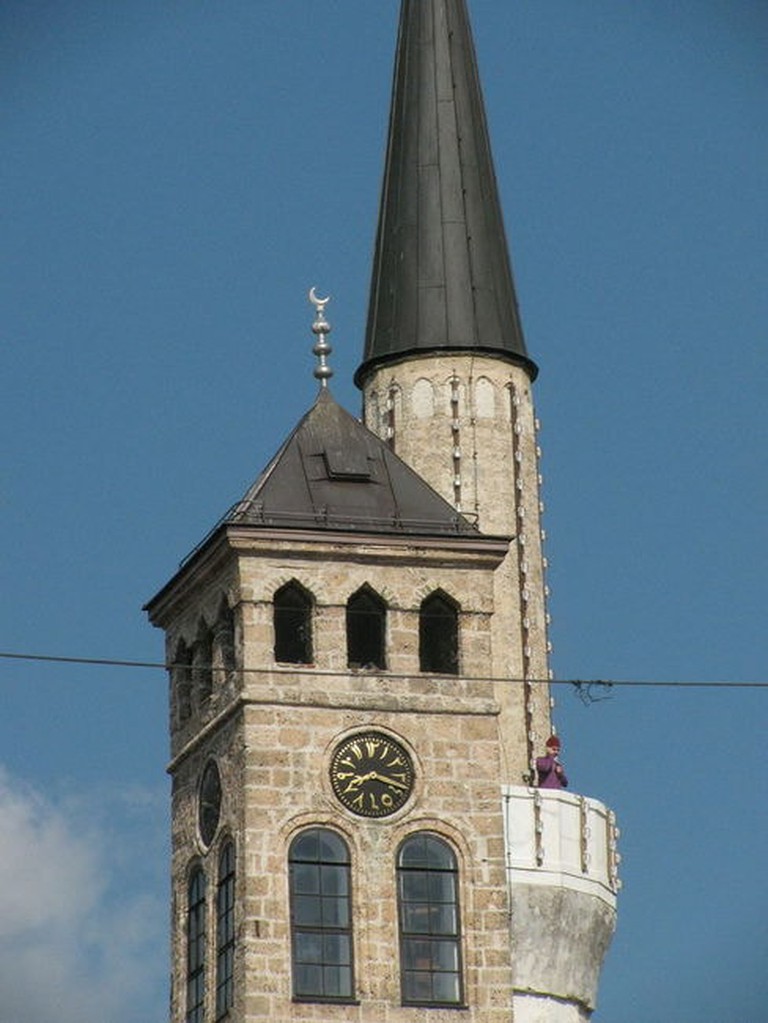 The Yellow Fortress in Vratnik district, named after the yellow rocks it’s made from,towers over eastern Sarajevo. In 1697, the unprotected city felt the wrath of the invading Austrians, who sacked the town. Gazi Ahmed Pasha RustempašićSkopljak, the then Ottoman Governor, built the Yellow Fortress to protect against future attacks. Today, locals and tourists climb up to view a spectacular sunset over the city.

Although Sniper’s Alley may not be very historical compared to other things on this list, it deserves a special mention. During the Siege of Sarajevo, Serb snipers hid in the Jewish Cemetery on the slopes of Trebević Mountain,firing at men, women, and children.

Delila, a local Bosniak, said that ‘Sarajevians pretended life went on as normal in an unnormal way otherwise people would go crazy’. This statement captures the essence of their resilience. But passing the mainMešaSelimović Boulevard and Zmaja odBosne Street was impossible without being exposed to the attackers. Residents either ran for their lives or crossed hiding behind the shields of UN armoured vehicles. Hundreds died by sniper, including 60 children.

You can stand in Sniper’s Alley today and get a feel of how dangerous this crossing was during the Siege. Or, climb up to the Jewish Cemetery on the hill to the south for the sniper’s perspective.