The Most Beautiful Religious Buildings in Bosnia & Herzegovina

Throughout its history, Bosnia & Herzegovina, situated on the ancient ‘border’ between East and West, has been a melting pot of numerous religions and religious orders. Around Bosnia are a number of significant religious sites, although unfortunately many were destroyed in the country’s civil war and have not been rebuilt. Here’s our list of the most beautiful churches, mosques and synagogues in Bosnia & Herzegovina. 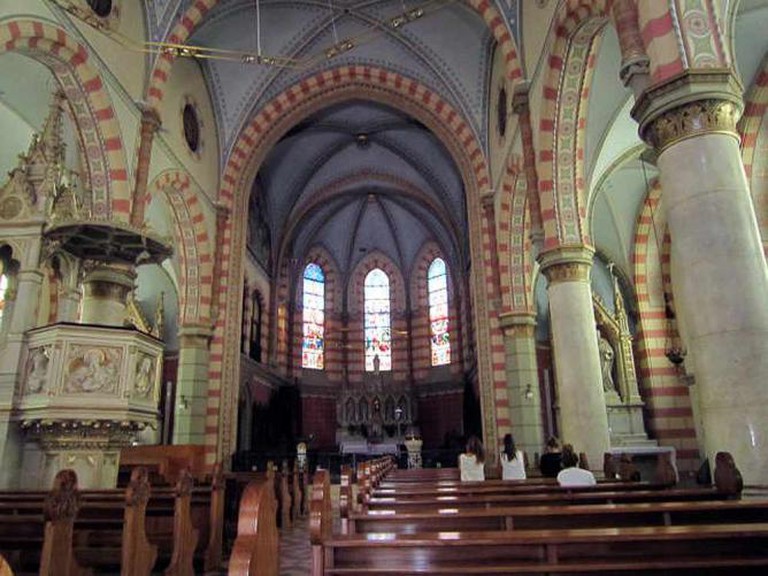 Sacred Heart Cathedral | Ⓒ Geoff Young/Flickr
One of Sarajevo’s most recognisable landmarks is its main cathedral, which is also the largest cathedral in the country. The construction of the cathedral was completed in 1889, and it was built in the neo-gothic style common to eastern Europe. The interior features delicate patterned arches and wood carvings, as well as typical Catholic paintings of saints and other important Catholic figures. The rood screen in particular features a numbers of paintings, surrounded by wood painted gold. The cathedral is located in the old town area of the city, making it a central feature of the main tourist district, and it is open to look around for free (although small donations are appreciated).
Open In Google Maps
2 Trg fra Grge Martića, Sarajevo, 71000, Bosnia And Herzegovina
+38733210281
Visit Website
Give us feedback 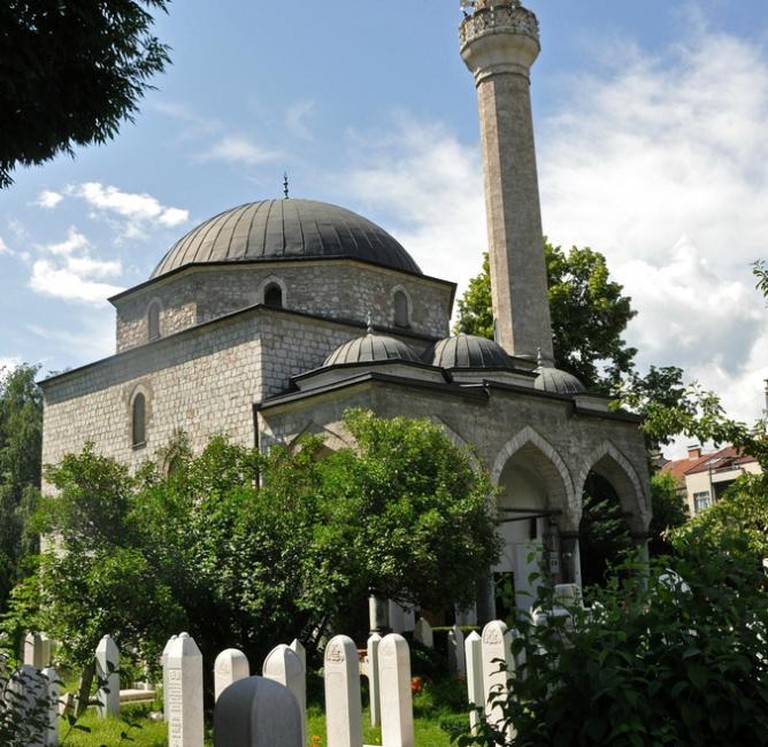 Ali Paša Mosque | Ⓒ Jennifer Boyer/Flickr
Constructed in the 1560s for an important local governor, this mosque is one of the oldest in Sarajevo. It was built by the Ottomans, and is in a style typical of Turkish mosques at the time. It is relatively small, but also features a pretty graveyard garden. It sustained significant damage during the civil war, especially to the dome, but has since been restored and declared a protected national monument due to its importance as a symbol of Bosnia’s Ottoman heritage.
Open In Google Maps
Hamze Hume, Sarajevo, 71000, Bosnia And Herzegovina
Visit Website
Give us feedback 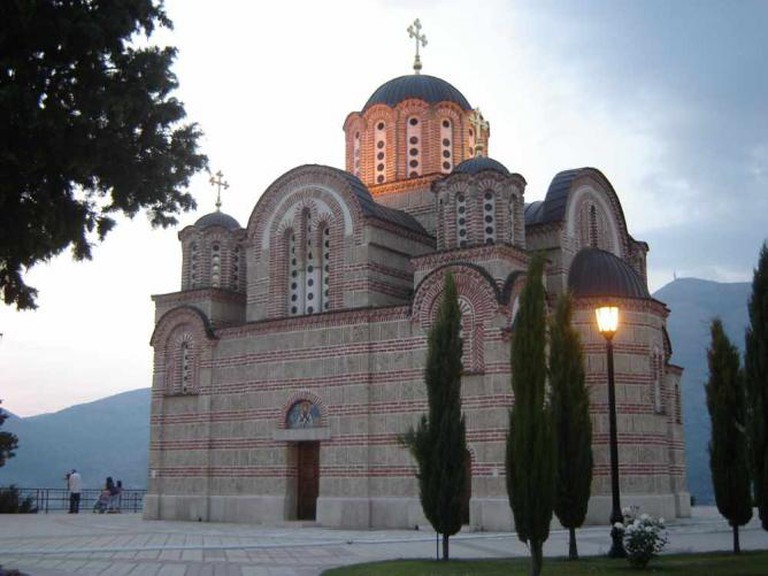 Hercegovačka Gračanica Church | Ⓒ Dejan/Flickr
At the southernmost end of Bosnia, in the area governed principally by Bosnian Serbs, is this beautiful Orthodox church. It is located at the top of a hill overlooking the town of Trebinje, and offers lovely views. It is surrounded by a neat courtyard, with tables where visitors can enjoy the view, and lush green trees and lawns. The church itself is built in a traditional eastern Orthodox style, including a number of domes as well as gold crosses on the roof. It was built in the late 19th century and has a rich interior, featuring extravagant gold chandeliers, ornate paintings, and carved columns. The church is open to visitors and is a lovely spot to enjoy a sunny afternoon looking out over the town below.
Open In Google Maps
Trebinje, 89101, Bosnia And Herzegovina
+38759261362
Visit Facebook page
Give us feedback 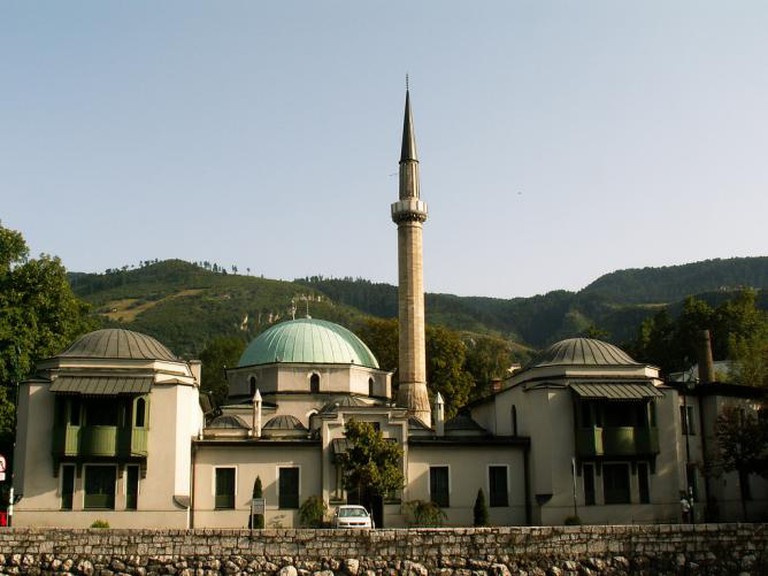 Emperor's Mosque | © jamie.silva/Flickr
The first mosque to be built after the Ottoman invasion in the mid-1400s was the Emperor’s Mosque in Sarajevo. It was constructed in 1457, which makes it the oldest mosque in the city, and is still in regular use today. Originally dedicated by its architect to the Ottoman conqueror of Constantinople, it is the largest single-dome mosque in the country. It features a small central courtyard surrounded by traditional covered walkways, while the interior is fairly large. Inside there are usual features of mosques, such as intricate rugs, walls decorations and domed ceilings. It is open to look around, but, since it is still in use, tourists cannot enter during services and must wear appropriate clothing.
Open In Google Maps
Obala Isa-bega Ishakovića, Sarajevo, 71000, Bosnia And Herzegovina
Visit Website
Give us feedback

Probably Banja Luka’s most iconic landmark is its Orthodox cathedral, the Cathedral of Christ the Saviour. It was constructed relatively recently, in 1929, but was modelled on older, more traditional Orthodox church architecture. On the exterior it features a tall tower and gold domed roof, while the inside is amazingly ornate and decorative. Details inside include a painted ceiling, a wealth of gold objects, and a carved wooden altar. It is found right in the heart of the city, and is a symbol of pride for the inhabitants since it has been a constant feature throughout years of conflict, beginning with persecution of Serbs during the Second World War.

Sarajevo’s main synagogue is Ashkenazi Synagogue, constructed in 1902. An older synagogue is located next door, which now houses the Jewish Museum, while the Ashkenazi Synagogue still functions today as a place of worship. Sarajevo has historically been a place that welcomes the Jewish community, although after the Second World War and the more recent civil war there is not a large Jewish community still living in the city. The synagogue itself is built in a neo-Moorish style, featuring an amazing painted ceiling inside as well as ornate stone carvings on the exterior. The synagogue and adjoining museum are good places to learn more about Sarajevo’s historic Jewish community.

This Catholic monastery of the Trappist Order of monks is located just outside the city of Banja Luka. It is the only Trappist monastery in southeastern Europe, and was once the largest monastery of its kind. Today, however, it is the smallest with only two monks. It was founded in 1869 with the arrival of Austro–Hungarian Christians into the region, and was a key symbol of the increasing presence of the Austro-Hungarian Empire in Bosnia. Until the beginning of Communist rule in Yugoslavia the monastery was one of the largest printing presses in the country; now, its main production is of Trappist cheese. The church within the abbey complex is the Church of the Assumption of the Blessed Virgin Mary, and the whole monastery is exemplary of Central European architecture from the 19th century. 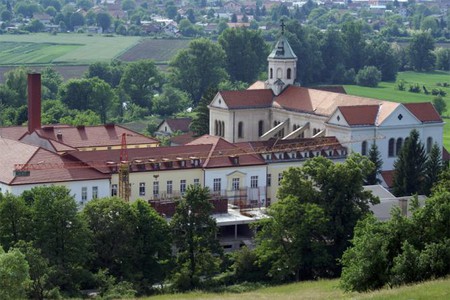 A prominent feature of Mostar’s skyline is this mosque, located near to the famous Stari Most bridge. Built in 1617, it is exemplary of the Ottoman architecture and design that is so prominent in the city, and is open to visitors. A climb up the minaret offers outstanding views of the Stari Most and the surrounding landscape, or, for those fearful of heights, there is also a shady terrace that also provides great views. The interior of the mosque is low-key but nonetheless beautiful, with colourful walls decorations and stained glass windows.

Church of the Holy Archangels Michael and Gabriel, Sarajevo 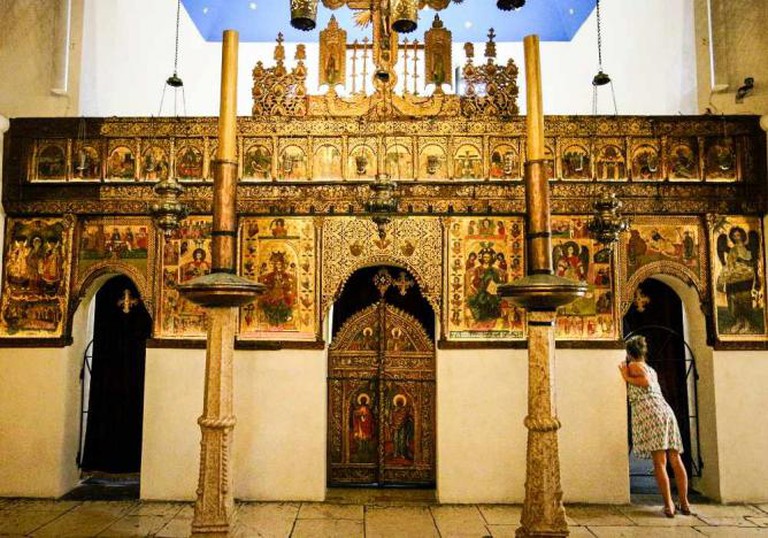 Inside Church of the Holy Archangels | Ⓒ Terekhova/Flickr
One of Sarajevo’s oldest churches, still in its near-original condition, is this Orthodox church dating from the early 16th century. It is less extravagant than many Orthodox churches, which gives it a unique charm. It features the usual Orthodox church tower, but apart from that it is almost unrecognisable as an Orthodox church; it has grey stone walls, a tiled roof, and a humble entrance. Inside, the décor is slightly more luxurious but is still clearly much more historic than many other Orthodox churches in the country. The ceiling is painted simply, and there is minimal gold detailing. Around the church is a lovely courtyard, which is made shady thanks to climbing plants and hanging flowers. The church is open to visitors, and is conveniently located in the old town quarter.
Open In Google Maps
59 Mula Mustafe Bašeskije, Sarajevo, 71000, Bosnia And Herzegovina
+38733571065
Give us feedback

Mosque
Facebook
Email
Twitter
Pinterest
Copy link
Share
Map View
This mosque near the city of Tuzla is thought to have been built around 1701. It is not immediately recognisable as a mosque, since it features a pointed roof and is primarily constructed with adobe white-washed walls. Its simplicity is what makes it beautiful; it is set in a simple green garden and has an appearance not unlike that of a countryside dwelling or cottage. The inside is simple, with a high ceiling and minimal wall decorations, which gives it a quaint charm. Its wooden minaret makes it an architecturally rare construction; it is symbolic of rural Bosnia’s simple and peaceful way of life.
Open In Google Maps
1 Jalska, Tuzla, 75101, Bosnia And Herzegovina
+387603494125
Visit Website
Give us feedback
Give us feedback