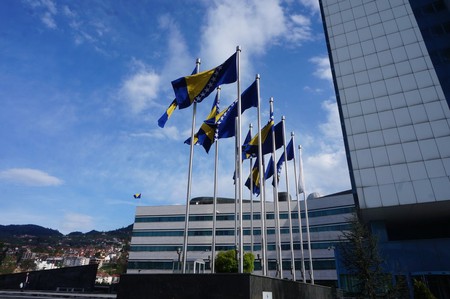 Sarajevo has a strange monument sandwiched between Tito’s Café and the National Museum. Non-locals feel bewildered when they see it, perhaps putting it down to another peculiarity of Bosnia. But those who know the background often smile or laugh when they walk past. Here’s Sarajevo’s ICAR Canned Beef Monument story so you can snigger too.

‘If there is another siege, I would rather die than eat ICAR’, were the words one Sarajevian opined on the monument.

Ask other Siege of Sarajevo (1992–1995) survivors and most say something similar. ICAR was canned food dropped into the besieged city. But before we explain, let’s take a quick look at the backstory. 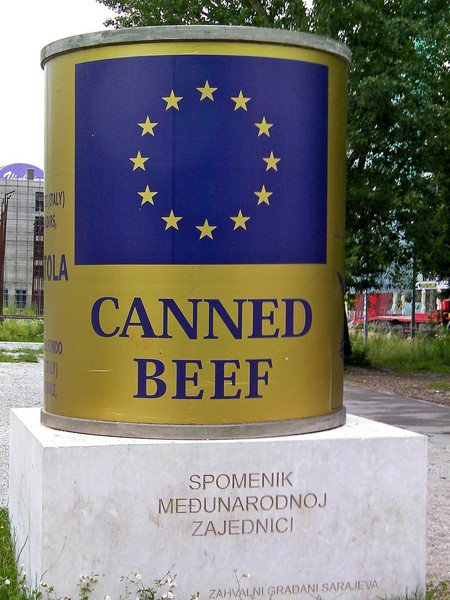 The international community put a weapons embargo on Serbia and Bosnia during the Bosnian War. Serbia had a robust and well-trained army with weapons and supplies. Bosnia didn’t have an army or many weapons. The lack of support meant they couldn’t defend themselves, which led to the later ethnic cleansing and genocide against Bosniaks (Muslims). Sarajevo had to get help from Colombian drug cartels to smuggle in firearms and ammunition.

Supplies dwindled after the first year. Food all but ran out, the limited medicine was traded on the black market and people burned furniture to keep warm during winter in Sarajevo. The situation was dire.

In July 1993, the longest airlift in history began, lasting until January 1996. More than 160,000 tonnes of food, medicine and blankets in over 12,000 flights supplied the capital.

However, many Bosniaks in Sarajevo weren’t happy and felt the international community didn’t care that much. The food they desperately needed was either 20-years-out-of-date Vietnam War leftovers, pork-based or the infamous ICAR Beef.

Locals said it was inedible. Stories claim stray dogs didn’t eat it. But that was the only thing they had.

In April 2007, the ICAR Canned Beef Monument appeared. Standing about one metre (three feet) tall, the statue depicts a giant can of beef. An inscription below sarcastically thanks the international community for their help and aid.

For many Sarajevians who lived through the Siege, the monument is ironic and puts a smile on their faces. Others (mostly non-Bosniaks) say the Sarajevians are ungrateful. After all, the world didn’t have to help.

But, one thing’s for sure: Sarajevians suffered and didn’t get the help they needed. Some residents want a monument for the Colombian drug cartels who helped them more than the rest of the world!