The Best Places to Go Backpacking in Bosnia 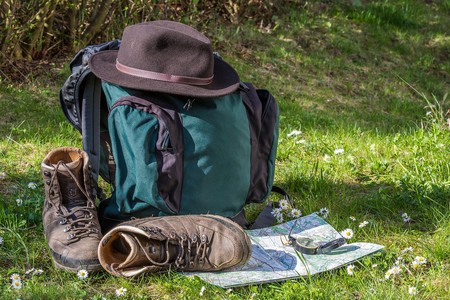 Backpackers often visit Bosnia as part of a broader trip around the Balkans. Some pass along Croatia’s Adriatic and take a day trip from Dubrovnik to Mostar. Others visit from Serbia and travel from Belgrade to Sarajevo. There are many reasons Bosnia is an ideal spot for backpackers, including the country’s cultural diversity, natural beauty, layers of history and the feeling of being in a less explored place. If you’re looking for the next adventure, don your backpack, grab a guidebook and head over to these hot Bosnian destinations.

Sarajevo, Bosnia’s capital, combines a 15th-century Ottoman centre with elegant Austro-Hungarian facades lining the Miljacka River. A modern city centre, along with drab socialist-era apartment blocks juxtapose against the historical core and craggy mountains that encapsulate the city. Traditional food, such as cevapi (a Bosnian kebab), is cheap and ubiquitous. And the Sarajevo accommodation is both affordable and comfortable.

Fans of history will love the capital. First, World War I started because of Franz Ferdinand’s assassination near Latin Bridge. The horrors we’re familiar with from the Bosnian War, and more specifically, the 44-month Siege of Sarajevo also took place here. Join the Free Walking Tour to learn more.

Backpackers also enjoy the week-long Sarajevo Film Festival, one of the largest in Europe, taking place every August. And if you’re staying here for a few days, take a day trip to the Bosnian Pyramids in nearby Visoko. 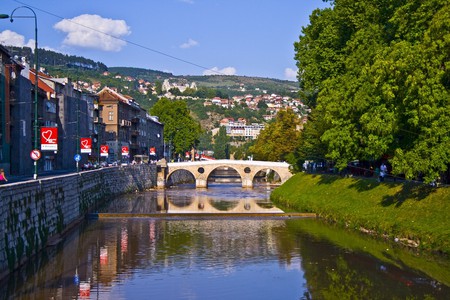 Tourists visit Mostar on a day trip from Croatia or when travelling from Sarajevo. Most arrive late morning and leave the same day. Mostar has Bosnia’s most famous attraction: Stari Most (“Old Bridge”). Stari Most, commissioned by Suleiman the Magnificent in the 16th-century, arches 29 metres (95 feet) over the River Neretva, 20 metres (66 feet) below.

Mostar’s Kujundziluk, the Ottoman centre, lies to the east of Stari Most. You’ll find souvenir shops, restaurants and Koski Mehmed Pasha Mosque on this side of the river. Head to the other side and countless restaurants serve fresh Bosnian beer, traditional food and coffee. The western part of Mostar feels very Croatian.

During the warmer months, divers walk around collecting donations to jump from the bridge into the river. Adventurous backpackers have the opportunity to dive themselves after completing a crash course for a little less than $25.

Budget-wise, expect similar costs to Sarajevo with around $20 a night for Mostar’s accommodation in either a hostel or budget hotel. The same is true for meals and drinks. The only significant cost is the Sarajevo to Mostar bus at 20KM ($12) per person and, quite likely, extra for luggage. The trains cost slightly less at 12KM ($7.20). Tours from Croatia are expensive. 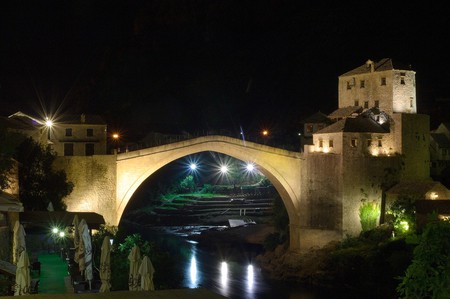 Night view of Stari Most | © Websi/Pixabay

Banja Luka gets the least amount of tourists and backpackers, which makes it more of an alluring destination for the adventurous. As Republika Srpska’s capital and cultural centre in northern Bosnia, Banja Luka is a modern city with a majority Serb, or Orthodox Christian, population.

The top must-see attractions in Banja Luka include beautiful buildings like Cathedral of Christ the Saviour and Ferhat Pasha Mosque as well as the pedestrianised Veselin Maslesa Street.

The city has a different vibe to both Sarajevo and Mostar because of demographics and its proximity to Croatia in the north. Expect leafy avenues, lots of cafés and a whole host of curious locals.

Compared to the other destinations in Bosnia, this city is slightly more expensive. There are fewer hostels and budget hotels in Banja Luka, and you should expect a room to be around $30. You can find an Airbnb for less. Getting to Banja Luka from Sarajevo is tricky and takes a long time on the bus. Trains don’t operate between Bosnia and the Republika Srpska. Head to Travnik instead for a few days as a stopover to break up the journey. You can easily get the bus from Banja Luka to Zagreb in Croatia too. 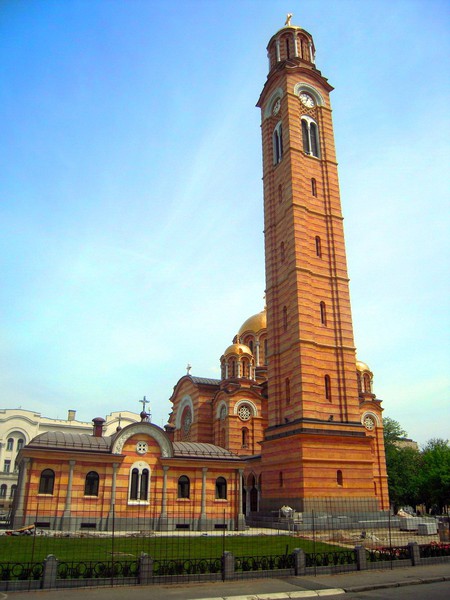 Bosnia has lots of beautiful towns shrouded in natural beauty and history. If you’re flexible on time and passing between Sarajevo and Mostar, consider spending a night or two in Konjic. Konjic has an Ottoman old town and the famous six-arched Stara Cuprija. Tito’s nuclear bunker, now a contemporary art gallery, is nearby.

And if you really want to get off the beaten path, explore Bosnia’s fourth region: Brcko District.