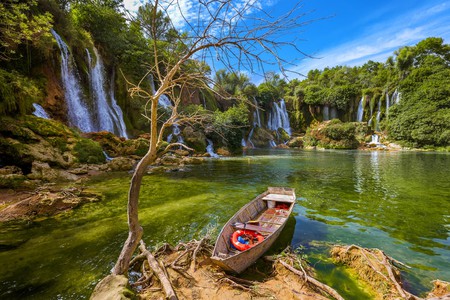 Visitors have the chance to experience historical Ottoman towns, former capitals, magnificent canyons and mountains on a day trip from Sarajevo. Independent travel works well for some; others are better with a tour guide to explain the context. So, if you have visited all of Sarajevo’s must-see attractions and enjoyed the best Bosnian traditional food, check out the following day trips.

Herzegovina’s capital, Mostar, attracts vast numbers of tourists to see the 16th-century Ottoman Stari Most, a bridge connecting both sides of the city over the River Neretva. You can find lots of things to do in Mostar from walking through the Old Bazaar, eating Bosnian food on a terrace overlooking the river to climbing the Franciscan Church’s 108 metre (354 feet) bell tower. Both sides of the River Neretva feel different with branching Ottoman alleys to the east and a Croatian-like neighbourhood on the west.

Visiting Mostar is a must on any trip to Bosnia. Either take the bus or train from Sarajevo to Mostar, which passes through some of Herzegovina’s best scenery with tall lush canyons divided by a blue-green meandering river. Or, join an organised tour from Sarajevo that provides transport and a guide. 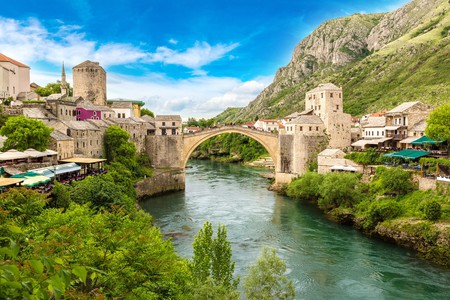 The Old Bridge in Mostar in a beautiful summer day, Bosnia and Herzegovina | © S-F/Shutterstock

Travnik was the Ottoman capital earning the nickname ‘the most Oriental City in Bosnia’. Located in the Lasva Valley 86 kilometres (53 miles) from Sarajevo, the town has Ottoman architecture, the Travnik castle (15th-century), mosques and clock towers. If you’re a fan of history, visit Travnik on a day trip from Sarajevo. Buses leave every hour from the bus station taking approximately one and a half hours. Or join Sarajevo Funky Tours, which visits Travnik, Jajce, the Bosnian Pyramids and Pliva Lakes. Tours cost €65 ($77) and start at 8:00 am.

Sarajevo Funky Tours has a day trip to Srebrenica, the location of the worst atrocity in the Bosnian War. In July 1995, under the orders of General Ratko Mladic, ‘the Butcher of Bosnia’, troops machine-gunned more than 8000 Bosniak (Bosnian Muslim) men and boys over the age of 12 in the so-called UN safe zone. The small northeast Bosnian town changed forever, displacing up to 30,000 civilians and receiving the title as the worst European massacre since the Holocaust.

The daily Srebrenica Tour starts at 8:00 am from Sarajevo and returns in the early evening costing €60 ($70) per person. Expect a sad, but necessary, experience to appreciate the atrocities of the late 20th-century Bosnian Genocide. 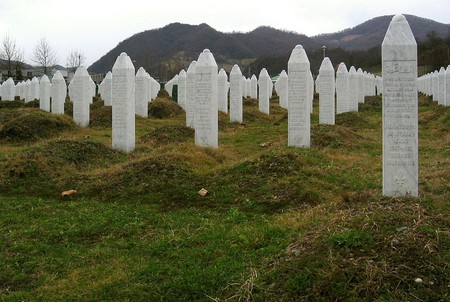 Did you know you could potentially visit the world’s largest pyramid that dwarfs the Pyramid of Giza on a day trip from Sarajevo? The Bosnian Pyramids are perhaps a collection of human-made structures in Visoko with healing properties. But the scientific community believes it’s a complete hoax to drive tourism to Sarajevo and Bosnia. Convincing evidence exists but isn’t globally accepted.

You can visit the Pyramids using public transport or as a Sarajevo excursion with a guide. Hourly buses leave the city’s central bus station to Visoko, and the trip takes approximately an hour. Bosnian Pyramid offers day tours around the archaeological complex. A guided visit involves in-depth descriptions of archaeological evidence from trained professionals.

If you’re travelling around the Balkans and plan to visit either Croatia or Montenegro, the Total Herzegovina by Funky Tours is the best day trip from Sarajevo. Not only will you get to see all of Herzegovina’s top attractions, but you’ll also end up in either Croatia’s Dubrovnik or Montenegro’s Kotor. The tour combines sightseeing with reaching your next destination.

The trip starts from Sarajevo to Mostar via Konjic to see the famous six-arched Stara Cuprija Bridge and Jablanicko Lake. Keep your camera on standby as you pass through the picturesque Neretva River Canyon with craggy green mountains and the meandering jade river. In Mostar, a two-hour walking tour takes you to the Old Bazaar and Stari Most before heading to Blagaj Town’s Buna River Spring, the Dervish House (Blagaj Tekke), the Ottoman era Pocitelj and finally, Kravica Waterfalls.

Tourists who are travelling to either Croatia or Montenegro should consider this day trip from Sarajevo for €109 ($128) to experience everything Herzegovina has to offer. Those with a limited amount of time find the Total Herzegovina Tour excellent value for money and the best way to see everything the region has to offer. 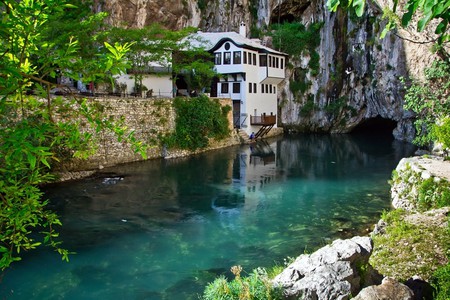 Dervish house on Buna spring with a small waterfall and a cave nearby in a sunny summer day in Blagaj, Bosnia and Herzegovina | © Alex Marakhovets/Shutterstock
Give us feedback