The 10 Most Beautiful Buildings in Sarajevo, Bosnia

Historical Landmark
The Neo-Moorish Façade | © lasserbua/WikiCommons
City Hall, or Vijećnica, is one of the best Austro-Hungarian buildings in Sarajevo. Czech architect Karel Parik designed the large symmetrical orange building with a Neo-Moorish façade and completed it in 1896. Franz Ferdinand and his wife Sophie were coming from here the day of their assassination. The National Library opened in 1949 with 1.5 million books, of which 155,000 were invaluable documents and manuscripts. A deliberate attack destroyed City Hall and 90% of the books inside. Reconstruction ended in 2014. Go inside and see the lavish interior and ornate glass ceiling for 5KM ($3US). Weddings and concerts sometimes take place inside too. Opening hours are from 10 a.m. to 5 p.m. (and until 8 p.m. in the summer).
More Info
Open In Google Maps
Obala Kulina bana, Sarajevo, Federacija Bosne i Hercegovine, 71000, Bosnia And Herzegovina
+38733292800
View menu
Visit website
Visit Facebook page
Send an Email
Give us feedback

Mosque
In 1561, one year after Governor Ali Pasha’s death, the mosque opened. Built in a classical Ottoman style with one large and three smaller domes, this recently became a national monument of Bosnia. Ali Pasha Mosque was a major target during the Siege of Sarajevo causing heavy damage. Visitors of all religions are welcome during non-prayer times.
More Info
Open In Google Maps
Hamze Hume, Sarajevo, Federacija Bosne i Hercegovine, 71000, Bosnia And Herzegovina
View menu
Visit website
Visit Facebook page
Send an Email
Give us feedback

Mosque
The Minaret of the Most Iconic Mosque in Sarajevo | © Bjoertvedt/WikiCommons
Did you know the first mosque in the world to use electricity in 1898 is also both the largest and most important Ottoman structure in Sarajevo? The Gazi Husrev-Beg Mosque, completed in 1530, sits in the Bascarsija. Named after the former Governor who is said to be Father of Sarajevo, this mosque is the most famous building in Sarajevo. Non-Muslims are welcome to see the intricate carvings, art and mesmerising Islamic calligraphy decorating the interior (outside of prayer time). The courtyard is also the final resting place of several influential Bosniaks from poets to politicians.
More Info
Open In Google Maps
8 Sarači, Sarajevo, 71000, Bosnia And Herzegovina
+38733532144
View menu
Visit website
Visit Facebook page
Send an Email
Give us feedback

Church of the Holy Archangels Michael and Gabriel

Church
The 16th–century Orthodox Church is one of the oldest monuments in Sarajevo. An even older church is below the foundations dating back to pre-Islamic Bosnia. Several groups sacked and destroyed the Old Orthodox Church throughout its history. Resilient locals rebuilt the church every time.
More Info
Open In Google Maps
59 Mula Mustafe Bašeskije, Sarajevo, Federacija Bosne i Hercegovine, 71000, Bosnia And Herzegovina
+38733571065
View menu
Visit website
Visit Facebook page
Send an Email
Give us feedback

The glass exterior glimmers under the sun as the tower rises and twists 176 metres (564 feet) into the sky. At this height, Avaz Twist Tower is the tallest building to date in the Balkans, which opened in 2008.

Offices fill the lower floors, and a rooftop café on the 35th floor has affordable coffee and beer. Elevators bring visitors to the top in a matter of seconds. The 36th-floor open-air observatory is where you can learn about the construction and enjoy views for just 1KM ($0.60US).

Cathedral Church of the Nativity of the Theotokos

Cathedral, Church
The once controversial bell tower | © Bjoertvedt/WikiCommons
Serb merchants funded this controversial Orthodox Church in the second half of the 19th century. The yellow and orange baroque building (completed in 1868) has one main dome and four corner ones. Paintings, patterned decorations and a marble floor wow visitors on the interior.
More Info
Open In Google Maps
1 Zelenih beretki, Sarajevo, 71000, Bosnia And Herzegovina
+38733269261
View menu
Visit website
Visit Facebook page
Send an Email
Give us feedback

Mosque
On the corner of Vladislava Skarica and Ferhadija Streets is the recently reconstructed Ferhadija Mosque. Built in the 16th century under the then Governor, Bosnian Sanjak-bey, the mosque has a large dome and a tall minaret. Ferhadija is another example of the classic style of Ottoman architecture prominent during their Golden Age. The complex once had an adjoining Islamic school (mekteb) and public kitchen (imaret). Now lost to time, only a small graveyard remains. Paintings cover the interior, with the earliest dating back to the 16th century. Ferhadija Mosque became a National Monument of Bosnia and Herzegovina in 2004.
More Info
Open In Google Maps
Ferhadija, Sarajevo, 71000, Bosnia And Herzegovina
View menu
Visit website
Visit Facebook page
Send an Email
Give us feedback

The Sarajevo Cathedral is the seat of the Archbishop of Vrhbosna making it the centre of Catholicism in Bosnia and Herzegovina. Gazing up at the large symmetrical neo-gothic façade, you may recognise similarities with Notre Dame in Paris. 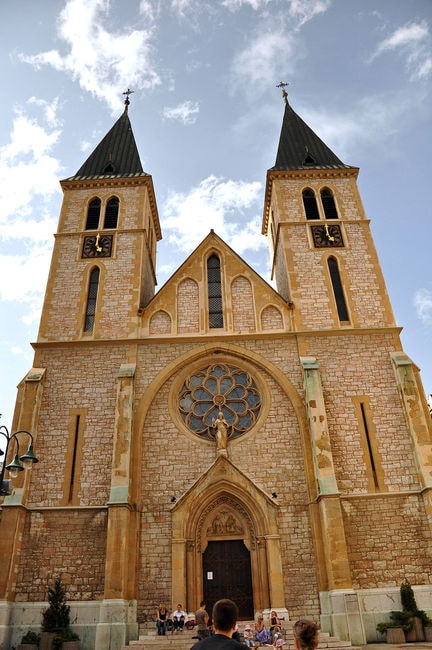 Shopping Mall
The 16th-century Bezistan in Old Sarajevo | © Jennifer Boyer/Flickr
The Bezistan, or covered Bazaar, sits in Bascarsija next to the Madrasa and Gazi Husrev Bey’s mosque. Commissioned in the mid-16th century by the Governor of the same name, Bezistan provided shelter to traders selling textiles. Today, vendors sell everything from clothes to souvenirs.
More Info
Open In Google Maps
Gazi Husrev-begova, Sarajevo, 71000, Bosnia And Herzegovina
+38733532144
View menu
Visit website
Visit Facebook page
Send an Email
Give us feedback
Mon - Fri:
8:00 am - 8:00 pm
Sat:
9:00 am - 8:00 pm
Sun:
10:00 am - 7:00 pm

The National Museum of Sarajevo

Museum
The Ottomans came up with the idea of having a National Museum in the mid-19th century, but in their typical style, never got around to building it. When the Austro-Hungarians arrived, they commissioned this Italian Renaissance Revivalist-style building to house the museum. National Museum is a prime example of Austrian architecture in Sarajevo contrasting against the earlier Ottoman stone and domes and the later homogenous concrete of Yugoslavia. Sarajevo combines Islamic architecture from the Ottoman’s Golden Age with lavish Austrian facades. Postwar modernism is replacing the monotonous socialist styles making a distinctive blend today.
More Info
Open In Google Maps
3 Zmaja od Bosne, Sarajevo, 71000, Bosnia And Herzegovina
+38733668027
View menu
Visit website
Visit Facebook page
Send an Email
Give us feedback
Tue - Fri:
10:00 am - 7:00 pm
Sat - Sun:
10:00 am - 2:00 pm
Give us feedback