Sarajevo's Street Art: The Unlikely Legacy of the Bosnian War 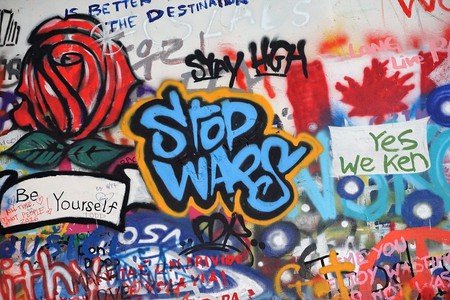 Post-war Sarajevo has reminders of the sad past many of the current residents experienced, such as bullet-riddled apartment blocks, and memorials on almost every street. But there’s another way the city is trying to brighten up its past, which is in the form of street art.

Large colourful murals and images decorate some of the derelict and crumbling walls of Sarajevo’s suburbs, acting to commemorate victims, show defiance, or distract people from the unrepaired damage. Art comes in many forms, and there’s a fine line between one person’s view of art and vandalism. Unintelligible scribbles and tags – like most cities suffering from high unemployment and little in the way of opportunities – cover the same walls as the murals.

Some Sarajevans express themselves in words, paintings, and others through street art. So, when you’re walking through the city, keep your eyes open for the art described below and take the time to understand what they mean, rather than just snapping a selfie.

Visitors to Sarajevo will notice two things. First, the large red splatters on the floor and second, if you open your eyes, the roses present on some of the street art. The splatters are called Sarajevo Roses and are damaged mortar shells stained red with dye to mark the location of where at least one person died. You’ll see a lot of these on the pavements as you walk around the city. Roses fused into other street art also act a memorials to remember those who lost their lives during the conflict.

If you’ve visited other cities around Europe, you may have noticed a large yellow cat with a big grin on the walls. The cat is known as Mr Chat and is one of the most popular images in street art. But, those in Sarajevo are slightly different and tend to carry a deeper meaning than just a quirky image. You’ll often see Mr Chat around Sarajevo surrounded by red roses. Approximately 12 are in the city decorating the otherwise grey and decaying walls.

Stop the War. Save the Children.

As the name suggests, this message is another symbol of peace in the once war-torn capital. During the Siege of Sarajevo, more than 1,500 children lost their lives. Parents often had to rely on their children to help bring essential supplies such as food and water back to their house. A young Sarajevian remembers that ‘we were smaller than our parents and it was easier to hide. Our parents had no choice but to ask us to fetch water from the fountains’. The sentiment acts as a reminder of the unnecessary loss of young lives in an unnecessary war.

Srebrenica carries a sad connotation among Bosniaks (Bosnian Muslims) after the July 1995 massacre in this eastern Bosnian village. Serb forces murdered more than 8,000 men and boys, burying them in mass graves. Two decades later and the scars still run deep for many, especially since few were brought to justice for their crimes. As you walk around Sarajevo, you’ll see the name Srebrenica on the walls. Sarajevo’s Gallery 11/07/95 chronicles the events through photographs, documents and archives. Street art serves as a reminder never to forget what happened. 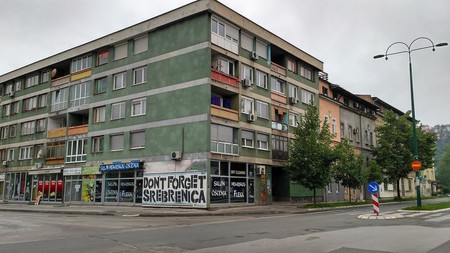 The Everything Alright mural at Sarajevo’s bobsleigh track is an attempt to brighten up a dark and dismal place with a role in the city’s recent past. Serb snipers hid in the bends and twists of the track just eight years after the glory of hosting the 1984 Winter Olympics. During the Siege of Sarajevo (1992-1995), snipers shot innocent people in the city below. The colourful mural with the positive words ‘Everything Alright’ underneath serves to distract people from the damage and dilapidation of this once proud structure.

‘I love this city. I defend this city,’ is the caption beside a black and white image of a citizen aiming a gun in one of Sarajevo’s alleys. The Bosnian Soldier, or an armed citizen, shows the attitude and approach of young Bosniaks living in the besieged city. ‘You attack us, we attack back’, is the clear message behind the art.