At the heart of the western Balkans, Sarajevo features dining that is the ultimate cultural experience where one can taste Ottoman, Austro-Hungarian and Balkan flavors. We’ve put together a list of the top 10 places to try. 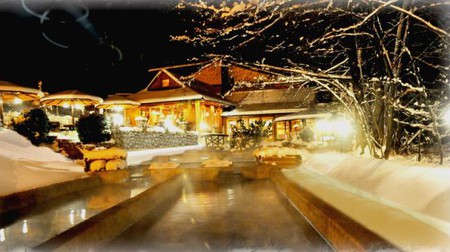 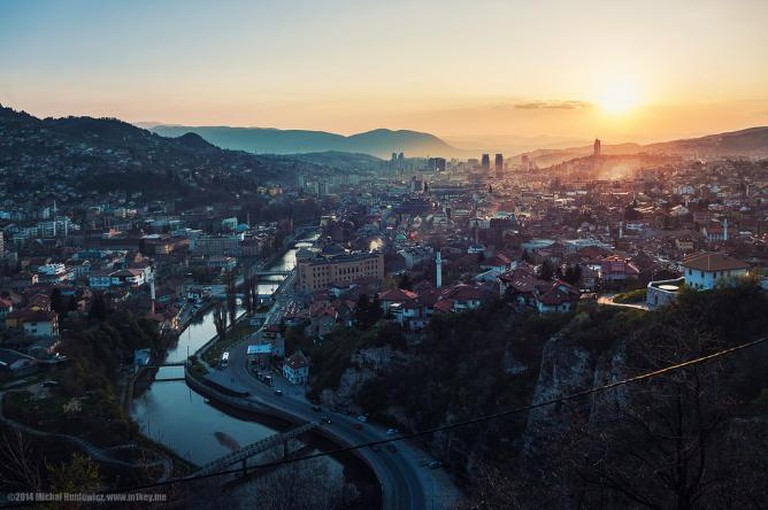 Sarajevo Sunset | © Michał Huniewicz/Flickr
Toplik is located a bit further afield from the city but is well worth the trip. The family-owned restaurant opened in 2001 as part of a project to construct a self-sufficient countryside oasis. It has a fish farm and garden to the benefit of the restaurant. All of Toplik’s dishes are therefore fresh, organic and seasonal. This is the ideal spot to enjoy a meal overlooking the nearby brook in the summer, or next to a roaring fire in the winter. The idea behind Toplik is not only to make great food, but also to promote a return to natural ingredients and encourage domestic production and a healthier lifestyle.
Open In Google Maps
250 Vuka Karažića, Republika Srpska, Bosnia And Herzegovina
+38757321455
Visit Website
Give us feedback 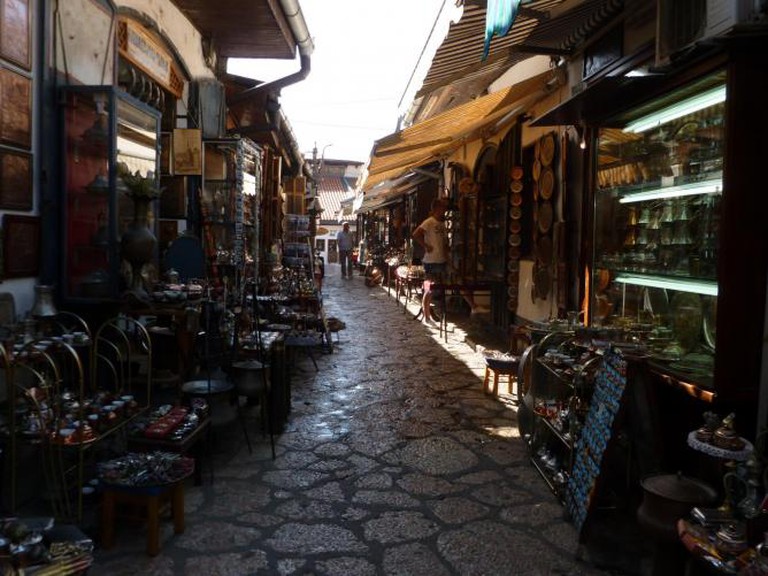 Old Town of Sarajevo | © Monika/Flickr
Located slightly uphill outside of the touristy centre, Avlija is the place to be if you want to experience the city like a Sarajevan. The interior can be described as cozy, charming and funky, with potted plants hanging from the ceiling and an eclectic array of treasures hanging on the walls. The menu lists traditional dishes such as klepe, polenta and Bosnian grill alongside international dishes. Avlija is the type of restaurant where families, friends and co-workers go to enjoy good food and talk late into the night. For great food on a budget with a relaxed atmosphere, Avlija is not to be missed.
Open In Google Maps
2 Avde Sumbula, Sarajevo, Federacija Bosne i Hercegovine, 71000, Bosnia And Herzegovina
+38733444483
Visit Website
Give us feedback 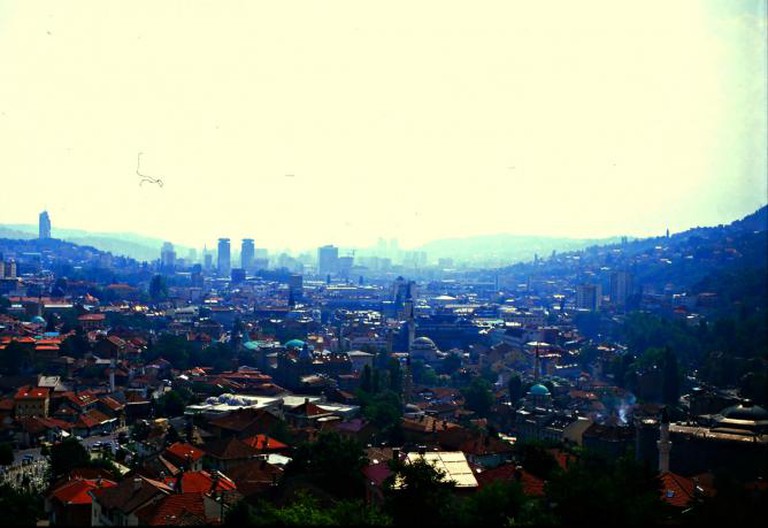 View over Sarajevo Old Town | Ⓒ Rueben Thompson/Flickr
Though located in the city centre, Dveri’s interior transports diners to the countryside. The menu includes many Balkan favorites like homemade bread, ajvar and Dalmatian prosciutto as starters. Main courses highlight Dveri’s different take on traditional plates. Traditional dishes like polenta, goulash and stuffed veal are served alongside non-traditional options including squid, risotto and pork dishes. Diners can top off the meal with one of Dveri’s wide range of fruit rakia or a traditional Bosnian coffee. With an intimate feel and affordable prices, Dveri is an ideal place to enjoy traditional Balkan cuisine at its best.
Open In Google Maps
12 Prote Bakovića, Sarajevo, Federacija Bosne i Hercegovine, 71000, Bosnia And Herzegovina
+38733537020
Visit Website
Give us feedback 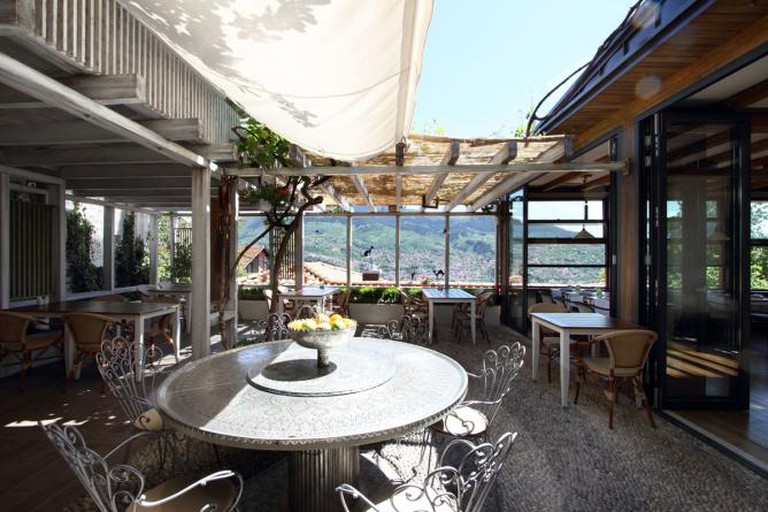 On the patio of Kibe Mahala Restaurant | © Courtesy of Kibe Mahala
Sarajevo may be a meat-lover’s paradise, but vegetarians should head over to Karuzo, which is located at the non-numbered end of Dženetića Čikma Street. The only meat-free and smoke-free place in the city, Karuzo is leading a health revolution in Sarajevo. Though the restaurant’s owner and chef Saša Obučin jokes that meat dishes such as the burek and ćevapčići have attained the status of national symbols, this small restaurant has become so popular that it’s nearly impossible to get a seat without making a reservation in advance. Its interior is decorated with a nautical theme, with pieces coming from the Croatian seaside town of Cavtat. This is fitting, since the menu serves Mediterranean-style seafood dishes along with vegetarian and vegan options. Named after the first opera tenor to record his voice, Enrico Caruso, Mr. Obučina sees his restaurant as a leader in encouraging Bosnians to lead a healthier lifestyle.
Open In Google Maps
Sarajevo, Federacija Bosne i Hercegovine, 71000, Bosnia And Herzegovina
+38733444647
Visit Website
Visit Facebook page
Give us feedback

Located on a hillside overlooking the city, the Kibe Mahala offers one of the most stunning views of Sarajevo. The view is not the restaurant’s only attraction however; it also serves delicious Bosnian dishes, including the house specialty: spit-roast lamb. To accompany these traditional dishes Kibe Mahala also offers an assortment of wines from throughout the region. Adding to the ambience of the restaurant, two guitarists play traditional Bosnian music and even take requests. As the restaurant is very popular it is best to make reservations in advance. It is also advisable to take a taxi to the restaurant, as it is quite far uphill.

The team at Mala Kuhinja offers one of the most exceptional dining experiences in Sarajevo. Inspired by Asian cuisine, the chef prepares dishes that fuse Asian and Balkan culinary traditions to produce a combination of flavors you’d be hard pressed to find anywhere else in the world. There is no menu here. Instead, the waiter chats with customers and suggests dishes that are tailored to your culinary tastes. Diners are seated at tables overlooking the open kitchen, meaning that you can also watch your meal being prepared.

Built in 1864, the Sarajevo brewery first began producing beer under Ottoman rule. Later, beer became a favored beverage for the Austro-Hungarian monarchy and short-lived Kingdom of Serbs, Croats and Slovenes. During the siege of Sarajevo the brewery provided the only source of clean water to residents. The establishment has stood the test of time; the brewery continues to produce the most popular beer in Sarajevo and has won more awards for its quality than any other beer in the world. In 2004 the brewery opened its restaurant Pivnica HS, so that visitors could sample the different beers made at the Sarajevo Brewery, while enjoying a selection of hearty Bosnian dishes. 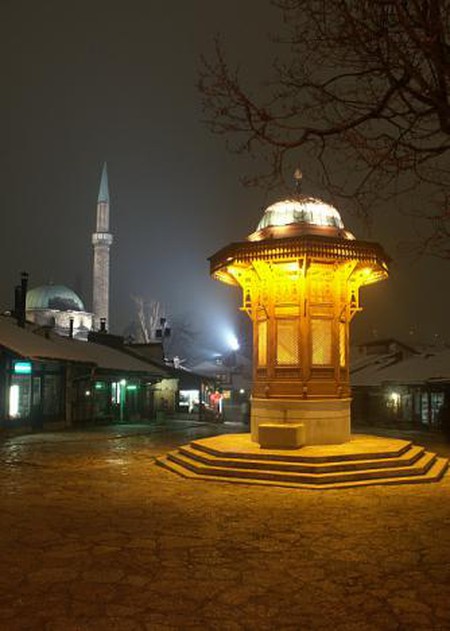 Restaurant, French, Fusion, $$$
Facebook
Email
Twitter
Pinterest
Copy link
Share
Map View
Restoran 4 Sobe Gospođe Safije, which translates to ‘The Four Rooms of Mrs. Safije’, is located in a beautifully restored house that was built in 1910 by an Austrian count who fell in love with a beautiful woman from Sarajevo named Safije. The house now encompasses an elegant restaurant, charming garden, sophisticated wine bar and a cozy lounge. The story of the forbidden affair by the original owners inspired the current owners to create an intimate atmosphere that preserves the building’s romantic history. The restaurant’s chefs have created two menus, one for Safije that offers Bosnian dishes with a modern twist, and one for Johan that includes a blend of culinary influences ranging from India to Mexico.
Open In Google Maps
61 Čekaluša, Sarajevo, Federacija Bosne i Hercegovine, 71000, Bosnia And Herzegovina
+38733202745
Visit Website
Give us feedback 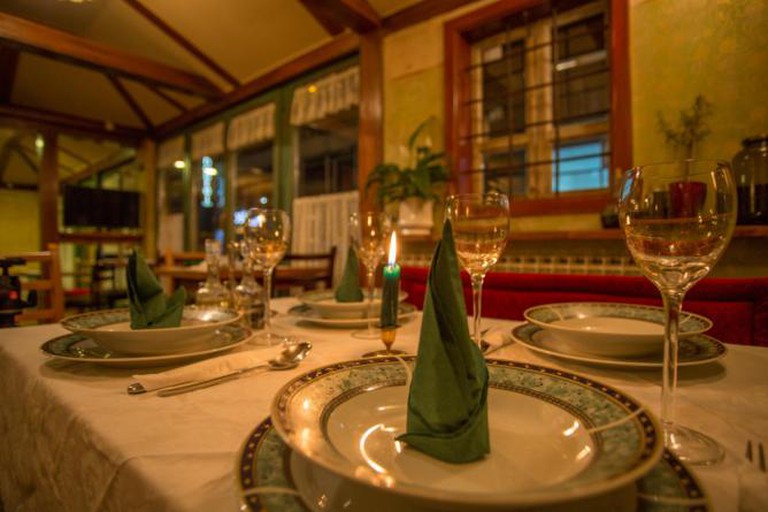 Courtesy of Zara iz Duvara.
With more than 100 types to choose from, Restoran Vinoteka is a great place to try local wines. In the past, the Balkan wine region has gained little attention compared to the more popular wine-producing countries in Europe. Recently though, Balkan wine has grown in popularity with more wine aficionados visiting the region to discover new flavors. Vinoteka is one restaurant that is leading the trend by offering a wide range of local selections. Its wine list includes reds and whites from Bosnia, Croatia and Slovenia, as well as selections from outside the Balkan region. The internationally themed menu offers Mediterranean cuisine, wok-prepared dishes, risotto and a large selection of fish.
Open In Google Maps
12 Skenderija, Sarajevo, Federacija Bosne i Hercegovine, 71000, Bosnia And Herzegovina
+38733214996
Visit Website
Give us feedback

Restaurant, European, Soup, Healthy, $$$
Facebook
Email
Twitter
Pinterest
Copy link
Share
Map View
Zara iz Duvara has already attracted a loyal following. The restaurant benefits from its location just around the corner from Sarajevo’s Markale, where fresh vegetables and fruit are sold daily. The restaurant specializes in traditional Bosnian dishes, but adds its own distinct flavor by reviving the use of some of the more neglected ingredients such as barley, mountain herbs, preserves and homemade chutney. The menu changes regularly but favorite dishes include Bosnian stew, klepo, dolma and ćevap.
Open In Google Maps
bb Dženetića čikma, Sarajevo, Federation of Bosnia and Herzegovina, 71000, Bosnia And Herzegovina
+38762147300
Visit Website
Visit Facebook page
Give us feedback
Give us feedback