For the first time in ten years, the artist Mladen Miljanović represents Bosnia and Herzegovina at the 2013 55th International Art Exhibition in Venice – La Biennale di Venezia. The national pavilion for this Balkan country was entitled The Garden of Delights. It is a socially engaged work of art and seeks to interrogate multiple historical perspectives specific to Eastern European society. 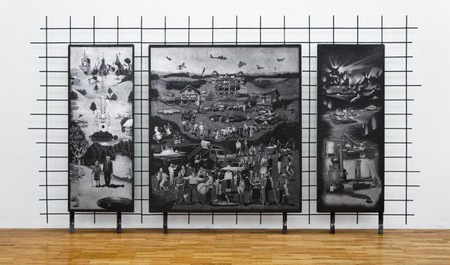 The overall theme of the Venice Biennale has been selected by curator Massimiliano Gioni and is entitled ‘Il Palazzo Enciclopedico’ or ‘The Encyclopedic Palace’. In line with this theme, Mladen Miljanović’s work is a search for understanding the artist’s world, presenting works by contemporary artists, but also apparent historical works and references in an attempt to create another reality. The conceptual framework for Miljanović’s project is reminiscent of Hieronymus Bosch’s famous Renaissance triptych The Garden of Earthly Delights (c. 1500). For Gioni, visions of the classical period help to arouse the artists ‘aspirations’, and in modern times are ‘obsessions’ of the same kind. Both Gioni’s and Miljanović’s prospective interests aim to give tangible forms to both time frames, and transcend the frameworks of both past and present. 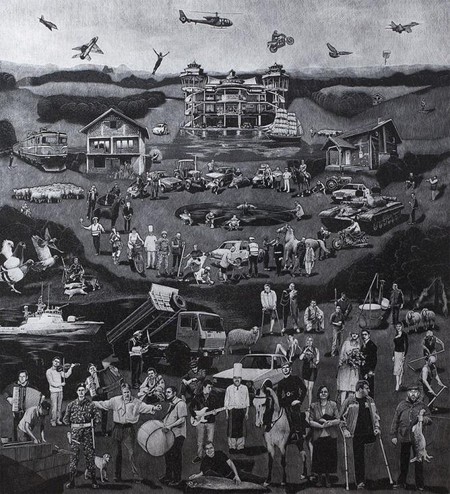 The project ensemble consists of three interconnected smaller pieces – a marble triptych, a video clip and an installation. Using the famous triptych by the Dutch painter as the basis for the work, Miljanović utilised this reference of the past to create a dialogue in the present. Miljanović was informed by his previous job as a tombstone engraver, when he would often have requests from patrons to engrave their gravestones with images of the things which had brought them the most joy in life. Inspired by this ritual of remembrance, Miljanović’s installation contains more than one hundred tombstone motifs found and collected in the Central Balkans. This technique enabled him to re-enact a dialogue about Bosnian culture and how it is expressed within their burial rituals. While realising his concept, Miljanović made a video to accompany the exhibit entitled ‘Sweet Harmony of the Absurd’ in which members of the Banja Luka Philharmonic simultaneously play their favourite pieces. As Miljanović describes, ‘the graveyard is an area storing an encyclopaedia of images of individual lives joined into a garden of collective eternity’.

Watch this video ‘Sweet Harmony of the Absurd’ in which members of the Banja Luka Philharmonic simultaneously play their favourite pieces: 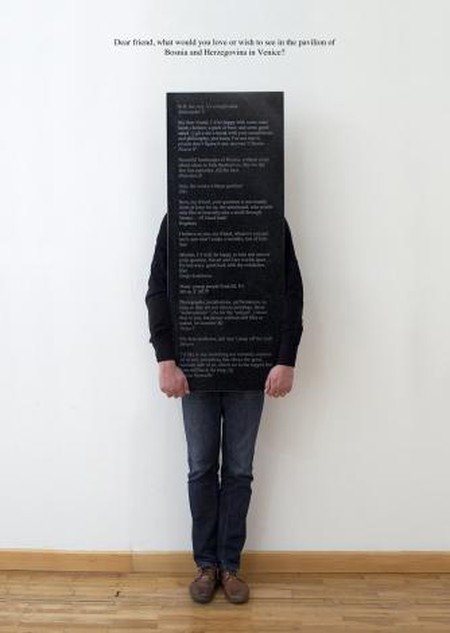 Mladen Miljanović was born in 1981 in Zenica, Bosnia and Herzegovina. He graduated from the Academy of Art in Banja Luka, Bosnia and Herzegovina. After secondary school, he attended the Reserve Officer School where he earned the rank of sergeant. After completion of the military term he enrolled at the Academy of Arts (Department of Painting, BA, MA) in Banja Luka. Numerous international participations followed, such as the Busan Biennale in South Korea in 2008, a show at Palazzo Forti in Verona, Italy, in 2009 and the Museum Moderner Kunst Stiftung Ludwig Wien (MUMOK) in Wien, 2010. In 2012 he was in Venice at A plus A Slovene Exhibition Centre with the solo show Good Night – State of Body. Most recently in February 2013, he exhibited at the MC Gallery in New York.

Images courtesy of the artist.