How to Spend 48 Hours in Sarajevo, Bosnia 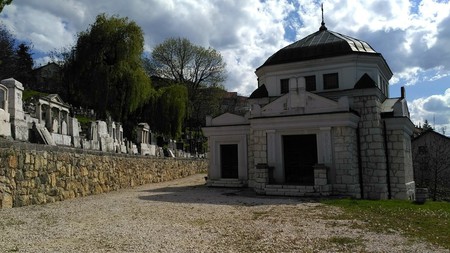 Not everyone has the luxury of spending a full week exploring the humble yet opulent, progressive but sad capital of Bosnia and Herzegovina. Sarajevo has it all, from Ottoman bazaars to grand Austrian architecture, and museums to satisfy history buffs and those looking to understand more about the tragedy in the 1990s. Here’s our guide to spending 48 hours in Sarajevo.

Arriving in Sarajevo brings many new sights, sounds, and smells. Ottoman-style hamlets sit in neat terraces around the hills, with lavish Austro-Hungarian buildings and modern skyscrapers around the centre. The sounds of the muezzin’s Maghrib prayer echoes around the old town as the sundips below the horizon from centuries old mosques. The smell of cevapi, a sort of kebab-sausage made from minced meat, wafts through the cobblestones streets.

When you arrive in Sarajevo and experience the above, you will fall in love with the city, like many others before. Most hotels are within walking distance of the Old Bazaar, or Bascarsija, which is the first point of call.

Wander around the 15th-century cobblestone streets, through the winding and branching alleys. Check out the GaziHusrev-Beg Mosqueand Sephardic Synagogue StariHram. Take photographs in Pigeon Square and drink from the Sebiljwater fountain before heading through Coppersmith Street in the Old Ottoman trading quarter.

Restaurants line the small streets of the Old Bazaar, selling traditional Bosnian dishes as well as international cuisine. Before you hit the pillow, reserve a spot on the War Scars Free Walking Tour for the next day at 3.30pm. 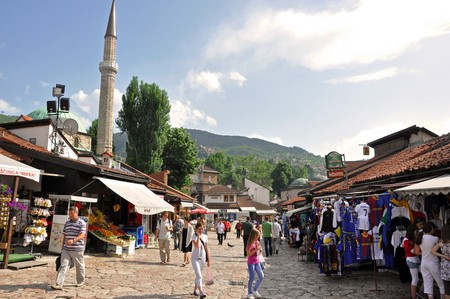 Start the morning with a Bosnian coffee, similar to Turkish coffee, in the tallest building in the Balkans. The Avaz Twist Tower in MarijinDvor, Central Sarajevo, reaches 172 metres (564 feet) in height, and has a rooftop cafe on the 35th floor. Get your caffeine fix while looking out at the orange roofs on the hills and modern complexes below. To the south is the cemetery where Serb snipers hid and shot at men, women, and children.

After coffee, head up to the outdoor observation deck above (admission 1KM or $0.60). 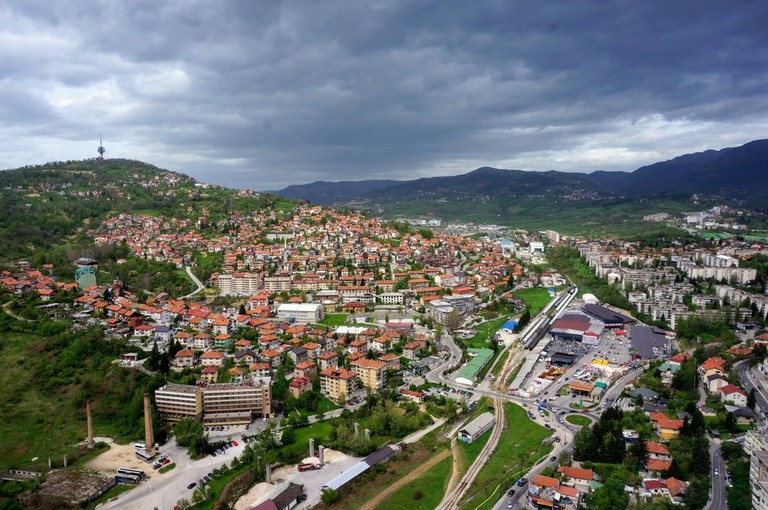 Walk a few blocks south past the United States Embassy to the National Museum of Bosnia and Herzegovina. The pastel-coloured two-storied Renaissance building holds collections dating back to the Middle Ages. Learn about life in Sarajevo under the Ottomans while walking through the ethnographic sections.

The museum‘s prized artefact is the Sarajevo Haggadah, a document brought by the Sephardic Jews as they fled Barcelona in the 14th century.

Grab a burek (a pastry filled with meat, cheese, or spinach) for lunch and head east to the Sarajevo Cathedral on Fra AnđelaZvizdovića. Continue east towards to Old Baazar, passing through Hastahana, Mali and Veliki Parks. Take note of the Sarajevo Roses on the pavement, which are damage from shelling marked with red dye. People died on these spots.

You’ll also pass the orange Vijecnica, or City Hall, designed by Czech architect Karel Pařík in the late 19th century. City Hall was the target of shells during the Siege of Sarajevo. Most of the building was destroyed, including irreplaceable documents and archives. 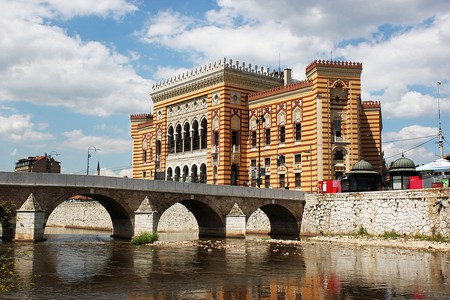 The Latin Bridge, the Ottoman-style deck bridge believed to date from the mid-15th century, is the most famous spot in Sarajevo. On June 28th 1914, Serb Nationalist Gavrilo Princip assassinated Archduke Franz Ferdinand and his wife Sophie as they passed by this bridge. A plaque on the corner of ZelenihBeretki marks the spot where Princip fired the shot.

At 3.30pm, join the War Scars Free Walking Tour. A guide takes you around the important landmarks of the Siege of Sarajevo. You’ll hear personal anecdotes and see the damage that remains today. It’s an emotional but necessary tour for understanding the event.

Take a taxi to the former 18th-century city walls at Yellow Bastion in Jekovac for the best sunset in Sarajevo. During Ramadan, Muslims come here to wait for the cannon to signal that fasting is over.

For dinner, the House of Spite sitting next to the River Miljacka serves traditional Bosnian food, and has an interesting story to tell. 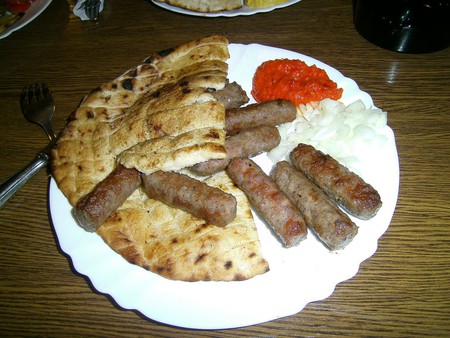 Use your final hours to learn what happened during the Siege and Bosnian War. Head to the Bascarsija for breakfast and coffee before visiting a museum to appreciate the events of Srebrenica.

The Museum of Crimes Against Humanity and Genocide 1992-1995 (admission 5KM or $3) covers the harrowing events of the Srebrenica Genocide with photographs, documentary footage, and archival documents.

Visit the Tunnel Museum. During the siege, Bosniaks dug a tunnel from thebesieged part of the city underneath the airport to unoccupied territory. The tunnel was their lifeline to the outside world, and now it’s a museum with a small section open to the public. Learn about the Siege and see how the locals coped. Take a taxi or join an organised tour, as getting here is tricky. 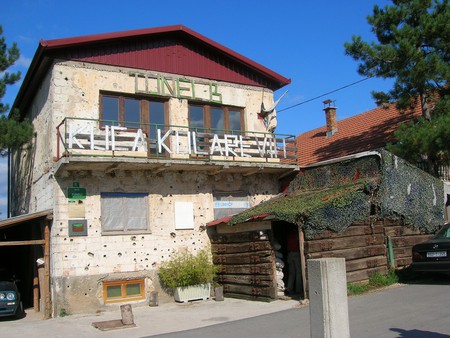 After returning from the Tunnel Museum, head to the Sarajevo Brewery on Franjevačka 15, in the eastern part of the city, for a glass of fresh Sarajevsko Beer. Or, go for a coffee in a café dedicated to Tito near Wilsons Avenue in the central parts of Sarajevo. Take the time to reflect upon your experience in Sarajevo and the horrors of what happened here, but the beauty that remains.