How to Spend 48 Hours in Brcko, Bosnia 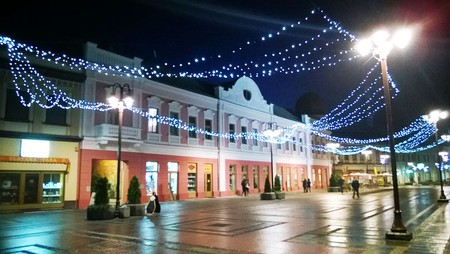 Are you looking for a stopover between Sarajevo and Belgrade, or want to explore the part of Bosnia that most tourists don’t? If you answered yes, Brcko–Bosnia’s fourth region–is an excellent spot with an interesting political story. There isn’t so much to do in Brcko, and 48 hours is enough time to experience the city and learn its story.

An early arrival in Brcko

More likely than not, you’ll arrive at Brcko Bus Station. Located about one and a half kilometres (one mile) from the city centre and about two from the Riva Sava, you can either walk (20 minutes) or get a taxi. Some hotels in Brcko have a central location, but others are quite far away. If you decide to walk, head north through the Novo Brcko, or New Brcko, neighbourhood and through Velika Park.

An afternoon exploring the heart of the city

The first stop on any trip to Brcko is Trg Mladih, the main pedestrianised street. Austro-Hungarian architecture dominates, and you’ll find some of the best coffee shops in Brcko here too. Start in the south and stroll north while marvelling at the former merchant houses, the yellow and orange City Hall and Hotel Posavina. Fontana Mladosti, one of most famous places to see in Brcko, is near the square. The fountain’s sculpture depicts two children holding a large fish, which signifies the river’s historical and cultural importance.

As you reach the confluence of the Rivers Brka and Sava, turn right and visit Atik-Saska Dzamija, the city’s oldest mosque. Built at the start of the 17th-century, the religious building has been destroyed and rebuilt multiple times. Today it has a modern design with a terracotta tiled pyramid-shaped roof and a single minaret. Be sure to take a few photographs of one of the most unique attractions in Brcko.

Eat at the best restaurant in Brcko

One of the most recommended things to do in Brcko is to eat in the city’s best restaurant. Bakarni Lonac doubles as a hotel, with world-class chefs cooking everything from fresh seafood, grilled meats and various dishes from around the Balkans. Expect prices to be high, but the food will be unlike any other in the region. You’ll need to take a taxi from downtown Brcko.

Not everyone can afford the luxury of eating at the best restaurant in Brcko, especially those travelling in Bosnia on a budget. As an alternative, you’ll find lots of restaurants in central Brcko serving more affordable meals, including Bosnian kebabs (cevapi), barbequed meat and other traditional dishes.

Day one involved a lot of sightseeing. Two will be more relaxed. When you wake up, head back to Trg Mladih for your morning caffeine in one of the manycafes in Brcko. For breakfast, grab a Bosnian Burek (pastry filled with either meat, cheese or spinach) from one of the many bakeries along the street.

Caffe Corso has a beautiful interior design and affordable Bosnian coffee. Locals congregate in the welcoming environment in the morning. Alternatively, there’s Caffe Boa, on the same block, which has strange interior design that’s a cross between an English pub and a Central European coffee shop.

Amateur photographers love visiting Brcko for the views of the River Sava, Austro-Hungarian façades and religious buildings, such as the Atik-Saska Dzamija Mosque and Sacred Heart Church. You probably photographed the first yesterday, which means you should visit Brcko’s only Catholic church today.

After breakfast, continue heading south along the pedestrian street onto Bosne Srebrene for about a kilometre. The white church dates back to 1933, and will be in front of you. Feel free to explore nearby Velika Park too.

Later, head to the River Sava. Croatia and the European Union begin on the opposite side. Ficibajer, a large park along the river’s banks on the northern side of the city, provides a shady place to relax with views. Consider taking a taxi from the church if you don’t want to walk 20 minutes.

After an active two days in Brcko, finish your trip with a meal overlooking the river at Sheher La Petite. Later, grab a drink at the Old Dubliner Irish Pub, rated one of the best bars in Brcko. Tourists and locals love the pub for the selection of beer, live music and the welcoming environment, making it a must-visit.