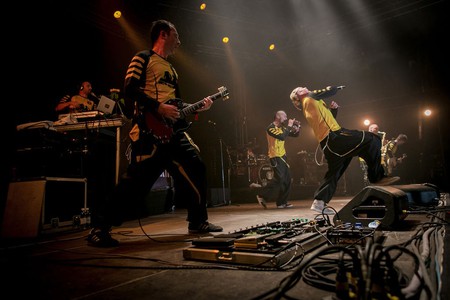 Yugoslavia had an active music scene, from folk to rock bands, before the state dissolved in the early 1990s. Today, each former-Yugoslavian country has their own style and genre, with Bosnia producing rock, pop and hip–hop. Here are some of the best Bosnian singers to check out for a flavour of the country’s music scene.

Dino Merlin is one of Bosnia’s most famous musicians. He represented his country in the 2011 Eurovision Song Contest. The King of Bosnian Pop started his career as a muezzin, the person who sings the Islamic call to prayer. Dino’s music fits into the pop and rock genres, and he performs as a solo artist and the lead singer in 1980s pop band, Merlin. Rane, released in 2015 and featured on his Hotel Nacional Album, is one of his most famous tracks.

Rap and hip-hop are favouritesof the Bosnian youth, and Bijeljina-born Frenkie is the most prominent name. Frenkie, active since 1997, went into exile during the Bosnian War. He spent 15 years living in Germany, which inevitably influenced the brazen nature of his lyrics.

Frenkie’s tracks often have political undertones about injustice and the complicated situation in contemporary Bosnia. The most controversial incident in the rapper’s career came after releasing a track about police corruption. He was ordered to pay a hefty fine.

But not everything is political. Career highlights include having a track featured in the 2008 Incredible Hulk, and the well-loved Izgubljenisnovi, released in 2005.

Bosnia’s most versatile band combines various styles and genres into eclectic and satiricaltracks. DubiozaKolektiv uses elements from rock, reggae, brass and other genres, with either Bosnian or English lyrics.

Most of their satirical songs have an upbeat rhythm with a catchy component of folk music thrown in. Dubioza Kolektivhada fruitful career and performed at several international festivals around Europe, including Glastonbury in 2015. The band are worth checking out for their humorous and outrageous music videos, such as Hymn of a Generation.

Goran’s career began in 1969, and since then has had soundtracks featured in more than 20 films. Another highlight of Bosnia’s most internationally recognised musician is his duet with Iggy Pop.

Goran is a talented vocalist, guitarist and a bass expert. His lyrics aren’t political, and he tries to combine various styles to create a story. Time of the Gypsies, a soundtrack for the 1988 film of the same name, is one of Goran’s most notable works.

This Bosnian heavy metal band–whose name translates to ‘wild strawberries’–is a local rock icon that has performed at many festivals in the Balkans. Active since 1977, DivljeJagode’s career spans 40 years. They’ve released several singles and compilations. Lyrics tend to be in Bosnian, though some songs have English versions. Kap Po Kap is one of DivljeJagode’s best songs.

The Bosnian Serb from Sanski Most in Bosnia’s northwestcompeted and finished second in Serbia’s 2009 version of Star Academy. VukasinBrajic then represented Bosnia in theEurovision Song Contestin 2010 with Thunder and Lightning, performed in English. This bilingual musician produces pop, ballads, and is the rock bandLetuStuke’s frontman. Vukasin is currently one of the hottest Bosnian pop singers.

If you’re into heavy metal, you’ll like this Mostar-based band. As one of the earliest thrash metal bands in the region, Monolit gave inspiration to many contemporary bands. Despite having little recognition outside Yugoslavia, the story of Monolit is different to the regular rise to stardom.

After gaining popularity, they performed for the first time at Sarajevo’s Heavy Metal Festival in 1991.Destined for fame, their career was cut short by the outbreak of conflict, and the band went into exile.Founding member, Zlatko Mehic, died. After 15 years, Monolit reunited in 2008.

Kletva was released in honour of Zlatko. Their first album featuring a mixture of new and old songs, called Arcana Balkanica, was finally released in 2008.

An unlikely duo formed dZihan & Kamien in 1996, after a Bosnian from Sarajevo and an Austrian met in Vienna. The pair quickly became one of the famous bands in Bosnia. They create a strangeblend of jazz, withinfluences from Arabic, electronics and trip–hop styles. After a career lasting 14 years, and releasing their first full–length album (Freaks and Icons) in 2000, one of their last tracks, Deep Disco, is said to be their best.