Who Is Greg Van Avermaet? A Look At Belgium’s Gold Medalist 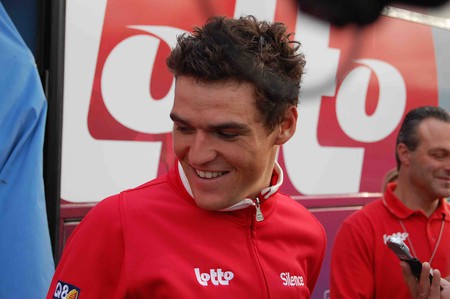 He surprised his country and the Rio crowd by taking home the gold medal in this year’s Rio road race, but who exactly is Greg Van Avermaet? A classics specialist who’s had to combat bad luck and multiple injuries in his career, the Belgian cyclist has finally ridden a streak of important victories to Olympic gold and bona fide winner status.

Despite a terrific season that included a win in the Tour de France and a semi-classic victory, Greg Van Avermaet was nowhere near a favorite to bag the gold that fateful day amidst the glittering beaches of the Copacabana. With a grueling track that had expert climbers such as Spaniard Alejandro Valverde and Colombian Sergio Henao wringing their hands, the peloton faced 237 kilometers of steep climbs and treacherous descents. It was smart tactics in the end that led ‘Golden Greg’ to victory as the East-Fleming made all the right decisions.

Joining a group of six that broke away about 70 kilometers from the finish, Van Avermaet had a podium place in mind along with Thomas, Fugelsang, Majka, Henao, and Nibali. Although he couldn’t prevent the escape of the latter three 20 kilometers before the end, the cards were shuffled once more when Vincenzo Nibali – winner of this year’s Giro – got a little too enthusiastic in a challenging descent and crashed, taking an unfortunate Henao down with him. Majka seemed to be heading for the gold on his lonesome, yet the Dane Fugelsang and Van Avermaet had smelled blood. After a superhuman effort, the two caught up to a wilting Majka, with Van Avermaet proving the strongest in the final sprint.

This kind of tactical insight and maturity seems to be a more recent quality of Golden Greg, which might explain the Belgian’s most stellar season to date. A majestic breakaway in the fifth stage of this year’s Tour de France saw Van Avermaet bagging the fifth race and wearing the yellow jersey for the first time in his career, and holding on to it for three days. He prefaced this by winning Omloop Het Nieuwsblad, the semi-classic opening the Belgian spring season, beating out world champion Peter Sagan in the Tirreno-Adriatico, and winning the overall Tour of Belgium. After Rio, he took his excellent shape and golden bike to Montréal in September to triumph in the Grand Prix.

While 2016 is the year of plenty for Van Avermaet, his winning streak has started somewhat later than expected. It was clear from the early stages of his career that the former goalkeeper was brimming with promise on two wheels. A third place finish in the classic E3 Harelbeke and eighth place in the Tour of Belgium during his second professional season prompted the phrase ‘the new Tom Boonen’ to be passed around. Yet as time went on, it was hard for Van Avermaet to turn those positions screaming with potential into actual wins. While he built up a reputation as an admired ‘Flandrien’ – an expert in the Flemish spring classics who knows how to cope with winds and bad weather – the seasons from 2009 to 2013 remain rather dry in the prize department. All sorts of bad luck, injuries, and tactical choices by his team BMC to have Philippe Gilbert as captain in a lot of races conspired to keep Van Avermaet on the back burner.

I had a wonderful time in @letourdefrance Next on the program San Sebastián and the Olympics in Rio! #ride_bmc #roadtorio pic @hardyccphotos

The turning point arrives in late 2014 when Van Avermaet reels in all the big Belgian cycling awards after a season that again proves he could be a force to be reckoned with. BDM puts its faith in the Flandrien to head the Belgian classics, and from here, there’s no going back. Race by race, a more self-assured and forceful Van Avermaet appears on the forefront of the 2015 cycling scene, besting sporting gods like Peter Sagan, Zdeněk Štybar, and Filippo Pozzato in a power struggle in the Tirreno-Adriatico’s third phase and winning the Tour of Belgium. By 2016, Golden Greg is finally calling the shots, living up to those early promises.