Where To Eat The Best Oysters In Belgium

At De Oesterput in Blankenberge the salty treats wind up on your plate in record time thanks to the restaurant's own oyster-growing pit | © De Oesterput
Whether you love oysters or consider them a slippery, overpriced mess, they remain a North Sea delicacy your taste buds must try at least once. From established seafood restaurants to outdoor kiosks and trendy markets, these Belgian oyster hotspots serve this gourmet shellfish at their best.

Restaurant, Seafood, Belgian, $$$
De Oesterput is a family business that has been harvesting oysters in North Sea water for well over a century | © De Oesterput
De Oesterput – literally ‘the oyster pit’ – boasts over 130 years of oyster excellence. Pieter ‘Pito’ Devriendt, patriarch of this family-owned establishment, was involved in the first oyster pit to ever open in Blankenberge near the end of the 19th century. Soon the farmer and seller added a restaurant where his customers could not only sample oysters, but homegrown mussels and lobsters as well. Today De Oesterput, also mentioned in our ‘best mussels’ category, is widely recognized as the seafood specialist to beat on the Belgian coast. Seafood lovers come from afar to don their lobster bibs and munch away at royal-sized platters of crustaceans and shellfish on ice.
More Info
Open In Google Maps
16 Wenduinse Steenweg, Blankenberge, Vlaanderen, 8370, Belgium
+3250411035
View menu
Visit website
Visit Facebook page
Send an Email
Give us feedback

One of the best places for oysters in Belgium besides the seaside is Ghent. An artists’ hub well on its way to becoming Belgium’s premier foodie city as well, oysters are everywhere and the annual oyster market organized since 2008 by Brasserie Pakhuis no doubt has something to do with their soaring popularity. Their airy and beautifully renovated industrial warehouse plays host to rows of booths where you can sample a wide variety of oysters with a glass of champagne on the side. Ringing in the start of oyster season, ‘Oyster Sunday’ is the ideal stop for lunch with friends or to select the tastiest of the shellfish to try your hand preparing them at home. The next edition is set for Sunday, October 23rd from 11am to 3pm. 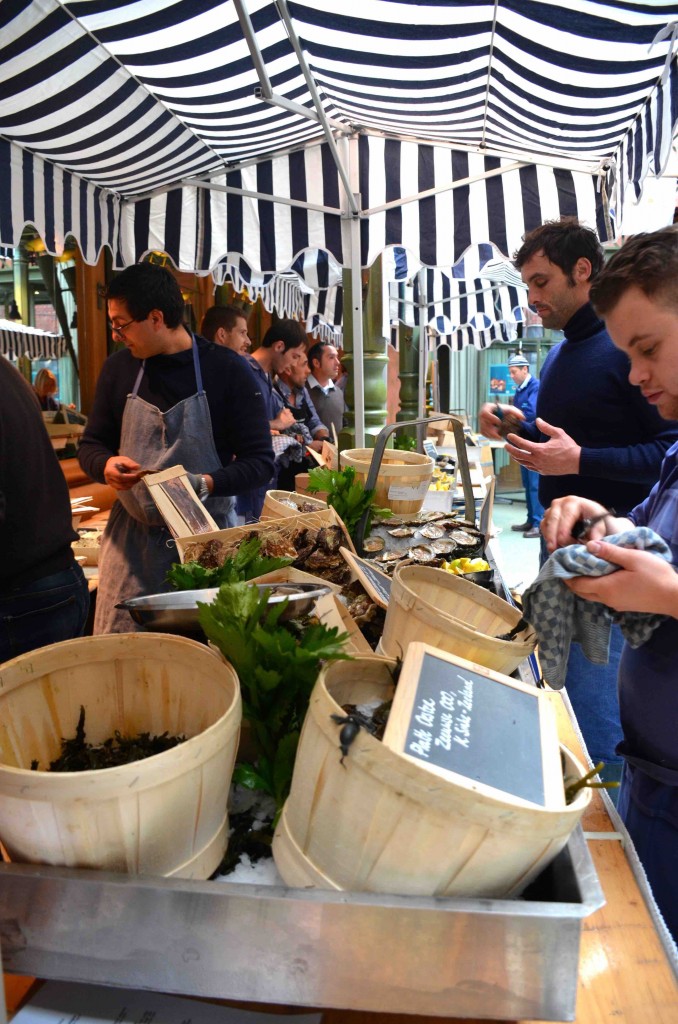 Bar, Pub Grub, Belgian
Another sign of Ghent’s love for a good oyster on occasion is De Blauwe Kiosk. Open all year round on Sundays and holidays, the former newspaper stand is seeped in nostalgic charm with its glass inscription journaux indicating its pre-World War II purpose. Very few things beat slurping oysters and sipping bubbly on the stately Kouter square as the fragrances of the weekly flower market float in the air.
More Info
Open In Google Maps
Kouter, Gent, Vlaanderen, 9000, Belgium
+32496519560
View menu
Visit website
Visit Facebook page
Send an Email
Give us feedback

Restaurant, Belgian, $$$
In the peaceful area between the river Sambre and the sea, sumptuous platters of shellfish and oysters await at very reasonable prices. While L’Entre Sambre et Mer keeps it simple on décor, every single dish is bursting with flavor. A menu that changes with the seasons ensures you only eat fresh oysters. If you’re lucky to have oyster season arrive early, you’ll be slurping away in delight on the restaurant’s charming patio in September whilst enjoying the last of the summer sun.
More Info
Open In Google Maps
110 Rue des Brasseurs, Namur, Wallonie, 5000, Belgium
+3281835504
View menu
Visit website
Visit Facebook page
Send an Email
Give us feedback

Brasserie Dock’s and its oyster market in Antwerp

Brasserie, Belgian, $$$
Over a period of 25 years Brasserie Dock’s on the Schelde has steadily made oysters a part of its trademark. Besides serving a whopping six different kinds all year round, they also host a popular oyster and fruits de mer market every year. The maritime mood is enhanced further by its location on the Schelde banks and quirky yet grand interior reminiscent of a cruise ship, designed by Portuguese architect Antonio Pinto.
Looks like it's closed Hours or services may be impacted due to Covid-19
More Info
Open In Google Maps
7 Jordaenskaai, Antwerpen, Vlaanderen, 2000, Belgium
+3232266330
View menu
Visit website
Visit Facebook page
Send an Email
Give us feedback

Restaurant, Belgian, Seafood, $$$
Also a stone’s throw from the river Schelde lies Antwerp’s resident seafood champ, Het Nieuwe Palinghuis. Decorated with a giant wooden helm and old pictures displaying the city’s proud port history, there’s no shortage of nautical charm in this classy restaurant. Chef Erik Haentjes and partner Gonda Vanhulle handle their produce the old-school way: from raw and ready to heaven on a plate. Besides their mussels in a creamy garlic sauce and delectable eel dishes, the oysters are somewhat of a specialty.
More Info
Open In Google Maps
14 Sint-Jansvliet, Antwerpen, Vlaanderen, 2000, Belgium
+3232317445
View menu
Visit website
Visit Facebook page
Send an Email
Give us feedback
Give us feedback