What's On In Belgium In January 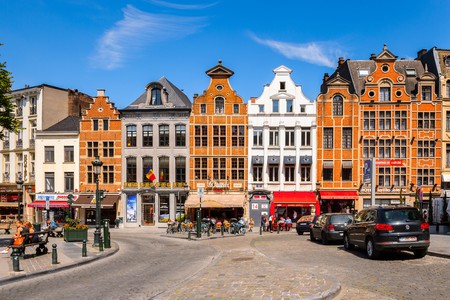 By the time January arrives, Belgium will have immersed itself in the holiday spirit and won’t be ready to let go quite yet. Boisterous New Year’s dives, cozy Christmas tree bonfires, and magnificent ice sculptures keep the merriness alive, while photography exhibitions and jazz festivals keep you toasty and entertained indoors. Welcome to Belgium’s cultural start to 2017.

For the very first time, the tradition of thousands of madmen plunging into the North Atlantic to celebrate the new year will actually happen on January 1st. At 3pm sharp, a merry bunch of ‘polar bears’ will gather in swimsuits and quirky outfits to brave the freezing water together, warm up with a Flemish gin afterward, and bond over an unforgettable start to 2017. Register online or the day of the dive from 11am onwards.

? The ‘Drie Gapers’ site in Ostend, at the municipal swimming pool and the Thermae Palace Hotel

FILM & MUSIC | Chuckle In The New Year With Buster Keaton

For those preferring to spend the first day of 2017 in a more comfortable environment than the cold ocean, Brussels’ Flagey is screening a classic starring the godfather of the visual gag. Laugh it up with Buster Keaton’s splendid physical shenanigans in The General (1926) in the way the silent masterwork was meant to be seen: with live piano accompaniment.

Leuven’s Town Hall is famed for the army of over 200 detailed statuettes on its façade, all representing local counts, scientists, and spiritual figures that were important in the region’s history. Now for its wintertime program, the city is opening up the doors to the building’s attic, where the sculptures’ precious molds and originals are kept. The unique opportunity comes with an hour-long tour in English.

Hasselt’s Christmas market has always been one of the most entertaining in the land, and a big part of the allure are the flocks of penguins, imposing ships, and cute Disney characters, all sculpted out of ice. Walking into the eco-thermal pavilion equals stepping into a magical frozen world, only to emerge duly impressed and ready for a hot cocoa or Nutella pancake to warm you back up.

As a magical winter destination, Bruges likes to provide its visitors with an artsy escape from the cold whenever needed. During its fourth photography festival, this year, 14 beautiful locations such as the Saint John’s Hospital will showcase work by prominent Belgian as well as international shutterbugs. Renowned names Ian Berry and John Vink among others have contributed images relating to the themes ‘Body & Soul,’ and ‘Photography 2.0.’

MUSIC | Get Into All That Jazz In Brussels

January is the month for jazz enthusiasts in Brussels to treat themselves. Besides nationwide concert series Djangofollies (an annual bluesy homage to Belgian guitarist Django Reinhardt), the classic Brussels Jazz Festival by Flagey and the River Jazz Festival are also striking down in the capital. For almost three weeks in the dark winter, you can warm yourself up with the smooth tones of Belgian and European jazz cats performing on numerous stages across the city.

The Modculture sound is alive and well in Antwerp ever since fans of Northern Soul, Britpop, and rare Rhythm and Blues records from the 60s received a home at Mod Allnighters in 2010. Join the fun at their ‘It’s freezing out there’ winter party inside Antwerp’s A-Tower skyscraper.

For the seventh time, the Wallonian village of Bihain will be paying homage to its Great War liberators, the Thunderbolt 83rd infantry division, with a military march. Any war history buff is welcome to join the walk and witness the reenactment of the liberation, including a parade of military vehicles into town. The march starts at 9am sharp, and a celebratory glass of wine awaits at the finish.

Belgians have made bidding farewell to the holiday season an unusually merry occasion by burning their Christmas trees in communal bonfires. It’s a tradition upheld in many villages and cities and is accompanied by a fair amount of hot cocoa, champagne, and Flemish gin. Some cities like Antwerp put on a show with fire breathers and other side events, but most towns keep the get-togethers cozy and simple, such as the coastal town of De Haan, with its bonfire on the beach.

? The beach of De Haan, at the EHBO post

FILM | Fall In Love With The Amateur Home Movie

Ghent’s House of Alijn appreciates the daily and emotional fabric home movies are made up of and invites you to do the same with their ‘Homeless Movies’ project. You can wade into artist Jasper Rigole’s patchwork of flea market home footage – what he calls his ‘archive of other people’s memories’ – or crawl into the six small film booths that screen six shorts, all composed of publicly sourced family films, in a remarkable experiment.

It’s been five centuries since English statesman Thomas More gave rise to dystopian fiction when he published his novel Utopia. The humanist opted for a printer from Leuven, a hub of European academia then and to this day. To celebrate, the city is throwing a three-month cultural festival with an extraordinary exhibition in its M-Museum that boasts 80 masterpieces of More’s contemporaries, all in search of their own utopia.

Tickets: €3-12 (depending on age and reservation method, see pricing here)

‘What’s left of the auteur cinema as described and admired by François Truffaut and Andrew Sarris?’, Cinematek asks this January. A lot it seems, especially when looking at the Royal Belgian Film Archives’ cycle ‘The Global Auteur,’ a global program full of recent titles. Movies like Melancholia by Lars von Trier and Amour by Michael Haneke demonstrate that true auteurs are still instantly recognizable and active today.

Flea market enthusiasts can find a giant playground of knick-knacks and shelter from rough January weather in Mechelen on the weekend of the 21st. BRAS has called the Nekkerhal home for over 30 years and has become known as a warm and spacious haven of bric-a-brac.

DANCE | Flash Back To Swinging Sundays

Ghent’s beloved art center Vooruit is intent on bringing back Sunday afternoon dance extravaganzas. On January 22nd, expert DJs recreate the roaring 20s in the Vooruit’s spacious café where tables and chairs are once again pushed aside to make room for the Lindy Hop, the Charleston, and every other lively partner dance of that golden time.

Instead of bowing its head to the dark winter days and retreating to its couch, the capital takes full advantage of the absence of daylight to ignite its wondrous light installations. All around its inner ring, the metropolis has placed artistic creations for you to discover, from giant old French torches that send beams over the Porte de Namur to a five-meter wide disco ball hanging over Place Poelaert.

?Tour around the inner ring. Find the locations for all light installations here.

NATURE | Stroll Through A Winter Garden In Full Bloom

? From the middle of January

Somewhat north of Antwerp, on the border between Belgium and the Netherlands, lies a green spot that only reveals its true beauty during the winter period. Kalmthout’s Arboretum specializes in winter-flowering plants, among them the ‘hamamelis’ or witch hazel. Frost or no frost, this shrub starts to bloom its vibrantly yellow, orange and red flowers from the middle of January onwards. Kalmthout has the biggest collection of them in all of Europe, and they provide a wonderfully sweet fragrance when following a planned walk through the garden.

Eighteen years of working closely with fellow New Yorker Saul Leiter has provided Margit Erb with unique insights into the work and life of the late photographer. On Sunday, January 29th, gallery owner and co-curator of the FOMU’s current Leiter retrospective will be sharing her perception of the pioneer of color photography who has only recently started gaining the recognition he deserves. Afterward, you’ll be treated to a guided tour by Brigitte Woischnik, co-curator of the retrospective.

The company may have met an abrupt end in 2001, but the ‘Travel In Style’ exhibit lets you experience just how enchanting a flight with Sabena could be in its glory days. The third oldest airline in the world was the first to offer Belgians a window into the sky, with a comfort and service level geared towards the elite. The exposition in three spheres of the Atomium takes you through the entire experience of flying with Sabena, from the check-in to the flight itself, and reconstructs the commercial airline’s 78-year history of providing luxurious travel across four continents.

Tickets: €8-12 (part of the entrance fee to the Atomium, see pricing here)

While the selection at Antwerp’s vintage design fair Dubieus Design may be limited, the chances of finding a unique piece to your liking are actually higher. Each of the European stallholders is required to bring at least three showpieces, making sure that there will be some rare gems present. Pay five euros to get an early glimpse of the retro chairs and 50s collector’s items on Friday evening, or scour the market for free on Saturday.

FESTIVAL | Find The Stage Art You Love At Festival Of Liège

Close out the month on an artistic note with the stage art of your choice. Be it dance, theater or music that you love – or all of the above – the opening weekend of Liège’s International Performing Arts Festival is handing it all to you on a silver platter.