What Is The Best Time of the Year to Visit Belgium? 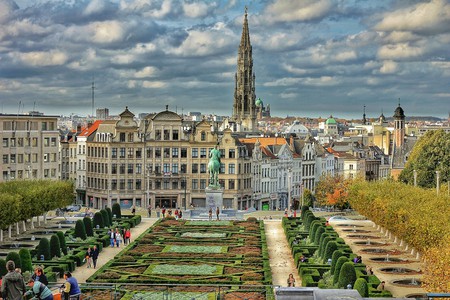 Belgians love to complain about the weather and will tell you that whatever time of the year, it mostly rains in their country – but that’s actually a misconception. Belgium has a temperate maritime climate, with cool summers and moderate winters. Since the country is small there is little variation in climate from region to region, although the temperatures are generally a bit higher inland. Here’s what else you need to know about when to travel to Belgium.

April to September are the drier months of the year with rainy conditions expected only half of the month instead of two-thirds. Fall and winter can be windy and rainy and in the eastern regions the winter months occasionally get heavy snowfall. Whatever the season, always bring a sweater and an umbrella, just in case.

With winter in full swing, days can get a bit gloomy and grey. The sun doesn’t rise until around 8:30 am and says goodbye around 4 pm. Snow is quite rare in Belgium, except in the eastern regions, and it hardly ever snows more than a handful of days each winter. But when it does, the country usually grinds to halt. Public transport will experience massive delays and roads will be jammed with traffic. Hail is more common around this time of year and in the evenings, temperatures might dip below zero. 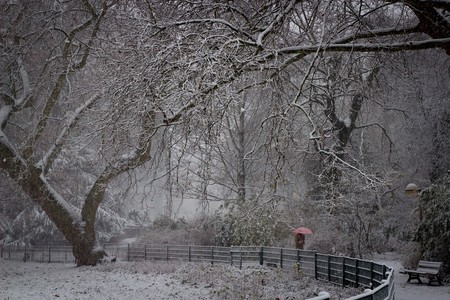 Snow in the Stadspark in Antwerp, Belgium. | © Ester Meerman

Belgium is a predominantly Catholic country, which means they celebrate carnival. Expect excessive consumption of alcohol and lots of parades and people walking around dressed like it’s Halloween. Pretty much every Belgian village celebrates carnival and holds a parade, but the one in Binche near the French border is one of the most famous celebrations in Belgium. Due to its originality and long tradition, this festival was designated as a ‘Masterpiece of the Oral and Intangible Heritage of Humanity’ by UNESCO in 2003. Unfortunately, weather conditions during carnival are mostly cold, with daytime temperatures hovering around 7°C (44°F) and a high chance of drizzle, so make sure to bring an umbrella and wear a warm coat. 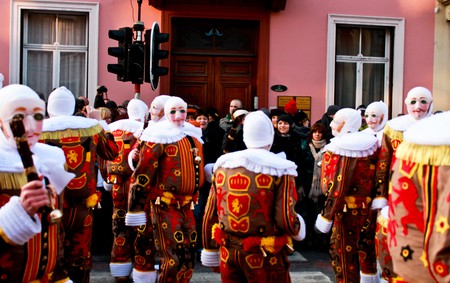 Spring is here and at the first hint of sun Belgians will come out in droves to flood the parks, terraces, and town squares to have a drink or some food and socialise with friends and family. It doesn’t even have to be particularly warm – that’s what sweaters were made for – as long as the sun is on your face, it’s all good.

Don’t be surprised when you happen to be biking around Belgium and you find a bunch of people standing next to the bike path cheering at you. It must be the first day of spring, and it’s ‘Nationale Applausdag voor Fietsers’, which roughly translates to ‘national applaud bikers day’. This means people will make signs, sing songs, and cheer on any cyclists that happen to bike past them.

Early April is when the most important cycling event in Flanders takes place: The Tour of Flanders (De Ronde van Vlaanderen in Dutch). Cycling is incredibly popular in Belgium and everybody and their grandmother will come out to watch this race either along the route, in a café, or on a big screen in a town square. If you want to get in on the festivities just mention you think Tom Boonen was a truly magnificent rider and every Fleming will be your friend for life. A few weeks later, in late April, Wallonia has their own big cycling classic with Liège-Bastogne-Liège. 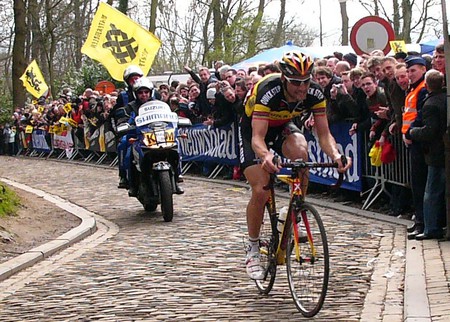 May is a good month to be working in Belgium, as it is usually the month with the most public holidays, depending on what days Pentecost falls. Labour Day, every May 1, has been a public holiday in Belgium since 1948 and because Belgian trade unions have quite a bit of clout, the country pretty much shuts down. Museums and tourist attractions will be open, but don’t expect public services and shops to run their normal schedule. Pentecost usually means two days off late May or early June. The Belgian city of Kortrijk has an annual festival at Pentecost called the Sinksenfeesten, which transforms the entire centre of town into a festival ground, with music performances, street theatre, and flea markets. In Antwerp at Pentecost, the yearly funfair called Sinksenfoor starts. 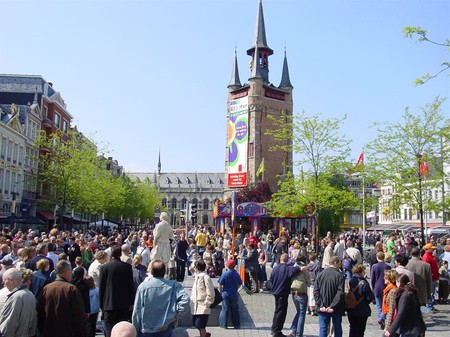 The central market square in Kortrijk during the Sinksenfeesten. | © Speha702 / Wikimedia Commons

Summer is finally here and in Belgium that means lots of outdoor cultural events are on the agenda for the next few months. In Antwerp, it is time for the yearly Zomer van Antwerpen (Summer of Antwerp) festival, with two months of cultural events all across town. Food enthusiasts should head over to Brussels for the Brussels food truck festival, where dishes from all over the world are available for four days. Bear in mind that evenings can still get quite chilly, so remember to bring a sweater. 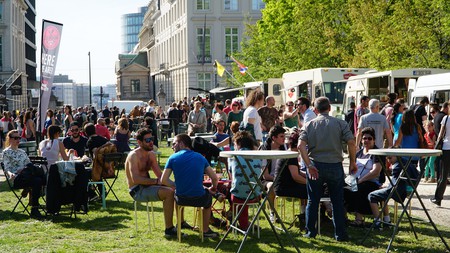 People out enjoying the sun at the Brussels Food Truck Festival in 2016. | © Miguel Discart / Flickr

Get ready to dance and party this month in Belgium with one of the biggest dance festivals in the world, Tomorrowland. Gear up for not one but two weekends of electronic music in the aptly named town of Boom, just outside Antwerp. Meanwhile, Ghent is having its own massive party with the Gentse Feesten taking over the entire city centre for 10 days. Drawing around 250,000 visitors on an average day, the Gentse Feesten is the third biggest festival in Europe. The last day is known as ‘de dag van de lege portemonnees’ (the day of the empty wallets in English), alluding to the fact that many people have spent their last penny at the festival. The 21st of July is Belgian National Day, the nation’s independence day, with most towns organising little music festivals to celebrate. Bring sunscreen as the sun is likely to come around to say hi. 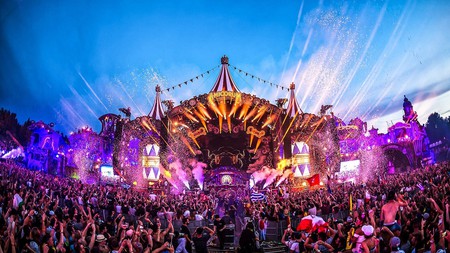 August is Belgium’s month with the least rainfall, so you’re sure to get some rays around this time of year. Belgium has a relatively short coastline though, so in most parts of the country you will have to get through summer without cooling off on the beach. However, every self-respecting Belgian town makes up for that by opening at least one summer bar. They usually open somewhere in April and, depending on the weather throughout the summer, can stay open as late as October. If you do decide to visit the coast, remember that a lot of Belgians will have the same idea and you’re likely to get stuck in traffic or crammed into a full train on the way there. 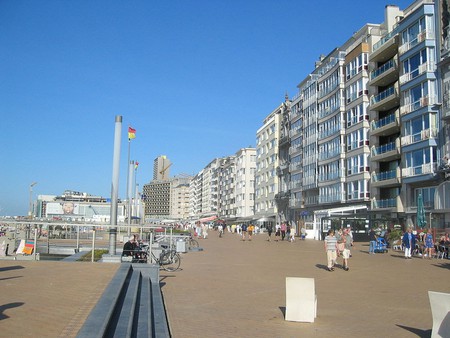 People are back to work and school, so if you’re looking to beat the crowds now is a good time to visit Belgium. Museums, events, and other tourist attractions will noticeably be less busy, especially on weekdays. In Wallonia, the French-speaking part of Belgium, the Festival of Wallonia (or Fêtes de Wallonie in French) kicks off. It is celebrated in the entire region, but centres in Namur, which welcomes around 250,000 people during the festivities. It was introduced in 1923 to celebrate the revolutionary days of the 1800s, and among the attractions are a stilt-walking contest and a moving and funny mass. 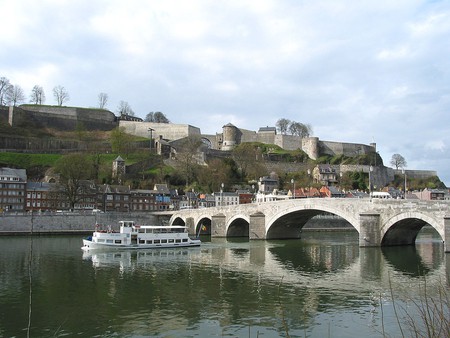 Namur, Belgium, with the Meuse river, the Jambes' bridge and the citadel. | © Jean-Pol GRANDMONT / WikiCommons

Head for some of the many parks in Belgium to enjoy the lovely autumn colours. Antwerp’s Middelheim Park comes highly recommended, as does the Botanique in Brussels. Art aficionados should head to the coast, to Knokke, for the third instalment of the thrice-a-year Art Knokke-Heist festival (the other two are in April and July). This little seaside resort is referred to by Belgians as the ‘St Tropez of the North’ and, with around 15,500 inhabitants, boasts no less than 86 art galleries. During the festival, participating galleries show their best work and have vernissages. It’s an ideal getaway on a rainy day for art lovers (and fans of free champagne). 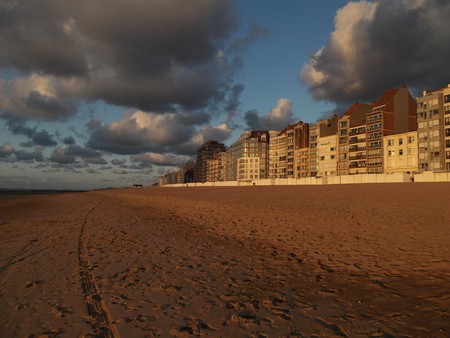 November 11 is Armistice Day, so this seems like a good month to visit one of the many World War I memorials in Belgium. There is the Last Post ceremony in Ypres, where every evening at 8 o’clock, buglers from the Last Post Association close the road that passes under the memorial and sound the ‘Last Post’. Waterloo is of course where the famous Battle of Waterloo was fought, which is still remembered to this day by the Lion’s Mount, a large and artificial hill with a 225-step staircase leading to a statue of a lion. 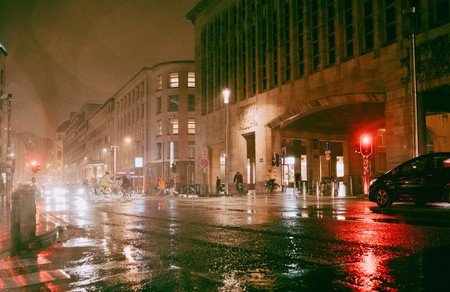 Like many countries in the Western World, Christmas is a very important holiday in Belgium, and many towns and cities will have Christmas markets on in the weeks leading up to it. The market in Brussels is called Winter Wonders and is regarded as one of the best in Europe. Liège also has a Christmas Village, with a funfair, ice skating rink, and over 200 chalets to buy all your Christmas essentials. 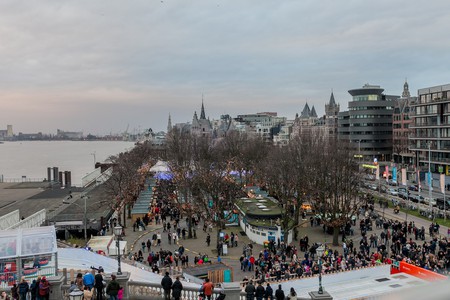 When not to go to Belgium

Unless you enjoy skipping rain puddles and getting soaked to the bone, try and avoid visiting Belgium during November, December, and January, as they are generally the wettest (and coldest) months of the year. If the sun comes out, it is only for a few hours per day. Belgians themselves usually complain about the lack of daylight during the dark and gloomy winter months, so if you visit at this time you might not get the best impression of this small but culturally very rich European nation.