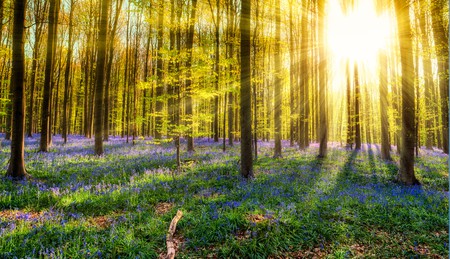 For a period of about ten glorious days, the beech canopy still allows sunlight to reach the undergrowth | © Simon Lukas / Shutterstock

It’s almost here: that one magical week when the ancient Belgian Hallerbos turns into a natural wonderland. Every spring without fail, millions of blooming bluebells work together to form a violet-blue carpet on the forest floor, utterly overwhelming in both sight and smell.

It’s a Belgian nature display made to conquer a place on the nature enthusiast’s bucket list. Standing in this sea of vibrant blue a mere 20 kilometers (12.4 miles) south of Brussels, breathing in its intense colors and sweet floral fragrances, the senses are tickled far beyond what our daily lives and office jobs tend to inspire. Paul McCartney’s final words to Linda as she died were: “It’s a fine spring day. We’re riding through the woods. The bluebells are all out, and the sky is clear blue.” While walking through such a scene yourself, it’s easy to see why the songsmith would choose to vocalize this last picture for his wife. 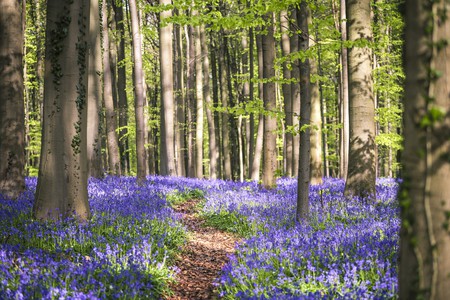 One of the Hallerbos’ winding paths, never to be strayed from during blooming season | © Stefano Termanini / Shutterstock

It’s doubtful that the Beatle was actually referencing the Belgian woods in Flemish-Brabant. Hyacinth carpets have long been a spring fixture in age-old European woods, such as Britain’s Micheldever and others, and are by no means unique to Belgium. Still, it’s the Hallerbos with its slender beeches rising from the violet tapestry that walks away with the “most enchanting” title every time. Its carpet is the densest, its walking paths the windiest and its history as part of the legendary “Charcoal Forest” the most illustrious. Along with the Sonian Forest that pushes its way into the capital to form the region’s crucial green lung, the Hallerbos, or “Bois de Hal,” is one of the final remnants of the Silva Carbonaria, the vast oak-and-beech woods that stretched from Brabant to the north of France during Roman times. On a foggy morning, knowledge of these ancient roots, combined with white mists, provide a particularly mystical atmosphere. 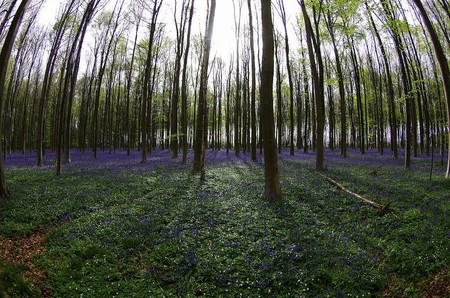 The secret to the “Blue Forest’s” fairytale transformation – as with so many things – is timing. The soil has to be warm enough for the flowers to thrive, but the leafy canopy of beeches can’t be fully leafed out since it will cut off the necessary rays of the sun. That leaves only a golden period of about a week to 10 days during which conditions are just right. Entirely dictated by the weather, this short season is rather a fickle friend. Lately, it tends to show up in April, though up until five years ago the original rendezvous was always set for the beginning of May. This year, the “fairy flowers” are even expected to come around as early as the second half of March.

For a period of about ten glorious days, the beech canopy still allows sunlight to reach the undergrowth | © Simon Lukas / Shutterstock

Naturally, these ever-changing blooming times makes spotting the violet splendor a bit of a challenge. Travelers who’ve made plans to visit the country months in advance run the risk of missing out because they booked the wrong weekend. Then again, its unpredictability has made the Hallerbos somewhat of an off-the-beaten-track tourist experience. Not everyone is aware of the beauty unfolding this close to the tiny nation’s capital, let alone remembers to check the Hallerbos’ website for indications as to when the forest will assume its fairytale veneer. 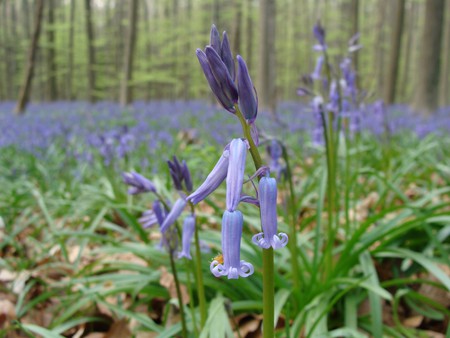 In February, it’s still a reading of the tea leaves, but by the beginning of March, the organization is ready to predict the blooming season. For 2017, they’re confident that the second half of March will be the winner, and during these weeks, they’ll regularly post videos that show the landscape’s progress. When you eventually do get there after religiously checking the page, chances are you’ll be able to come across a tranquil spot where the other nature fans fall away, and it’s just you and the purple-blue ocean as far as the eye can see. Go either early or late on a weekday to increase your chances of this, and whatever you do, stick to the official pathways. Going off-track means crushing the hyacinths’ bulbs, an act of complete sacrilege as this will cause a bare patch in the lush flower blanket next year.