A Walk Along the Comic Strip Route in Brussels 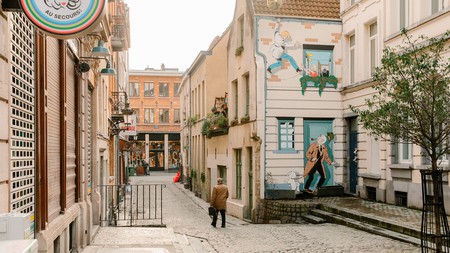 Ric Hochet is just one of the popular artists to make an appearance on the Comic Strip Route. | © Kevin Faingnaert / Culture Trip

When you’re walking around Brussels, you’ll notice that some buildings are covered in large murals of comic scenes. This ‘Comic Strip Route’ pays homage to some of Belgium’s most loved illustrated characters and the artists who created them. But why is the ‘ninth art’ so popular in Brussels? And what are the key pieces to see? Comics aficionado Gareth Clark tells all.

Belgium loves its comic strips. In the Franco-Belgian world they’re known as the ‘ninth art’, one of those slightly odd phrases that has lost all context (few recall the other eight). The more important term to know is bande dessinées (also known as BD), a local definition that covers everything from a four-frame comic strip in a newspaper to a gritty modern graphic novel. And in Belgium they’re everywhere. 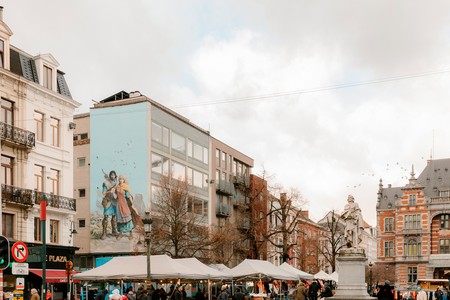 The ‘Thorgal’ mural is one of the most striking on the Comic Strip Route. | © Kevin Faingnaert / Culture Trip

Most locals grew up on the antics of Belgium’s comic icons, as did many others around the world – who hasn’t heard of Tintin or The Smurfs? But their continued relevance is more than just nostalgia. Wander the streets of Brussels and you can barely turn a corner without stumbling over a mural. 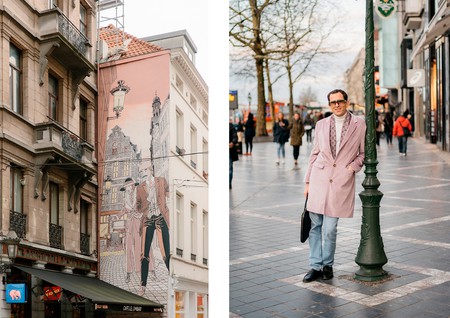 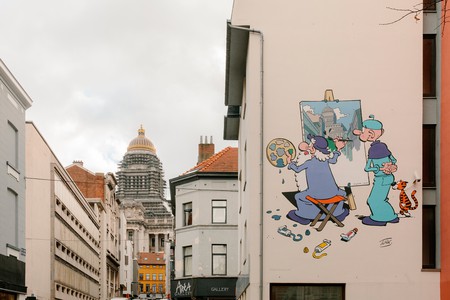 Many of Belgium’s beloved artists can be seen on the route. | © Kevin Faingnaert / Culture Trip

You won’t see Spider-Man or the Joker, though; instead you’ll discover heroes and villains of a distinctly local flavour, and to explore them further is to unravel a little-known history of the city.

The rise of Franco-Belgian comics coincided with a dark period in Europe’s past. During World War II, the printing of US comics was banned in German-occupied France and Belgium. This law was repealed in 1949, four years after the war’s end, but for that brief moment it left the door open to a new wave of comic artists.

One publication that did as much as any to fill this void and cement the legacy of BD was Belgian magazine Spirou. It spawned myriad memorable characters such as André Franquin’s Gaston and Peyo’s The Smurfs. 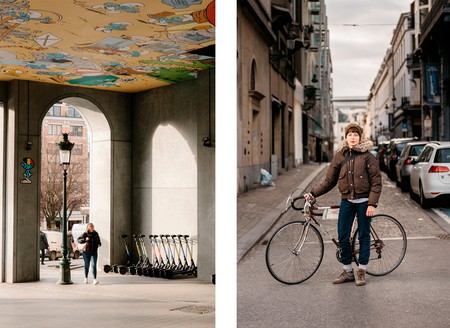 The years between 1945 and 1960 were the golden era of Spirou and Franco-Belgian comics. That time also witnessed the rise of the biggest star of the bande dessinées: Hergé’s Tintin, who would go on to become a phenomenon, selling more that 230 million books.

The adventures of the boy reporter began much smaller, starting out in 1929 as a comic strip in the Belgian Catholic newspaper Le Vingtieme Siecle before it finally got its own magazine in 1946. Tintin‘s rivalry with Spirou would continue for the next 50 years, spawning two very different styles of comic art. 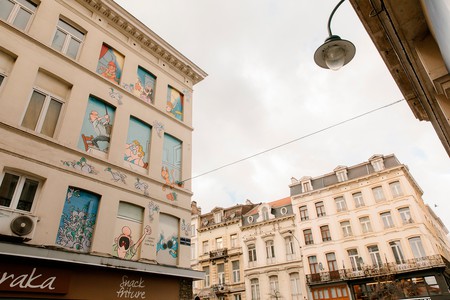 The murals can take up entire sides of buildings, or sometimes fit in smaller spaces. | © Kevin Faingnaert / Culture Trip

Both magazines became a testing ground for new generations of Belgian artists – including the early work of William Vance, who would go on to draw the iconic XIII, an amnesiac thriller series first published in the 1980s – and inspired countless others.

However, there’s one thing all of the above artists have in common: they’re all Brussels natives.

The Belgian capital has ink in its DNA, more so than perhaps any city outside Paris. Over the years it became both a centre and inspiration for a new era of comic book art, partly inspired by the runaway success of local boy Hergé (also known as Georges Remi). 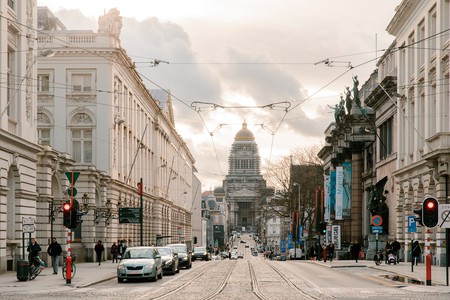 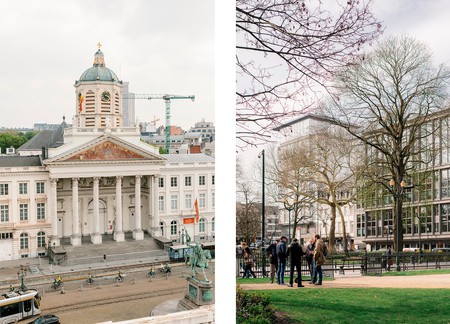 It was little surprise, then, that when the city’s Belgian Comic Strip Centre, a museum dedicated to ‘the ninth art’, commissioned a mural of local artist Frank Pé’s Spirou-published Broussaille series in 1991 on Plattesteen, it sparked an idea. 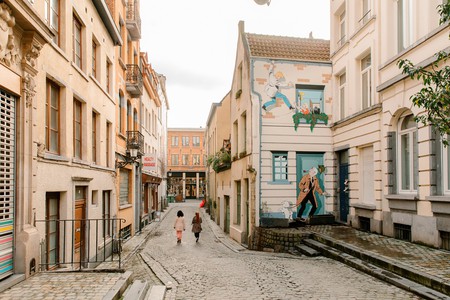 The city has since commissioned a wealth of murals of Franco-Belgian comic characters, forming a trail around its centre and suburbs that extends to nearly 60 locations. Many murals wind corners of the capital in which visitors rarely find themselves, and the route they plot not only unravels the history of the city but also its favourite art form.

What to look out for…

You’ll find works along the trail from all the comic book artists mentioned here, and others besides. But the more you know about them, the more they tell a hidden story. 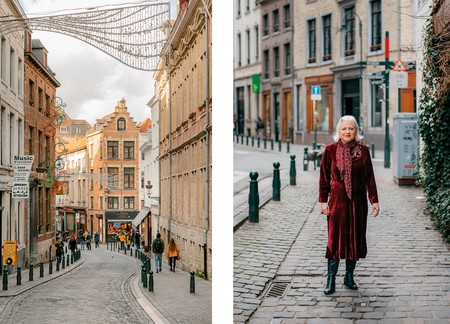 Perhaps the most famous (and recognisable) mural is the fire-escape scene from Hergé’s The Calculus Affair that daubs side of a building on Rue l’Etuve 37 – its heroes, Tintin, Captain Haddock and Snowy the dog scuttling down its steep metal stairs as if brought to life. It’s a great scene and a perfect place to start, as in many ways this character sparked the birth of Brussels’s comic scene. 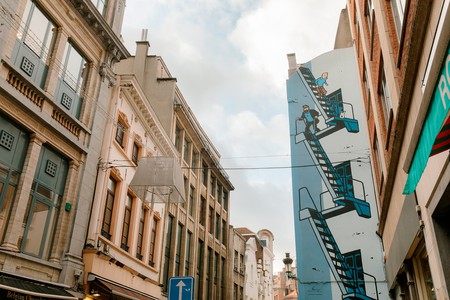 Not all the artists here hailed from Brussels itself, though. Head to Rue de la Buanderie 19 to see a heist scene from Morris’ (also known as Maurice de Bevere) cowboy comic Lucky Luke ingeniously splashed across a building and its neighbouring wall. Morris was a native of Flemish Kortrijk, though like many others he spent his life working in the capital on Spirou, where he met French writer René Goscinny, of Asterix fame, with whom he created his iconic cowpoke. 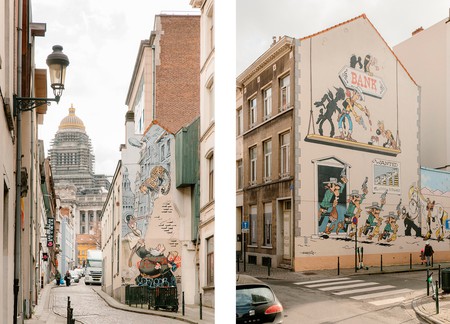 Morris, along with Belgian artists Will and André Franquin, also founded the Marcinelle school of comics that became the house style of Spirou – a kind of cartoonish realism in opposition to the less knockabout aesthetics of Hergé’s beloved ligne claire. Visiting both murals is a great chance to compare the two. 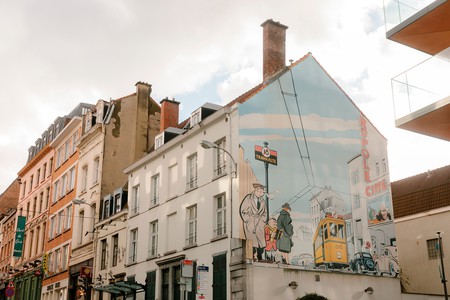 Another of the more interesting murals is that of Yves Chaland, which shows how Franco-Belgian comic art perpetuated. Chaland was a French artist inspired by the first wave of Belgian bande dessinée. His Le Jeune Albert books of the 1980s and ’90s had a certain nostalgia for the work of Hergé and Morris, and his stories told of the boyish pranks of growing up in post-war Brussels, as beautifully seen on Rue des Alexiens 49: a glorious glimpse of the history of Brussels comic art in action.