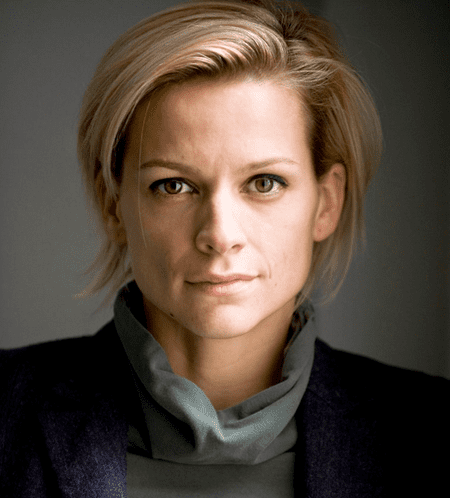 One of the most successful Belgian actresses working today, Veerle Baetens has been a part of some of the biggest series and films to come out of the country in the last decade. The challenges the chameleon from Brasschaat (province of Antwerp) has taken on so far run the gamut, with projects abroad now beckoning. Here, we detail how Veerle Baetens got to where she is today.

With an education at the prestigious Higher Institute for Dramatic Arts in Brussels (also known as Studio Herman Teirlinck) and a background in musical theater, Baetens took her earliest acting steps on stage rather than on camera. From 1998 to 2005 she would throw herself into musicals, winning the Flemish musical award for Upcoming Talent for her spirited portrayal of Pipi Longstocking.

Baetens’ national breakthrough as an actress came in 2007 with the hit show Sara, a Flemish remake of the American telenovela Ugly Betty. Baetens – transformed into an ugly duckling with braces and pimples – portrays a geeky heroine who falls in love with her boss Simon, whom she ends up marrying.

The endearing naivete with which Baetens portrayed the part charmed Flanders – where the love of a good underdog story is strong – to its core. Sara was a far cry from the role of detective Hannah Maes, the tough head of a foulmouthed vice squad she would play a year later on Code 37. She also played the seductive femme fatale Ann, whom the main character falls for in Erik Van Looy’s original Belgian version of Loft (2009).

If these didn’t already testify to Baetens’ wide range, she plunged through a range of emotions in Felix van Groeningen’s The Broken Circle Breakdown (2012). Her character Elise is a tattoo artist who falls head over heels for country musician Didier. The polar opposites attract, and their happiness increases when they have a daughter, Maybelle. But when Maybelle becomes seriously ill, the religious differences between Elise and Didier seem to tear them apart instead of bring them together. Baetens and co-star Johan Heldenbergh both sing in the film.

Since then, Baetens career has been propelled into an increasingly international direction. The 2013 Starz miniseries The White Queen saw her play Margaret of Anjou as a tough cookie. She also got to represent Belgium in The Team (2015), a European crime drama in which detectives from three different countries work together to solve a triple murder that took place in three European cities.

Baetens’ most exciting recent performances again took place on the big screen. She has been compared with the French movie legend Arletty for her performance in Emma Luchini’s Un début prometteur (2015), which looks at all sides of love, yet always lightheartedly.

This comedy again casts Baetens in the role of a seductress, though of a more smiley kind than the one she portrayed earlier in Loft. As Mathilde, an impulsive woman who captivates the attention of brothers Martin and Gabriel, she once again exercised her vocal chords on film by charmingly performing ‘Mes Hommes’ at a wedding.