Despite Antwerp’s diminutive size, this Belgian city is steeped in creativity – from the Flemish masters to the experimental fashion designers and some 20,000 jobs created by the flourishing industry. Cash stipends, the potential for global recognition and the celebrated Fashion Department at Antwerp’s Royal Academy of Fine Arts have helped make the country an incubator of talent, drawing attention from the established fashion capitals of nearby Paris and London. These are the country’s finest fashion designers.

Raf Simons trained in industrial design, and is renowned for his hodgepodge of influences that are spliced together to create a streamlined vision. References include pop culture, art, music and cinema – think Flemish painters on couture gowns and Leonard Cohen lyrics across hoodies. Since switching from furniture to fashion design, Simons has amassed a cult following that flocks to whichever house he helms, who are drawn to his streetwise yet artistic sensibility and bricolage of references. His notable appointments include Jil Sander, Dior, Calvin Klein and Prada. 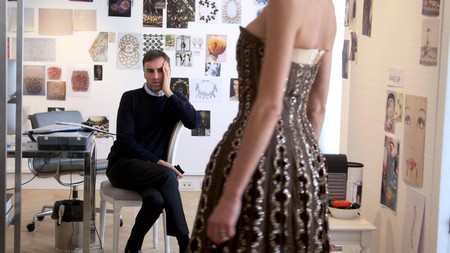 Martin Margiela graduated from the same fabled Antwerp institution – Royal Academy of Fine Arts – as the ‘Antwerp Six’, an influential group of designers from the class of 1980. But unlike the group, he didn’t make the schlep to London that cemented their careers – instead he was recruited by Jean Paul Gaultier in Paris. The designer is notoriously elusive – only a smattering of photos exist and he doesn’t give interviews. Meanwhile, he retired from his namesake house at the height of its fame in 2008, but remains a powerful force shrouded in fashion folklore.

Italian Anthony Vaccarello’s seductive silhouettes and old-school sex appeal strikes a dramatic tone that’s led to positions with Italian powerhouses, including Fendi and Versus Versace. A mix of disco tropes, razor-sharp tailoring and retro references characterise his oeuvre as Creative Director of Saint Laurent; Swarovski crystal-encrusted boots worn by Rihanna and Cardi B continue his legacy as a master of modern power dressing. He has the red carpet approval of Hollywood icons like Jennifer Lopez. 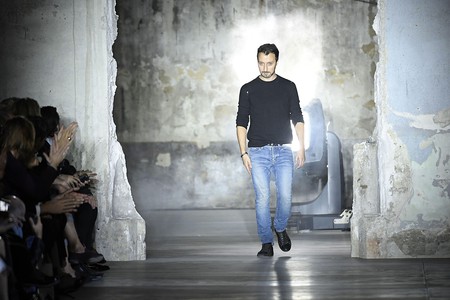 Olivier Theyskens decided to become a couturier at the age of seven – and this singular vision continued throughout his career, which spans holding posts at prestigious houses such as Nina Ricci and Rochas. Theyskens launched his eponymous brand in the 1990s, encapsulating the dark romanticism of the era, and has created costumes for grunge alt-rock band the Smashing Pumpkins.

Another alumni of the prestigious Royal Academy of Fine Arts, Kris Van Assche is known for assimilating urban tropes into the house codes of heritage labels like Dior Homme and Saint Laurent under Hedi Slimane. Bringing streetwear to storied fashion houses led to campaigns with hype musicians such as A$AP Rocky, Oliver Sim of The xx and Travis Scott. In 2015, he benched his eponymous brand to focus solely on Berluti, where he is Creative Director. 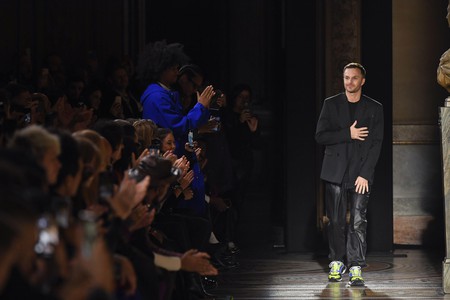 The most commercially successful of the Antwerp Six, Dries Van Noten is fiercely individual. The designer rejected advertising, the allure of designing for the heritage houses who’ve tried to recruit him since he launched his eponymous label in 1986 and, until 2018, investment. Van Noten still lives in Belgium, cycling to his Antwerp atelier every day – where he spins fantastical creations that draw on his deep love of travel and gardening. In 2017, he celebrated his 100th show with a collection of bombastic prints from his thirty-year archive.

Walter Van Beirendonck is often described as wild – ‘Wild and Lethal Trash’ was the name of his 1990s line with Mustang – and is renowned for his playful yet politically-charged collections. Bursting with bold colour and critical statements – often in the form of slogans lambasting everything from the Aids crisis to capitalism – his offbeat collections have garnered media attention since first launching as part of the Antwerp Six. For Van Beirendonck, fashion is a vehicle for voicing social concerns – the most notable example is the AW 2006/07 collection ‘Stop Terrorising our World’. 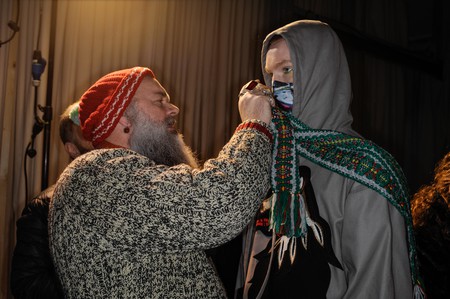 Infused with a punk sensibility, Ann Demeulemeester chafed against the constraints of the celebrated Royal Academy of Fine Arts, where she felt pushed towards becoming the next Coco Chanel. A monochromatic palette runs throughout collections that blend bohemian flair – dove feathers are a recurring feature – with darkly gothic romanticism. Like other members of the Antwerp Six, Demeulemeester dedicated her time since leaving her namesake brand in 2013 to other mediums, including ceramics and tableware in collaboration with Serax.

Dirk van Saene, born with artistic roots to a family of painters, has never been tied to fashion as a medium for creative expression. Unencumbered by shareholders, van Saene forgoes seasonal shows in favour of presenting when he feels inspired to – an anti-trend approach other designers are moving towards. Today, van Saene has a store with fellow Antwerp Six member Walter Van Beirendonck, while his other artistic ventures – namely painting, ceramics and sculpture – have showcased in galleries across Europe.

Despite being part of the visionary group, Marina Yee bristled with fashion and its consumerist tendencies. An early adopter of upcycling, Yee is known for one-of-a-kind pieces crafted from thrift-store finds that provide a medium for her commentary on the industry’s overindulgence. Almost as elusive as Margiela, Yee shied away from fashion’s unrelenting spotlight; first going quiet in 1988 before returning in 2005 with a capsule of reworked pieces shown at Paris Fashion Week, only to slip away again until 2018 when she cropped up with an eco-conscious collection titled M.Y. Project.

The final member of the avant-garde Antwerp Six, Dirk Bikkemberg quickly recognised the symbiotic nature of sport and fashion. First launched as a shoe line, Bikkembergs drew influence from military footwear, while determined to show at Paris Fashion Week – for SS89 Bikkembergs expanded into clothing. Early designs fused sportswear with couture-level craftsmanship, decades before trainers and gowns would become commonplace. Drawn to the practicalities of fashion, Bikkembergs found inspiration in the uniforms of sailors, bikers and racing drivers before creating kits for Inter Milan, a position he still holds. 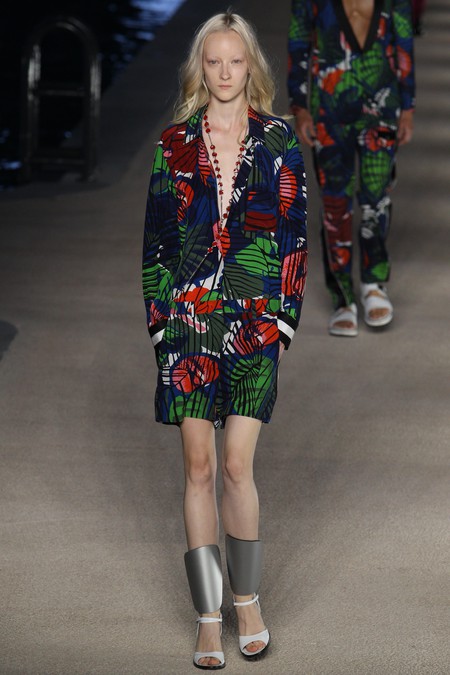 A darling of New York’s 1970s social scene, Diane von Furstenberg is often considered an American designer thanks to her reputation as a denizen of Studio 54 and role as President of the Council of Fashion Designers of America (CFDA). Born and raised in Brussels in 1946, von Furstenberg first catapulted to fashion fame – she’d already secured her social status as the wife of Prince Egon zu Fürstenberg – with the wrap dress in 1972. The style is considered a house hallmark and has become a visual shorthand for the brand, as well as a statement on the era’s spirit of female liberation. 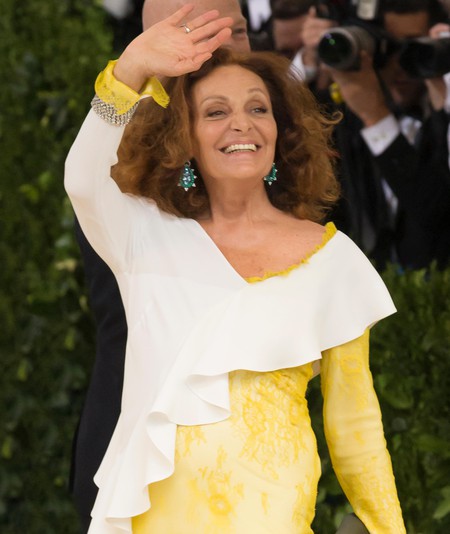 Despite being a little-known brand today, Liz Claiborne was once a hugely profitable and sought-after label. Launched in 1976, Liz Claiborne set a string of firsts in motion and was the gold standard for female-fronted brands. She created the first Fortune 500 company that was founded by a woman, helmed by a female CEO and had a female chairperson. The namesake designer exited in 1989, after a decade of marrying function and fashion together in well-priced collections that answered the demands of the emerging female workforce.

Known for his eccentric millinery, Elvis Pompilio has created bespoke hats for fellow Flemish designers such as Ann Demeulemeester and Véronique Branquinho. Though the designer hasn’t reached the same lofty heights as some of the labels he’s worked with – such as Chanel and Céline – Pompilio’s hats have graced the heads of celebrities as varied as Madonna and Mickey Rourke to royals across Europe. He’s outfitted the Queen of Belgium, plus designed costumes for operas that play to his flair for fantastical design. 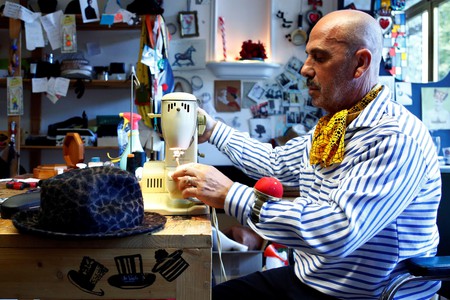 One of the earliest celebrated Belgian designers, Olivier Strelli’s importance for the country was cemented when he was voted number 56 in the “100 greatest Belgians of all time”. Launched in 1976, Olivier Strelli’s collections have been seen on the Rolling Stones and Brigitte Bardot – though latterly has found patrons within the Belgian royal family. Print, pattern and bold use of colour continue to characterise his designs which pull inspiration from far-flung countries. 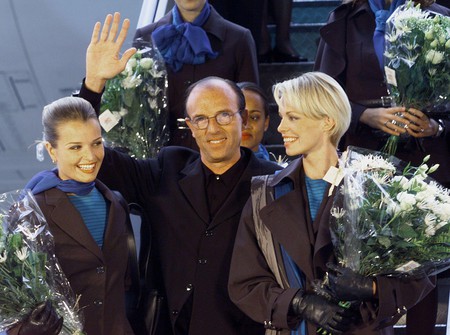