Father of Tintin, Quick and Flupke and The Adventures of Jo, Zette and Jocko, Hergé is a name etched in comic book history. We take a look at the gifted Belgian cartoonist’s life, his beloved boy reporter, and a legacy in which the shadow of World War II accusations loom large.

One of the most popular paper heroes to emerge out of Belgium in the cartoon boom that was the 20th century, Tintin never depended on the power of flight or giant biceps bulging out of spandex suits like many of his comic strip peers. Instead, the young doe-eyed reporter counted on his courage, loyal canine companion Snowy and an unwavering moral compass to steer him through his adventures in the Soviet Union and excursions to the moon. It is this steadfast moral certainty, however, that is often questioned in the young journalist’s creator.

Georges Prosper Remi – ‘Hergé’ because it was deemed cooler in primary school to call someone by their transposed initials (making Georges Rémi sound like ‘Air-zhay’) – was a true blue Brusselaar, born in Etterbeek in 1907 to a lower class family. Early life was never smooth sailing for the intelligent student, as his childhood appears to have been a mix of dullness with bouts of mystery thrown in. His Walloon father, Léon Remi, was part of a twin of contested parentage and the brothers looked so much alike that Hergé’s mother, the Flemish Elisabeth, would ask them a series of questions so as not to share a bed with the wrong one. One can’t help but be reminded of Thomson and Thompson in the Tintin series, the floundering detective duo that looks near identical, yet the slight difference in their surnames indicates that there is no blood relation. ‘Not everyone is lucky enough to be born an orphan,’ Hergé, who mostly liked to keep up the public persona of jovial craftsman, once let slip. It’s no wonder then that Tintin goes through life unburdened of any family, or even lover, to speak of.

Hergé’s guiding light throughout his youth would be the Catholic scouts, a boy troop that opened up his world in their excursions to Paris’ Eiffel Tower and German lakes, and that has no doubt influenced Tintin’s adventures abroad. It was Le Boy-Scout Belge magazine that would publish the gifted sketcher’s first series, The Adventures of Totor, with a scouts leader in the title role – a kind of Tintin avant la lettre. 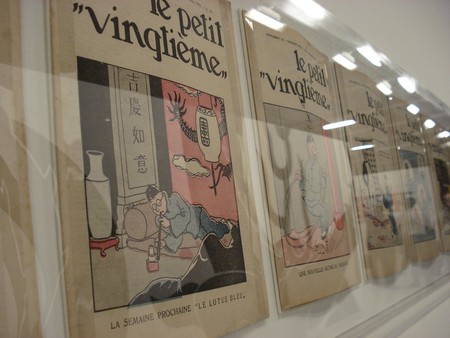 Next came the conservative Catholic newspaper Le Vingtième Siècle, the publication that would introduce the boy reporter to the world, but which would also be the first chapter in a series of fascist-leaning employers. As the tuft-haired journalist exposed the Bolshevik regime in the children’s pages of Tintin in the Land of the Soviets, the strip’s commercial success prompted editor-in-chief Father Norbert Wallez – who had a framed picture of Mussolini on his desk – to commission another series, this time urging Hergé to send his characters to the Congo in support of the Belgian colonial system.

The result was Tintin in the Congo, an album in which the natives are depicted as uncultured simpletons in need of European guidance. The now cringe-worthy and patronizing attitude was largely reflective of European society at the time however and, boosted by publicity stunts, Tintin’s popularity soared at home as well as in France. Ultimately it was Hergé’s years at Le Soir, a Nazi propagandist mouthpiece during World War II, that would forever brand the cartoonist with the stamp of collaborator. Especially damning was 1941’s The Shooting Star, which pits our hero against a hook-nosed Jewish financier by the name of Blumenstein.

Finally Tintin in the Congo is Mine!!!🙉🤘🏻🙌🏻👦🏼👦🏿🦁🐅🐘 Just a few adventures to complete the collection👍🏻 #tintin#tintininthecongo#tintincongo#racistbook#egmont#herge#hergé#theadventuresoftintin#tintinfan#comics#tintincomics#rarefind#acollectorsmust#musthave#bannedbook#banned

In the wake of the war Hergé was arrested many times but never sentenced like many of his compatriots who had worked for German-controlled publications. After a two-year exile from the press, he was eventually allowed to return to work when former resistance fighter Raymond Leblanc put his neck on the line by giving the cartoonist his own Tintin magazine in 1946. Though deeply scarred by the widespread condemnation and by that time prone to bouts of depression, Hergé carried on to complete 24 albums before his death in 1983, which meant a wrap on the series since Tintin was always meant to be the work of one man’s extraordinary imagination.

While today there are still people leaping to Hergé’s defense and others criticizing the flawed characterizations in his early work – a new back-and-forth was fired off when Spielberg’s film adaptation hit theaters in 2011 – there’s no denying the qualities that made Tintin one of the biggest European comics of the 20th century. The cartoonist’s early fondness of cinema seeped through into the boy reporter’s grand-scale adventures in far-off lands, the exotic details of which, through rigorous research, Hergé made all the more tangible. The physical shenanigans of fumbling officers Thomson and Thompson recall the slapstick glory of Charlie Chaplin and Buster Keaton. Side characters, such as the whiskey-swilling Captain Haddock, shrill opera diva Bianca Castafiore and near-deaf Professor Calculus, are made endearing because of their flaws, providing a welcome counterbalance to do-gooder Tintin. A lot of Tintinologists – dedicated researchers of the albums and their creator – would argue that Hergé’s talents soared during the War, since Tintin is escapism at its very best.