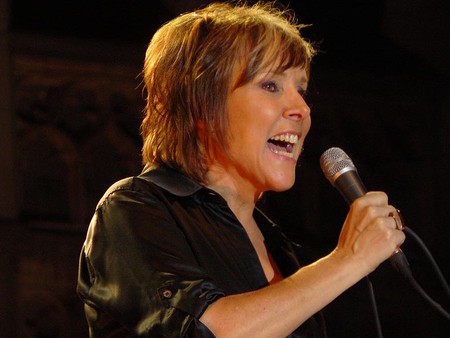 The biggest musical act to ever come out of Belgium, Vaya Con Dios (‘Go With God’ in Spanish) said its final farewell in 2014 after decades of international success. Despite a turbulent moment during its beginnings in the late 1980s when one of its founders left, the band succeeded in introducing a new flavor of jazz, soul, Gypsy and Latin sounds to the country. Here are a few of their best songs, guided by the distinctive voice of leading lady and driving force of the band Dani Klein.

The song with the gibberish title was easily Vaya Con Dios’ biggest crowd pleaser during concerts. In the delightfully old school black and white music video, Klein invites her friends out for drinks at ‘Curly Pearls’. The dancing and swinging that ensues makes you want to put on your heels and call up your girls for a ladies night of your own. ‘Oh lord did we have a ball,’ Klein sings smiling and we have no trouble believing her.

Noticeably less of a girl power song – the title lyric continues on to say ‘without a man’ – describes the heartbreak and shame of being cheated on. The soulful ballad remains Vaya Con Dios’ most successful song to date, as it topped the charts all over Europe.

Just A Friend Of Mine

An early hit in their beginning years, the 1988 clip to ‘Just A Friend of Mine’ has all the ingredients of a classic Vaya Con Dios music video: a dressed up, provocative Klein in the spotlights surrounded by musicians that double as backing vocals, alternated by a dramatic acting out of the lyrics.

It’s the Latin vibe in songs like ‘Puerto Rico’ that make sure most people hum along to the worldly melodies of Vaya Con Dios without realizing the band actually hails from tiny Belgium. That wasn’t the point after all. Headstrong Dani Klein and her rotating cast of musicians had a fondness for crossing borders and blending styles.

In ‘Don’t Cry For Louie’ a girl falls for a no good pimp no girl should ever waste any time shedding tears over. Time and again, Klein, who wrote and produced most of the songs, would imagine whole stories and backgrounds to tell in her lyrics.