The Best Hotels in Liège, Belgium 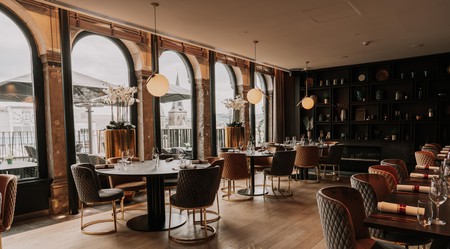 Forget Brussels. Liège is the true capital of culture in Belgium. Rich in gastronomy, history and architecture, the city’s hotel offerings are just as enticing.

Nicknamed “the ardent city” for its fiery history, Liège packs churches, galleries and bars into its winding, ancient streets. The city’s reputation as a centre for culture and entertainment goes back centuries, with theatres, parties, museums, great food and a cheeky puppet mascot all symbols of this Wallonian city. An hour from Brussels by train, Liège feels warmer and more welcoming than the capital. Here are eight places to stay that showcase the city’s charms, bookable on Culture Trip. 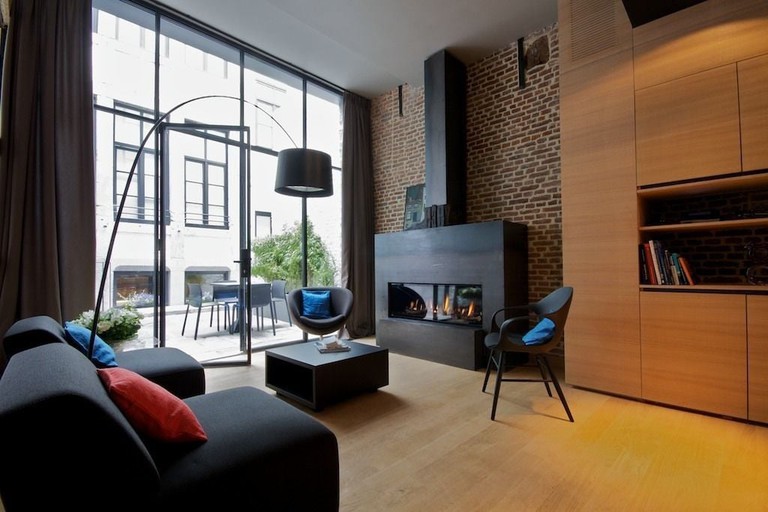 Courtesy of Hotel Neuvice / Expedia
Book Now
Consisting of three 18th-century wooden buildings surrounding a bamboo-shaded courtyard on the oldest pedestrian alleyway in Liège, the Hotel Neuvice enjoys an unrivalled heritage. The narrow, shop-lined street outside was once a medieval hub for printers and goldsmiths, and today the hotel includes a former bookseller’s house. The Place du Marché, Saint Lambert’s Cathedral and the Opéra Royal are all just steps away. Opened in 2012, the rooms here are immaculately modern, using natural brushed oak and varnished raw steel. The breakfast is local and organic; don’t miss the fruit-packed conserves made from gooseberries, rhubarb or cherries. 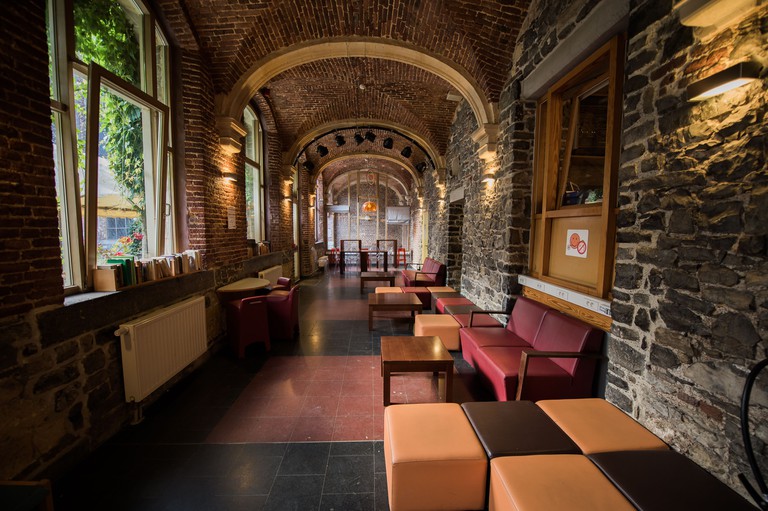 Courtesy of Liège Youth Hostel / Expedia
Book Now
With 344 beds, communal spaces and a bar in a renovated convent, this big youth hostel is party central. The decor is playful with table football, neon signs and strings of lights contrasting with the timeworn brick archways of the original building. The nightly fee includes an eco-friendly, locally sourced breakfast buffet with fresh bread, cheeses and fruit. Be sure to leave room for the sugar-topped waffles, famous here and available across the city. On an island in the River Meuse, close to the market and the characterful Musée Tchantchès, the hostel is bang in the middle of the city. 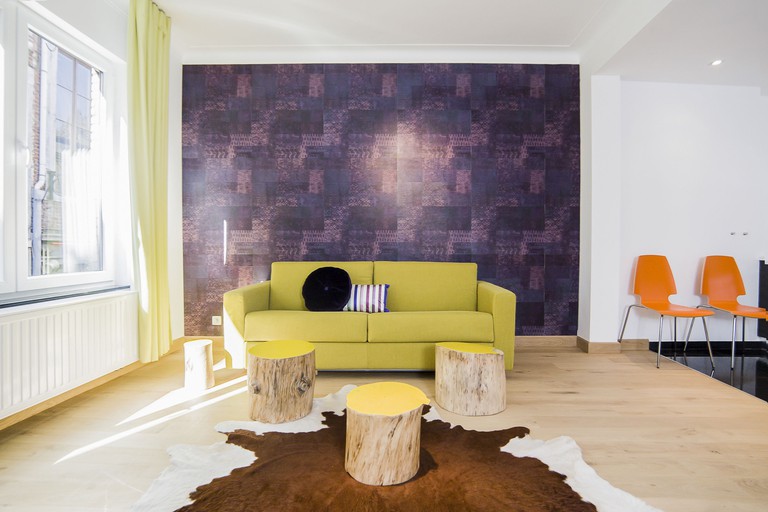 Courtesy of Smartflats / Expedia
View Rooms
With 25 apartments across the city and online reception 24/7, Smartflats is a good option if you’re picky about location and facilities. Need a modern flat with a balcony and a view of the cathedral? You got it. Split-level for six near the opera? Check. Shop-lined alley in the heart of the action? Take your pick. Unlike the corporate blandness of some aparthotels, these stylish places feature plants, wooden floors, quirky art, colourful cushions and outdoor furniture on patios and roof gardens.
More info 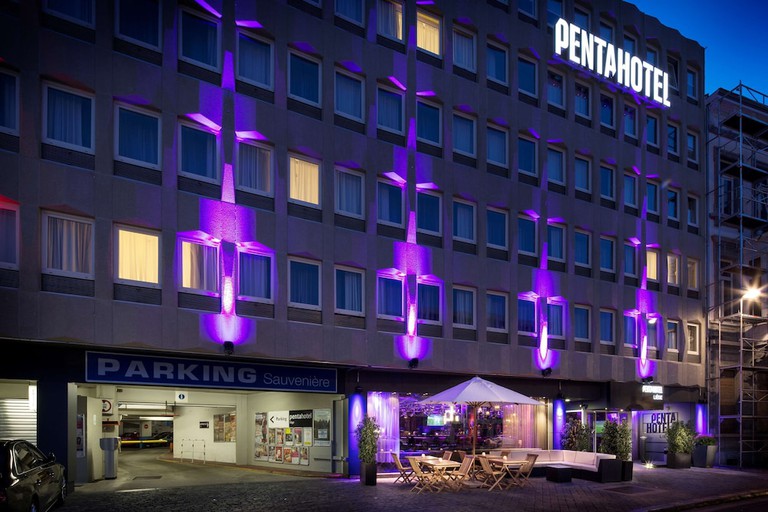 Courtesy of Pentahotel Liège / Expedia
View Rooms
This brutalist block on the curving Boulevard de la Sauvenière has good-sized rooms, wallpapered with a giant map of the city. There’s even a special Playerpad suite for gamers, with its own lounge, mega-screen, pinball and retro gaming machine or PS4, all likely to cheer up teens bored by too many art galleries. The Penta has a gym, an open-all-hours lounge and bar with billiard table, whilst breakfast is included. At other times, you can order herby duck risotto, the mighty Pentaburger or a citrus-infused crème brûlée. Better still, head off to explore the maze of pedestrianised lanes around the corner, full of fancy chocolate shops, Cuban cocktail bars and pizza vendors.
More info 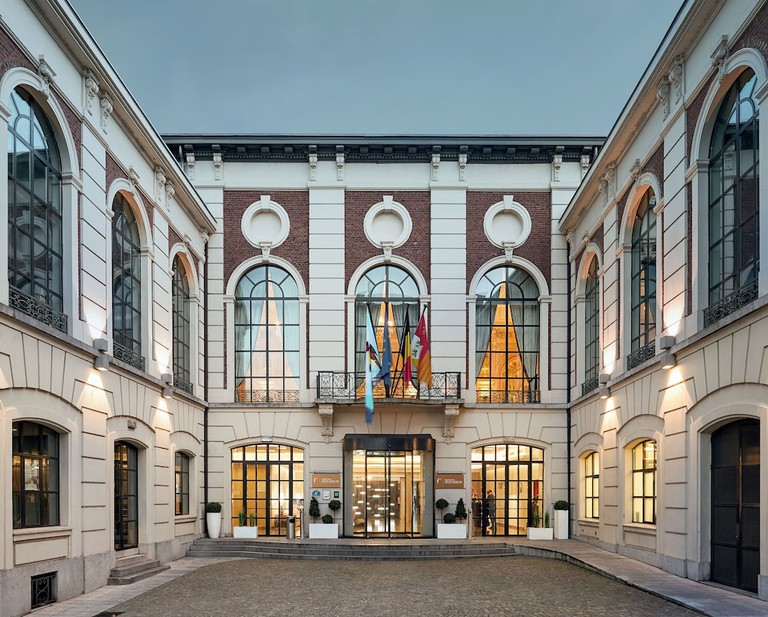 Courtesy of Van der Valk Sélys Liège Hotel and Spa / Expedia
View Rooms
At the heart of this imposing U-shaped hotel with a spa on the Rue du Mont Saint-Martin are two 15th-century mansions whose sloping beams and arched windows make the historic rooms here so special. Eat confit rabbit with sage and champagne sabayon surrounded by ornate gilded wood and delicate murals. Drink draught Hoegaarden Rosée on the summer terrace, watching the sun set over the roofs and towers of Liège or under the vaulted brickwork of the Cave Bar. The hotel is just across the boulevard from the huge City Mirror cultural centre housed in a former bathhouse.
More info 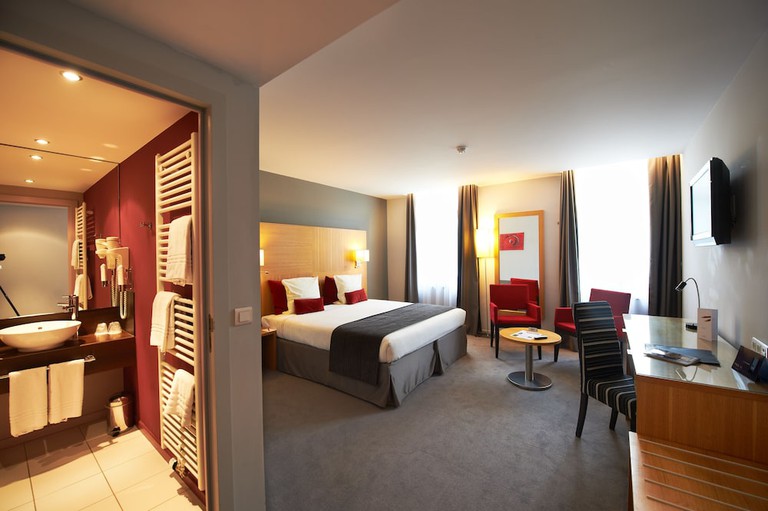 Courtesy of Hotel de la Couronne / Expedia
View Rooms
Arrive at Liège-Guillemins by train and step straight into the smart rooms of the modern Couronne: you couldn’t get closer to Santiago Calatrava’s sweeping, otherworldly steel and glass-roofed railway station without sleeping on the platform. Kick off a day’s business or sightseeing with a Spanish omelette or rich dark chocolate cake from the breakfast buffet and end it with local beers in the business-friendly bar. With dozens of neighbouring eateries in Rue des Guillemins, the hotel doesn’t bother having its own restaurant, but staff are happy to recommend quality spots nearby.
More info 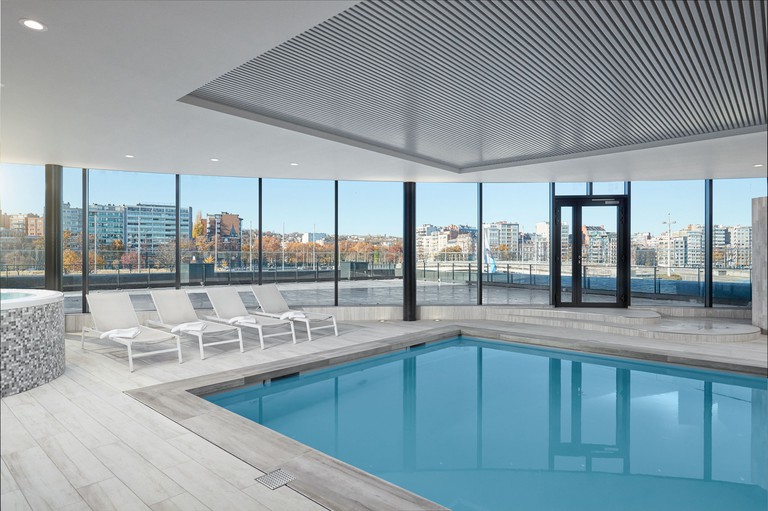 Courtesy of Van der Valk Hotel Liège Congres / Expedia
View Rooms
This 10-storey renovated 1970s block, next to the riverside Palais des Congres convention centre, stands at one end of the petite and picnic-ready Parc de la Boverie with its leafy paths and ornamental bridges. Sit at the park’s waterfront Villa du Parc to eat boulets à la liégeoise (meatballs) or strawberry melba. The hotel itself has five different bars and places to eat on-site, including the bookable Sky Bar for a panoramic cityscape backdrop or light-filled Restaurant W for classic bistro-style dishes like caesar salad or steak tartare. The corporate chic rooms include apartments and suites with canopy beds, steam showers or a jacuzzi.
More info 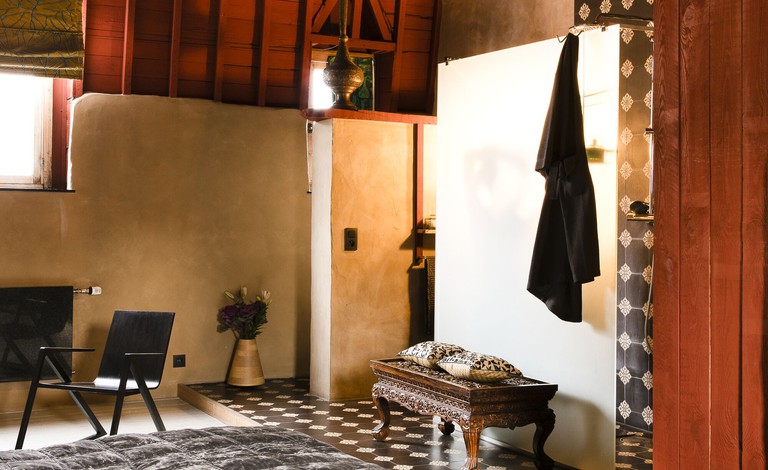 Courtesy of Villa Thibault / Expedia
View Rooms
At the junction of three old cobbled streets, this 19th-century mansion is part of the jumble of gables and windows that give Liège so much character. Art lovers Serge Schoonbroodt and Guido Vonk bought the house in 2009 and have restored it without destroying its individuality. Sloping attic ceilings, a balcony, tiled floors, carved wood or painted bricks make each of the three rooms totally different, each filled with treasures from the flea market. The organic breakfasts are as thoughtful as the decor, with fluffy omelettes, fresh crispy rolls and pastries.
More info

This is an updated rewrite of an article originally by Nana Van De Poel.