Meir is the number one street for shopping in Antwerp, and beyond that, the most prominent shopping street in all of Belgium. It’s also one of the most expensive shopping streets in the Benelux, so come here to spoil yourself or get a gift for someone really special. Located in the heart of Antwerp and designed for heavy foot traffic, the Meir is very pedestrian-friendly and makes for a lovely afternoon stroll, taking in the grand window displays of the shops and the ornate Rococo architecture. Read on for our list of the top 10 things to explore along this vibrant boulevard. 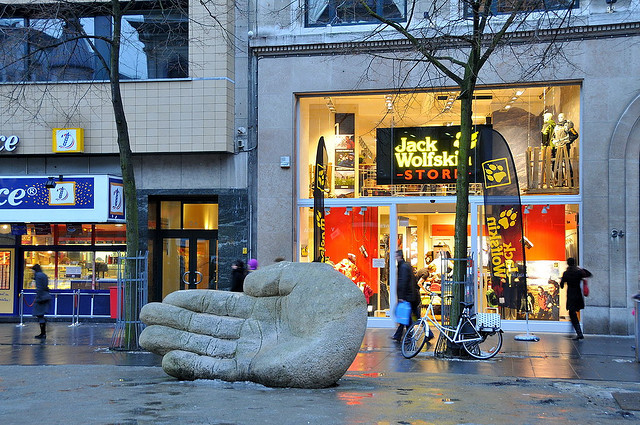 Of course, the main activity to do in Meir is shopping – or window shopping at the very least. Stadsfeertzaal is a hidden gem in Meir, a beautiful luxurious shopping gallery where you can also take a relaxing break over coffee or lunch. Inaugurated as a banquet and exhibition hall in 1908 and then destroyed in a fire in 2000, the structure was recently restored and made into the bustling commercial hub you see today. Even if you’re not interested in shopping, this historic building is worth a look just for its beautiful architecture and Art Deco design: the ceiling is of particular interest, a survivor of the fire that remains preserved after over a century. 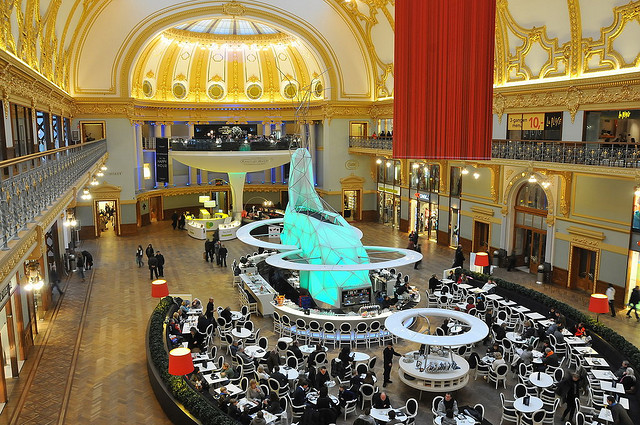 If you’re not a big shopper, there’s still plenty to see on the Meir, especially for fans of history, architecture and design. Lysstraat (or Leys Street) is the unofficial entry point where pedestrians take over the Meir, flanked by impressive 19th century buildings full of fascinating decorative details. At the start of the street you’ll find a statue of David Teniers, a local painter celebrated throughout the region, as well as two particularly striking, symmetrical edifices which create the impression of a gate welcoming guests into the Old Town.

Built in 1745, this elegant palace was once the Antwerp residence of Belgian kings after Belgium gained its independence, but it had a long, colorful history of prior owners before that. Together with the Osterrieth House, this is one of the the two most impressive Rococo structures on the Meir. Napoleon bought the palace in 1811 for its favorable location, although he never actually lived in it himself. Later, in the 1960s, the palace took on its role as the current location of the Ministry of Dutch Language, which has since organized many cultural events in the building. The Royal Residence was recently renovated in 2004 and again in 2010, but to this day it’s kept many of its original, gorgeous palatial furnishings. Guided tours of the palace can be scheduled by calling their helpful reception desk.

The Osterriethhuis (Osterrieth House) was built in 1746 in full Rococo-style. Also called Hotel van Susteren-du Bois, this mansion was acquired by Ernest Osterrieth in 1874 and later, in 1948, by the Bank of Paris and the Netherlands, which renovated it and converted the left wing into offices. Today, the building maintains its historical features, and it is decorated with paintings, sculptures and tapestries. The most noticeable pieces of arts are six chairs created by the furniture makes of the French king Louis XV and two sketches by Rubens, The Rape of the Sabine Women and The Reconciliation of the Romans and the Sabines. 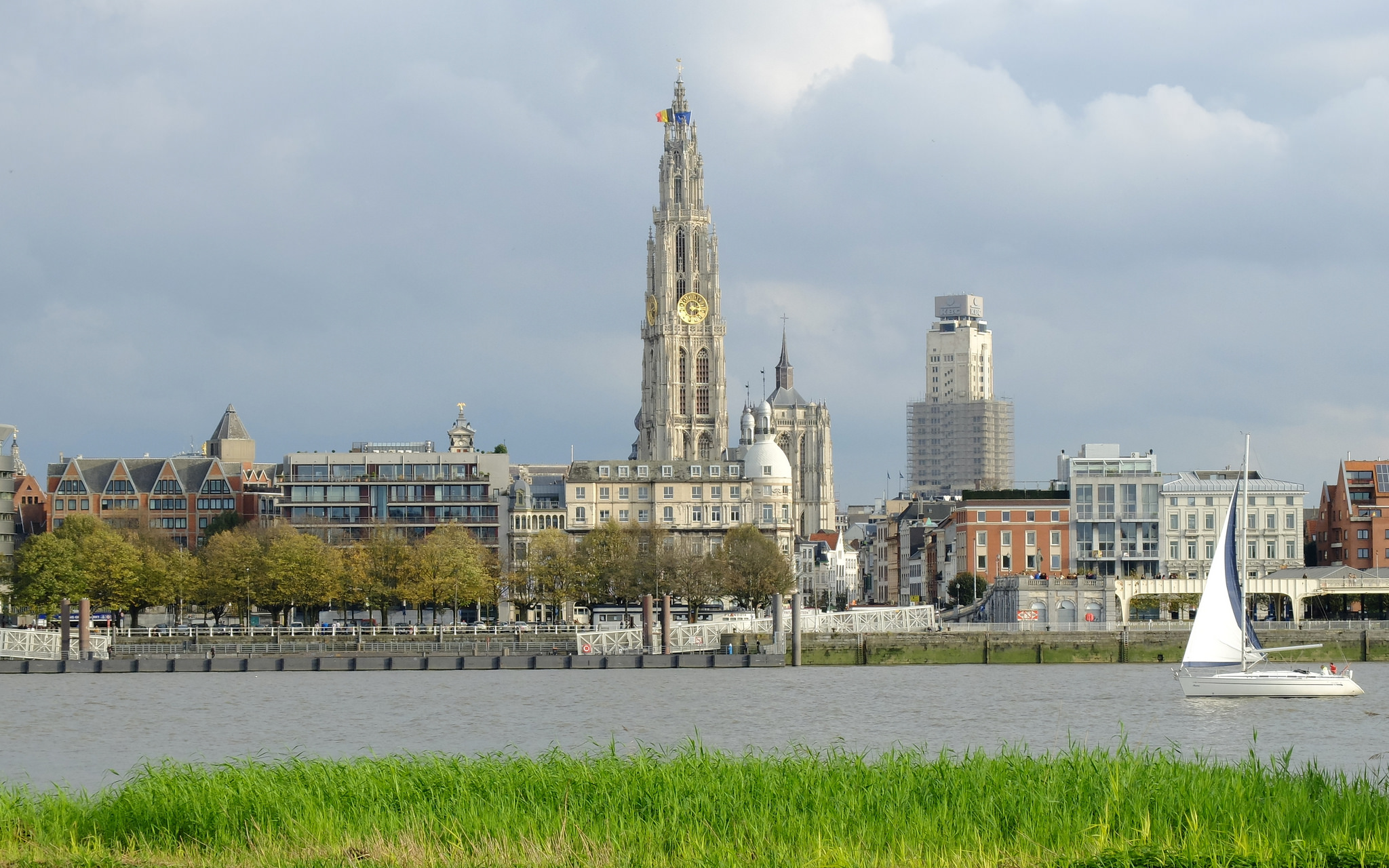 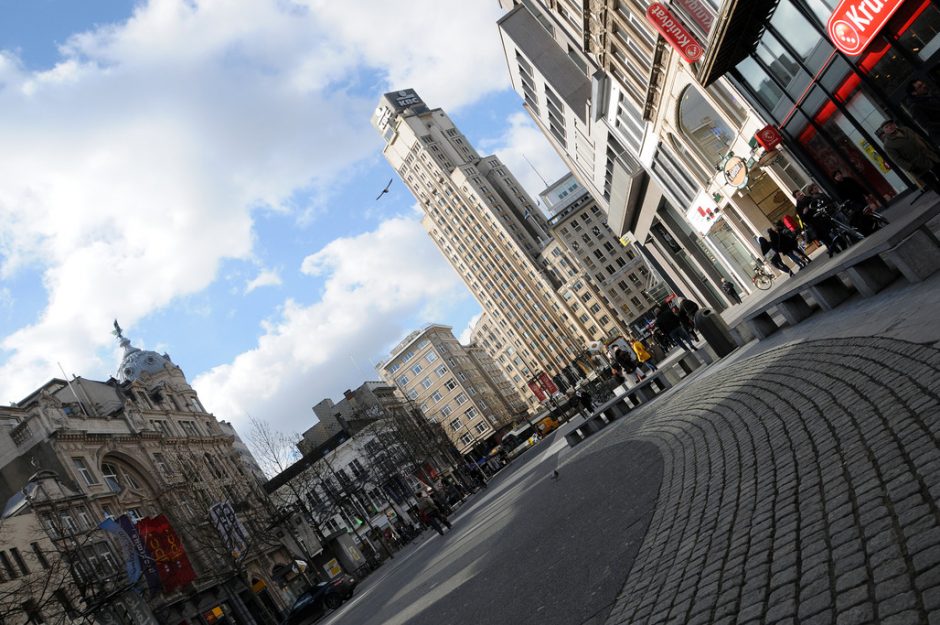 The Meir and Boerentoren | © Jan Crab / courtesy of Visit Antwerp

Originally known as Torengebouw (‘tower building’), the Boerentoren or ‘Farmer’s tower’ stands at the western end of the Meir. At the time of its completion in 1932, it held the title of the tallest skyscraper in Europe. It still remains one of the tallest structures in Antwerp today, second only to the Cathedral of Our Lady, and is well worth a visit to admire its beautiful Art Deco design and detailing.

Just beyond the Eastern end of the Meir you’ll find Antwerp’s City Hall, which was built between 1561 and 1565 and holds a proud place on the UNESCO’s World Heritage List today. It was designed by various artists in quintessential Renaissance style, with both Flemish and Italian influences shining through in its architecture. Its creation was a milestone that went on to inspire the construction of many other government buildings in the Netherlands, and in Northern and Central Europe beyond. Today, guests visiting City Hall can still admire interior decorations dating back to the building’s most recent renovations in the 19th century. Outside, the main façade is hung with 87 different flags: the central flags on the bottom row represent Antwerp, Flanders, Belgium, Europe and the United Nations, while the rest represent nations belonging to the European Union and other countries that have a consulate in Antwerp. 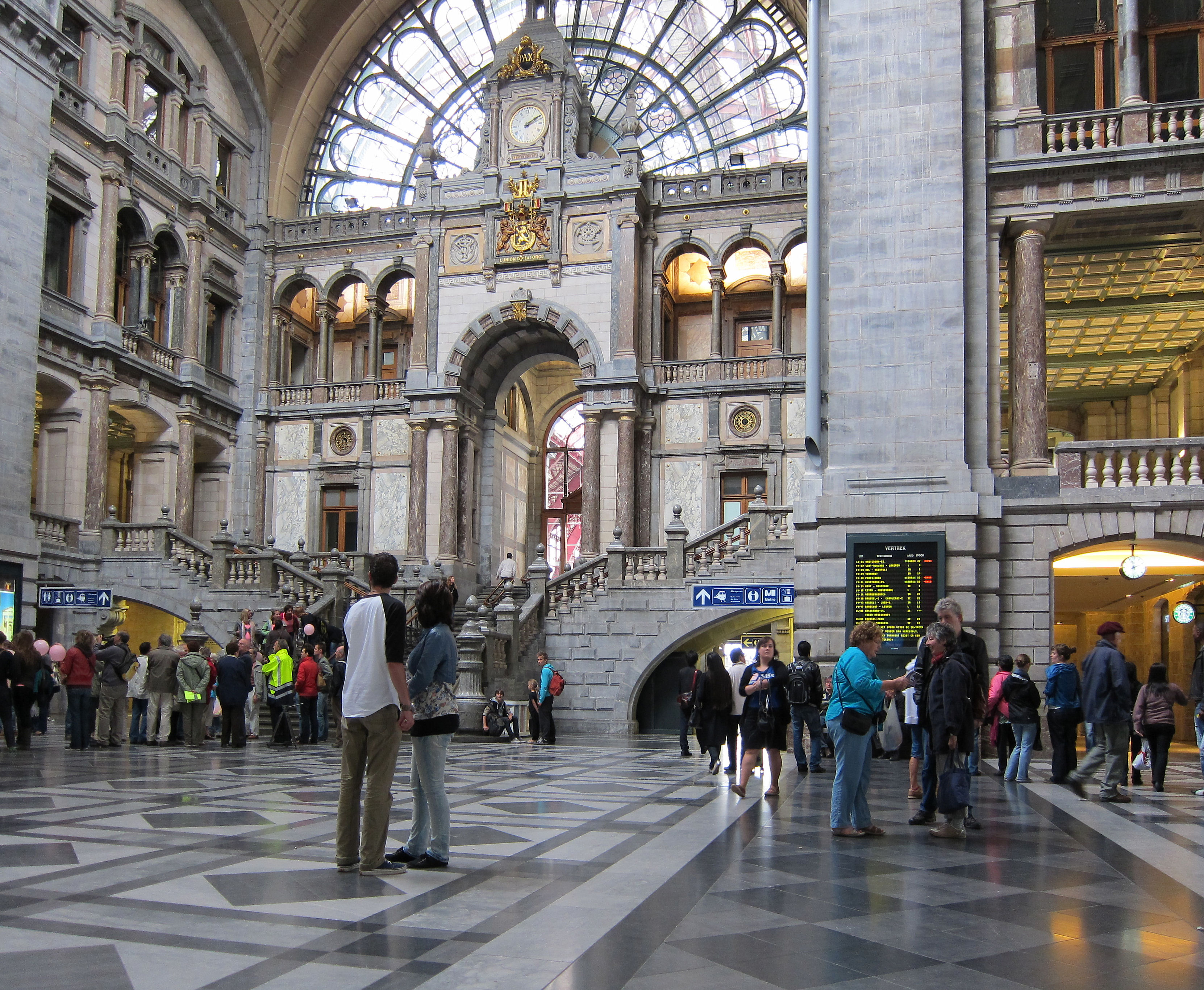 Meanwhile, walking along de Keyserlei you’ll find Antwerpen-Centraal, which serves as Antwerp’s central train station. Built between 1895 and 1905, this is more than just a utilitarian railway stop: the huge dimensions of its magnificent hall, grand architecture, and elaborate ornamentation give the Antwerpen-Centraal a stately grandeur to rival the Royal Residence, and make it one of the finest stations in not only Belgium, but the entire world. Antwerpen-Centraal was recognized as the world’s fourth greatest train station by the American magazine Newsweek in 2009, and the most beautiful in the world by the magazine Mashable in 2014. Even if you’re not traveling by train, you won’t want to miss the splendor of this station.


Cathedral of Our Lady

Not far from City Hall and Central Station you’ll find the Cathedral of Our Lady, another one of Antwerp’s oldest and most famous attractions. Despite being under construction for nearly 200 years, this Gothic Cathedral is still technically considered incomplete today. This nevertheless impressive work-in-progress is officially the tallest building in Antwerp today, with a sky-piercing spire visible from nearly every angle in the city. The Cathedral is also counted among UNESCO’s world heritage sites for its long, somewhat turbulent history: it was built to replace the small chapel of Our Lady in 1352 and it became a cathedral in 1559, although it lost this title from 1801 to 1961 due to a Concordat, and of the two towers that were initially built, only one was ever completed. Inside you’ll find that many important pieces of art are still carefully preserved today, including three large paintings by the master Rubens. 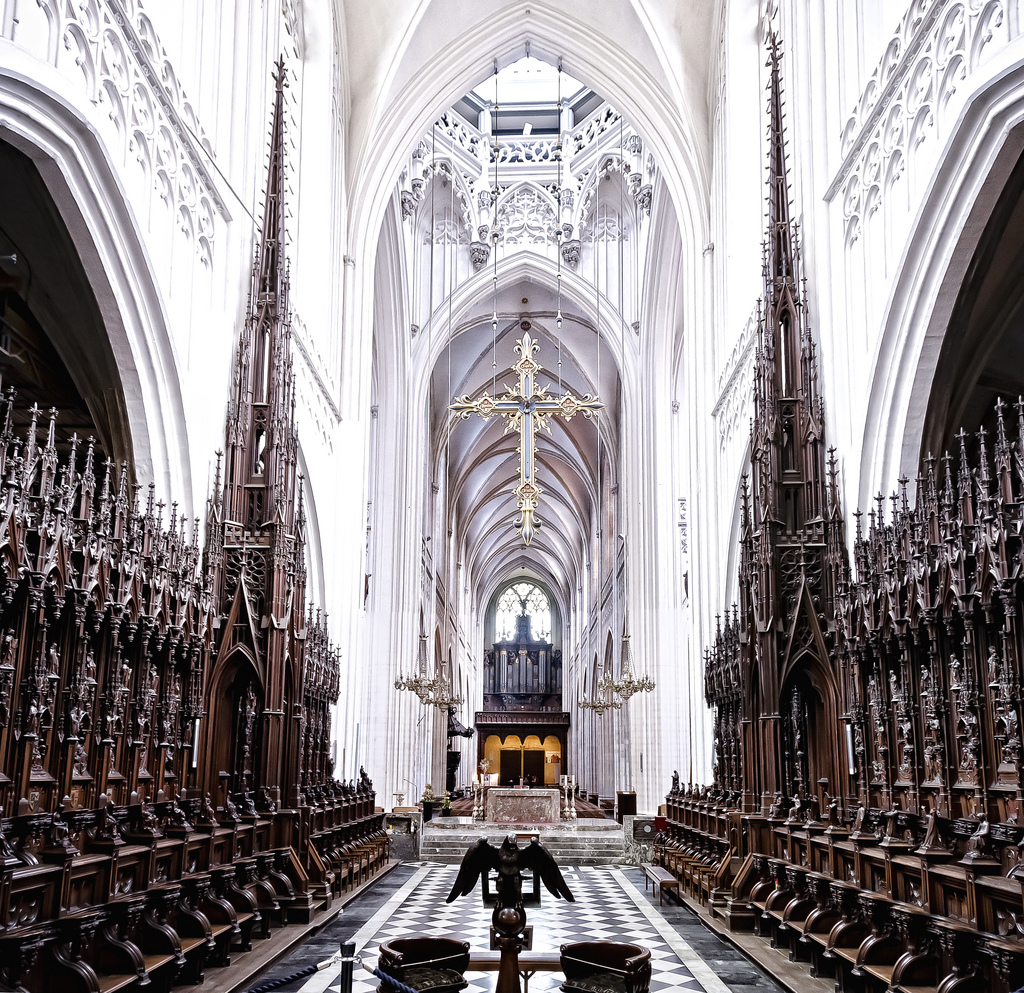 One of the largest churches in Antwerp, Saint James’s church is just a  stone’s throw from the Meir. In the 15th century it was a hospice used by pilgrims traveling to Santiago de Compostela to visit the tomb of the apostle James. Later, a chapel was added to the hospice and then expanded over 175 years of construction into a grand, expansive church. Inside the church you’ll find the tombs and chapels of several wealthy local families, including the tomb of the famous Baroque artist Peter Paul Rubens, who also painted the altarpiece Madonna in the chapel (and whose work appears elsewhere on the Meir, in the Cathedral of Our Lady). Another noteworthy feature is the church’s tower clock, a gorgeous piece of machinery which is one of the oldest working tower clocks in the whole country. 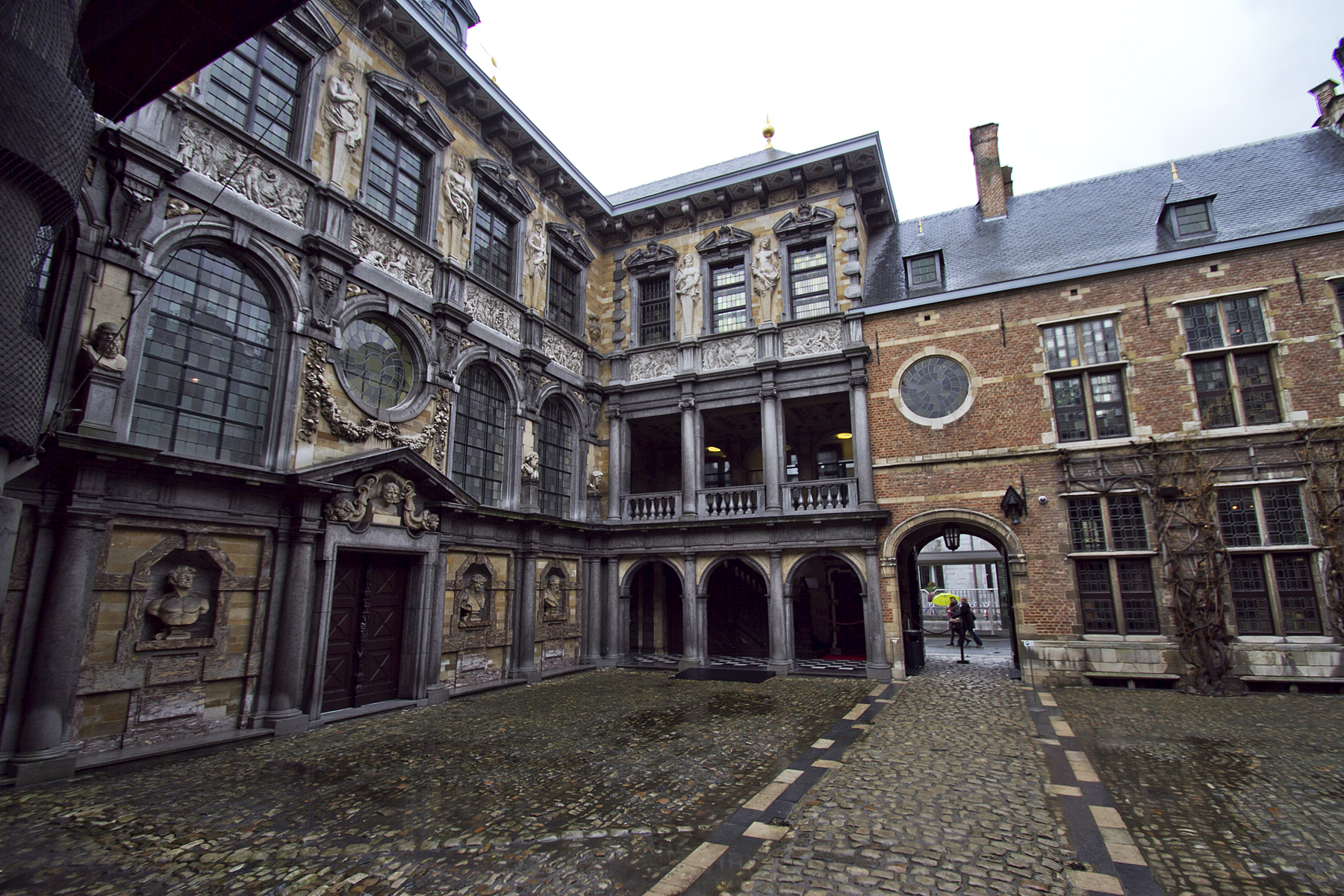 Not far from the Meir is the house where Peter Paul Rubens once lived with his wife, Isabella Brant. They purchased the house in 1610, and the artist decorated it himself taking inspiration from the Classical Antiquity, making the striking décor stand out distinctly among Antwerp’s residences, even today. After Rubens died in 1640, his house remained an attraction to the public until 1946, when it was officially made into a museum to honor its former owner. On your visit to the Rubens House you’ll be able to explore the art room and admire works from the painter’s original art collection, including a striking self-portrait in the dining room and a peek at Ruben’s own authentic painting utensils.