The Tastiest Natural-Wine Bars in Brussels 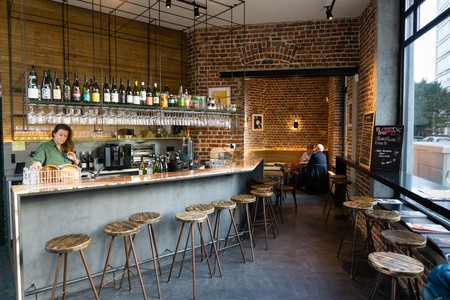 Brussels has fallen in love with natural wine | © Gareth Clark

Brussels is a city better known for its beer. So how did the Belgian capital swap hops for grapes and embrace natural wine, the new toast of oenophiles around the world?

“The definition of natural wine can be a problem,” smiles Baptiste Lardeux, one of the owners of Titulus, the first bar and shop in Brussels to focus solely on natural wine. “Ours is simple: we work just with winemakers who use organic methods in the production of vines (no pesticides, no fungicides), and in the vinification process there’s only a small amount of sulphites added if necessary.”

For the sake of argument, that is the loose definition used here. But we’re not here to talk about what makes wine natural, but how the beer-loving Belgian capital found a new love. When Titulus opened in 2011, there were no others like it here, but over the last couple of years, the number of natural-wine bars in the city has trebled. 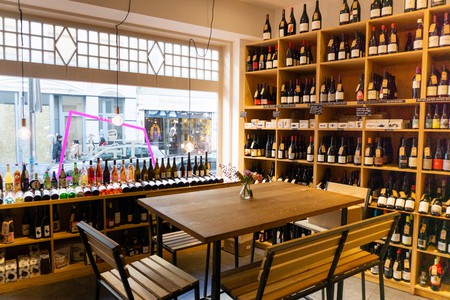 Undoubtedly, the environmental aspect has played some part in the general growth of interest in natural wines, coupled with the commonly held idea that the low level of sulphites (SO2), which both occur naturally in wine and are added to prevent oxidisation, leads to headache-free indulgence. But for Matthieu Vellut, a wine importer and owner of three natural-wine bars in the city, it just made sense here.

“Brussels is a strange capital – part French, part Flemish and filled with EU workers who are neither. People here are more open-minded,” he believes. He also argues that it all started with high-end dining. “It was a legacy of the gastro-revolution abroad of El Bulli and Noma; this filtered into Brussels’s bistronomie restaurants and beyond. Now people don’t even realise they’re drinking natural wine, because they do so everywhere.”

A ready-made audience was there. Yet the usual questions are still asked, say bar owners. Why is it cloudy? (A result of the lack of fining agents.) Why doesn’t it taste like wine? “Well, you can ask for a bordeaux but what we will give you doesn’t taste like what you think a bordeaux is,” smiles Vellut. “It was just grown there.”

Jane Haesen was an enthusiast before she opened natural-wine bar Jane’s in 2017. “Natural wine has its own community,” she says. “You meet the same people everywhere, and when I go to a restaurant that has natural wine, it’s like a recommendation: I know its food will be made the way I like.”

Curiosity, ecology, community… either way, natural wine and Brussels are here to stay. Here are the seven best natural-wine bars the Belgian capital has to offer.

Bar, Wine Bar, Wine, $$$
Facebook
Email
Twitter
Pinterest
Copy link
Share
Map View
The pioneer of Brussels’s natural-wine scene. Titulus’s shop-bar was started by three friends, Baptiste Lardeux, Philippe Mesnier and Vivien Blot (two restaurateurs and a lobbyist), back in 2011. These days, it’s a prolific natural-wine importer, has a vineyard in France’s Loire region and boasts 400 references from 60 winemakers across France (mostly), Spain and Italy. Inside, there is a large café-like space, and free wine tastings run every Saturday (1pm-6pm). There are bargains to be found, too; its own-brand tête red, rosé and white sell for just €8.90 (£7.50), with €8 (£7) added to drink any bottle on-site. As with all its wines, you can taste before you buy.
Lardeux’s pick: “We love the white chenin blanc grape from the Loire Valley, which we use in making the haute-baigneux les chênes, a straight-tasting wine from our vineyard.”
Open In Google Maps
167A Chaussée de Wavre, Ixelles, Bruxelles, 1050, Belgium
+3225129830
Visit Website
Give us feedback 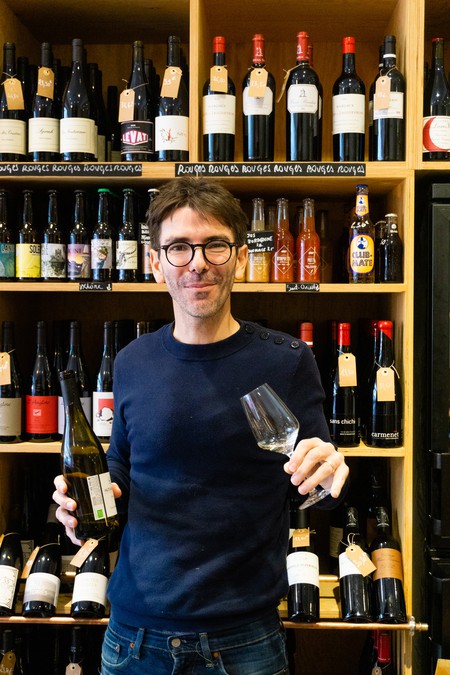 “I can go out drinking natural wine until 3 or 4… but I need to have a bar that goes with that,” explains Jane Haesen. So in 2017, she created one. Inside, Jane’s has the air (and soundtrack) of a good night out, and while there aren’t many wines by the glass (typically six), the selection is eclectic. Curated from the owner’s taste, many bottles come from hard-to-find French and Italian female producers (Arianna Occhipinti, Fanny Sabre, the Foradori sisters). It’s hip but without affectation, and every Thursday, guests from the city’s art scene plot out the night’s playlist as the evening twinkles until the small hours.
Haesen’s pick: “It was very important to me to have wines by Etienne Thiebaud from Jura [in eastern France] – his wine is amazing and what he makes is very difficult to find.”

Matthieu Vellut opened natural-wine bar Tarzan in 2016, before adding neighbouring shop Chez Jane (stocking over 400 wines) shortly afterwards. He works with 50 winemakers across France, Italy, Spain and Georgia, with wines squeezed into three categories: those that are close in taste to non-natural wine; AOC wines, such as those of René Mosse and Catherine and Pierre Breton, which appeal to conventional wine lovers; and lastly, the ‘punk’ wines. “When you drink punk wine, you are not even sure it’s a wine,” he says. Courses are run in the shop, and there’s also a small organic menu and tasting nights with visiting winemakers.
Vellut’s pick: “For a beginner wine, which you’ll not feel too disorientated drinking, try the saltamartí, an easy-to-understand bottle from Els Vinyerons in Catalonia. Everybody loves it.” 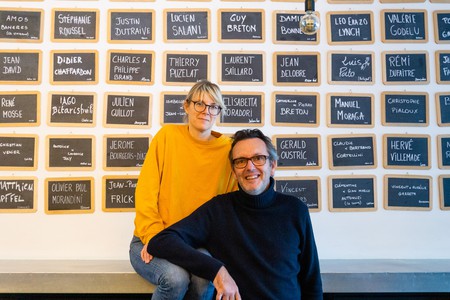 Nestled at the bottom of rue Antoine Dansaert, this friendly natural-wine bar has a neighbourhood vibe. It opened in early 2018, but a local Flemish crowd has quickly adopted it. The interior – all bushy plants, blackboard menus and enamel lamps – sets a knockabout tone to match Danish co-owner Bjarke Olsen’s ‘rock’n’roll’ by-the-glass selection and 120 references. He also brings a dash of home with an organic smørrebrød (open-sandwich) menu cobbled together from his mother’s and grandmother’s recipes (think pickled herring with red beetroot and smoked salmon with gravlax).
Olsen’s pick: “If you want to try a classic-tasting red, start in the Languedoc region of France, which is richer. Try k-nom by Emmanuel Rybinski, who makes a few wines – mainly malbec and merlot – which are amazing.” 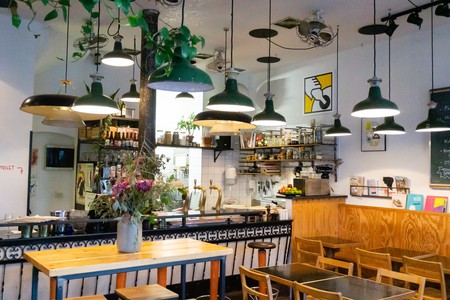 This is another wine shop that’s also a bar. St-Gilles’s popular Rubis was started by the ebullient Pierre Val in 2014, and while its selection isn’t all natural, around 85 percent of its 500 bottles are organic, natural or biodynamic. It’s not by design, either. “I don’t drink wine that stinks,” hoots Val, and the menu (heavy on burgundies) is driven by his taste. You won’t find many naturals in the under-€10 (£8.50) bracket, but there’s always a couple by the glass. Not that there’s a menu; staff ask what you like, then offer a taste of their suggestion as you bag a table on the pavement or in the Aladdin’s cave-like rear.
Val’s pick: “I import wines by Jean-Paul Schmitt, a winemaker in Alsace. His wines are very natural, low in sulphites (just 28mg) and he shows the full analysis, so you know what you’re drinking.” 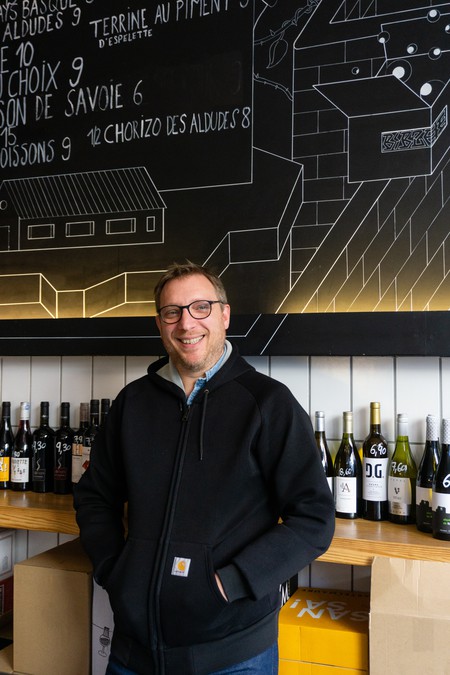 Chez Nabu opened only in August 2019 but is from the same stable as Tarzan, so its wine selection is vast, natural and purposely different. With some 100 references and six-and-six by the glass, it lies out in residential Merode, a few streets west of Cinquantenaire Park. This makes it an island of one. “Around here are only bars hawking Jupiler beer, schools and local businesses,” says bar manager Typhaine Merel. Its custom is steadfastly local so far. Yet with its airy red-brick bar and organic tapas-style menu – all cheese, charcuterie, roast beef and mackerel – it’s a worthy find.
Merel’s pick: “For a good introduction, try Nicholas Réau’s attention chenin méchant, made with a chenin blanc grape from Anjou in the Loire Valley. It’s a really straight, classic wine with a fresh citrus taste.” 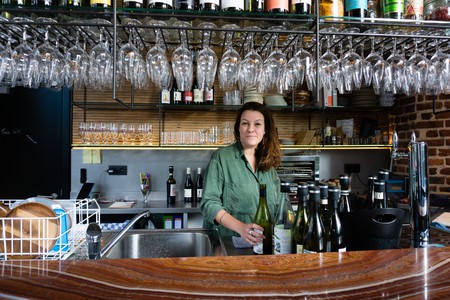 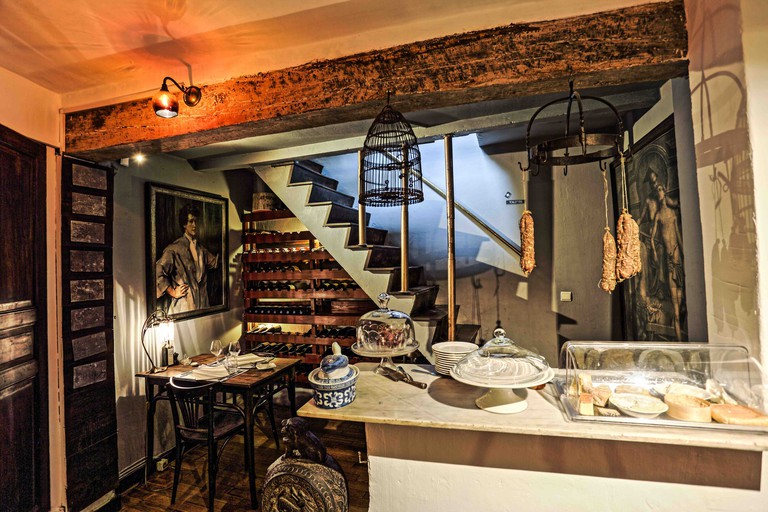 Le Wine Bar des Marolles | Courtesy of Le Wine Bar des Marolles
Le Wine Bar de Marolles is, strictly speaking, a French restaurant, not a bar, albeit one with an admirable focus on local producers. But visit in the warm summer months and it also opens up its second-floor terrace as a drinking area. Owners Vincent Thomaes and Joël Vandenhoudt relocated to rue Haute from nearby Sablon, where their business began life as a wine bar in 2013. Here, they opened an adjacent antique shop that sells a small selection of natural wines. The latter is the focus of the restaurant’s menu of 150 references and 15 wines by the glass, all sourced by sommelier Xavier Meyrueis (“Natural wine is life!”), who only reveals what you’re drinking after you’ve started.
Meyrueis’s pick: “For a full-bodied red, I would pick a nice domaine le murmurium as a good introduction; it’s an organic wine made with a blend of old grenache and syrah. But I won’t tell you what it is when I pour!”
Open In Google Maps
198 Rue Haute, Bruxelles, Bruxelles, 1000, Belgium
+3225036250
Visit Website
Give us feedback 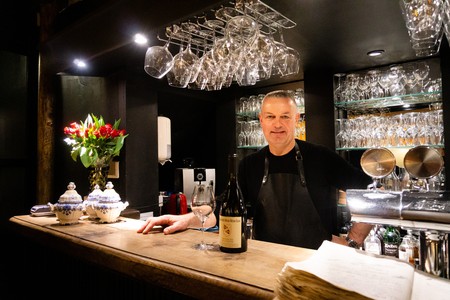