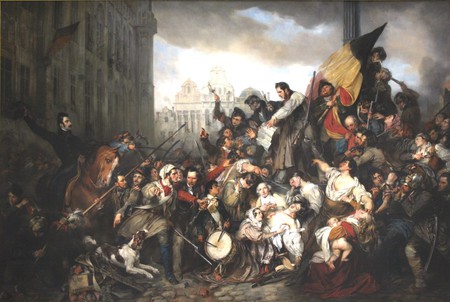 It’s one of the few things that wholeheartedly unites Flemings and Walloons and it is believed to have originated at a bar. As far as national anthems go, the Brabançonne does the Belgians proud.

Written by a French actor

When the Belgian nation was born in 1830-1831 after a bloody revolution against Dutch rule, there was a need for a national image, strengthened further by a flag and an anthem. Both would take their cue from elements already present in the Belgian Revolution.

As the legend is told, it was a September night in 1830 when a group of young freedom fighters made their way over to the café Aigle d’Or on the Rue de la Fourche, a stone’s throw from the iconic Grand Place. As the friends laughed and sung in the salon on the first floor of the bar, a fellow known as Jenneval piped up. He began reciting some verses he had written for a patriotic aria, as was a popular custom for artists at the time. This one gave voice to the gathering’s fiery wish for independence:

Whom a fine passion has aroused,

To your patriotic fervour

Remain under arms, so that naught shall change!

Let us keep the same will,

and we shall see Orange bloom anew

Upon the tree of Liberty.

Much appreciated by the revolutionist crowd gathered at the bar, this was the first of multiple verses of lyrics that would, after several changes, become the eventual Branbançonne. But Jenneval – real name Louis Alexandre Dechet – was no Belgian. The actor and poet, who wore glasses, a fine moustache and is portrayed in lithographies as a man of elegant posture, had come to Brussels several years before to perform at its prestigious City Theatre La Monnaie. 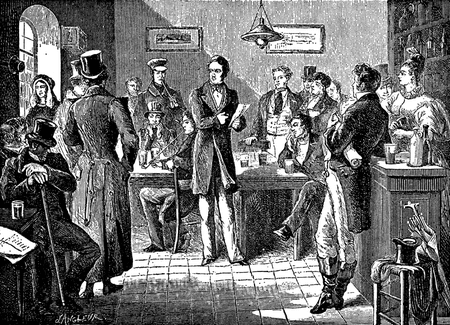 The song of a revolution

Though Jenneval had returned to Paris in 1928 to join the Comédie Française, he swiftly hurried back after hearing of the tensions the July Revolution had also caused in Belgium, where an August 25 performance of La Muette de Portici in honour of Dutch King Willem I’s birthday and the 15th year of his time on the throne riled up the crowd so much it kickstarted the revolution. After the patriotically-themed musical, independence-hungry Belgians spilled out onto the Brussels streets shouting ‘Vive la Liberté!’ Jenneval joined the rebelling army in its fight for Belgian independence and, stirring his fellow fighters’ spirits with eloquent lyrics, earned himself a place in the history books as the auteur of the Brabançonne. The poet would tweak and revise the text three more times to fit the events of the revolution before sadly perishing in a battle against Dutch troops in Lier in October. He had publicly performed the anthem for the very first time on the stage of La Monnaie earlier that month, to a melody composed by violinist François Van Campenhout. 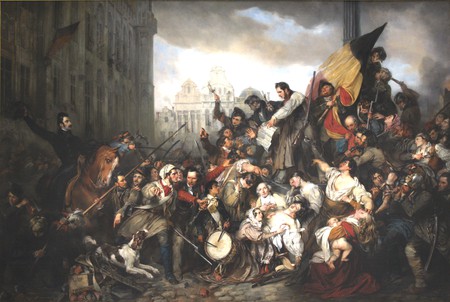 Toning down the insults

The next time the Belgian anthem came up for adaptation was about 30 years later, when Prime Minister Charles Rogier – for understandable diplomatic reasons – significantly weakened the insults at the address of Willem I. The result was the version of the Branbançonne that’s sung before sport matches and significant occasions to this day – at least the fourth verse, which was determined to be the only official song in 1921. A couple of decades later a Dutch and German version were approved besides the French one, and all of them go more or less like this:

Our soul and our hearts are devoted to you!

Accept our strength and the blood in our veins,

Be our goal, in work and struggle.

Always be yourself and serve no other,

Faithful to the word that you may speak boldly,

Faithful to the word that you may speak boldly,

Where to toast independence

The café Aigle d’Or in Brussels is no more, but you can always toast Belgian independence at the female-shaped monument on the Place Surlet de Chokier square. Her name is La Brabançonne, after the anthem and the ancient Belgian region of power, and she proudly carries the nation’s flag. The first paragraphs of the anthem are carved in her pedestal in Belgium’s three languages. 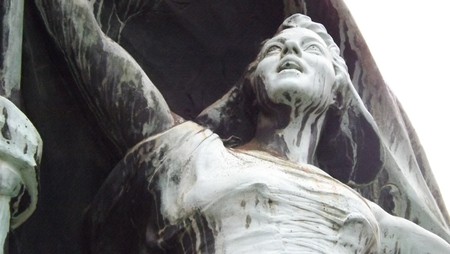