The Official Seven Wonders Of Belgium

Eager to see the best of early Belgian art but not sure where to start? This list of Seven Wonders, drawn up by the governmental institution le Commissariat général au Tourisme (CGT) in 1978 as ‘Year of the Seven Wonders of Belgium,’ has received the official Belgian stamp of approval. Ever since, the list has served as an excellent guide to discover mysterious Belgian masterpieces along with many remaining unknown to the public at large. 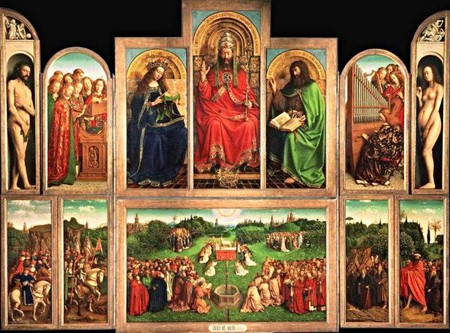 This internationally recognized wonder, also called the Adoration of the Mystic Lamb, symbolizes pretension at its very worst. In order to outshine all other endowers to St. John’s in Ghent, the childless couple Jodocus Vijd and Lysbette Borluut commissioned Hubert van Eyck to create a masterful panel painting as a legacy to their pompous and petty existence. Not only do these two rich bourgeoisie landholders appear on the outward wings of the altarpiece, in order to tie their names to Hubert van Eyck’s, they also had him interred in their chapel, where priests would celebrate mass to ensure their salvation in the afterlife. They must have needed it.

Indeed, down through the ages, this work seems to bring out the very worst in people. Visitors have always had to a pay a fee, even before the Vijds croaked, with the church pocketing the proceeds. Even more strikingly, at 13 cases of larceny, the altarpiece is the most stolen work in all of history — most recently hidden by the Nazis in an Austrian salt mine once the Reich’s destruction became imminent. With a few scuffs and scrapes following this unpleasant experience, the altarpiece lives on, waiting to be stolen for the 14th time.

The Ghent Altarpiece is currently undergoing restoration in the Museum Schone Kunsten (MSK), where it can still be seen/swiped. 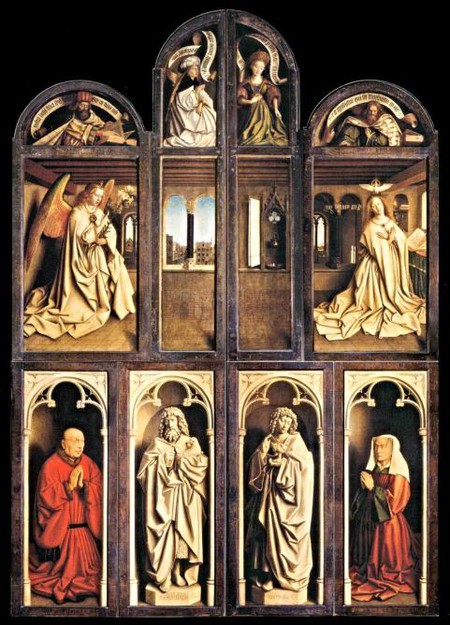 The Treasure of Oignies (13th century)

Jacques de Vitry, a one-time member of a religious community living in Oignies (in present-day Belgium), took up arms during the Fifth Crusade and ended up sending back a vast collection of relics: several fragments from the True Cross, one of Saint Andrew’s teeth, milk from the Virgin Mary, Saint Peter’s side, one of Saint James’s feet, one of Saint Blaise’s, a container of oil collected from the tomb of Saint Nicolas, as well as relics from Saint Marguerite and Saint Hubert. Faced with a dearth of reliquaries to protect this treasure trove of relics from wear and tear, Hugo of Oignies took it upon himself to learn metalworking and in doing so found his voice: ‘Others sing Christ with their voices. Hugo sings him through his metalworking,’ he adorably inscribed into his Gospel Book.

His originality is twofold: technical and conceptual. Using the technique of stamping, he obtained intricate patterns, such as the elaborate leafwork decorating the outer edges of his Gospel Book’s metallic cover. Conceptually, he devised some pretty odd reliquaries; for example, Hugo decided to deposit the Virgin’s milk in an uncannily lifelike looking dove, meant to symbolize the purity and virginity of Mary. To see it and the rest of this medieval cabinet of curiosities, visit the Musée des Arts Ancien du Namurois in Namur. 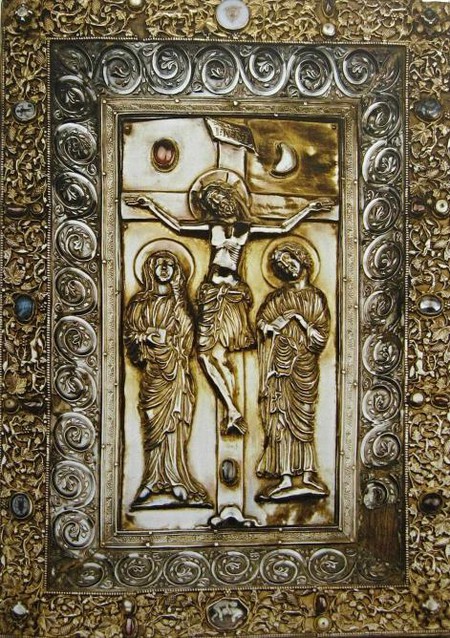 The Gospel Book of Hugo of Oignies | © Goodness Shamrock/WikiCommons

The Reliquary Shrine of Our Lady (early 13th century)

This deliciously ornate reliquary shrine marks the radicalism of the budding early 13th century Gothic style. Up until Nicolas of Verdun, the constructor of this lavish piece, reliquary makers adhered to Romanesque conventions, constructing shrines to look like mini-caskets, thereby emphasizing their function as containers for the corporal remains of saints. Nicolas de Verdun focused instead on his shrines’ form, augmenting the verticality of the shape, slapping on practically all forms of ornamentation available at the time, and employing three-dimensional high-relief rather than flat Romanesque bas-relief.

One of his most stunning works, the Our Lady Shrine, was built to house a mishmash of relics, including the remains of the Virgin, which had been used to ward off a particularly nasty outbreak of Saint Anthony’s Fire in 1090. The individual scenes of the shrine, therefore, center around the life of Mary and her son Jesus. Her shrine can be visited in Tournai Cathedral, a UNESCO heritage site, or, even more spectacularly, every second Sunday of September in la Grande procession, which was perpetuated in memory of the Virgin’s miraculous intervention in 1090.

The Reliquary Shrine of Saint Ursula (1489)

In comparison with the metal-encased Our Lady Shrine, this one features painted panels, which testifies to changes in monetary thought. Whereas the community of Tournai had reserved its best metal for the shrine, the Bruges bourgeoisie of the late 15th century believed that metal was meant to circulate and multiply, not be wasted on a shrine.

The Saint Ursula Shrine is no less beautiful. The bow-arched panels recount the legend of Saint Ursula; endeavoring to preserve her virginity, she tricked her betrothed into letting her go on the medieval version of a European road trip before being slaughtered, along with 11,000 virgins, by the Huns in Cologne. You can follow the sequence of events in the Hans Memling Museum in Bruges. 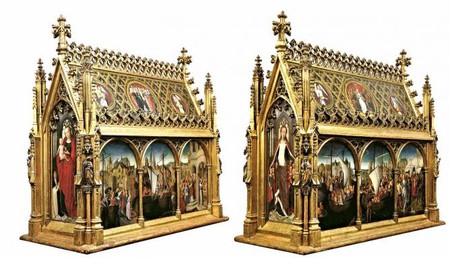 Landscape with the Fall of Icarus (1560s)

According to Ovid’s version of the Icarus, Daedalus ‘altered the natural order of things’ by inventing makeshift wings out of reeds and beeswax so that he and his son Icarus could escape from King Minos’s labyrinth. As Icarus and Daedalus whiz by, an angler, a ploughman, and a shepherd stare at them in awe and disbelief ‘believing them to be gods able to travel the sky.’ Sure enough, Icarus ‘drawn by desire for the heavens’ approaches too closely to the sun, causing the wax to melt and Icarus to plummet to his death.

In this painting. the workers have already returned to their toil, paying no further heed to Icarus, as he flails in the water following his fateful flight. The composition itself — a central X and an inverted V — reinforces this theme since Icarus falls outside of both zones. The beholder’s eye is first drawn to the largest central form in the painting, the ploughman, then to the shepherd, and thereupon to the mast of the vessel. Running perpendicular to this line, forming the second line of the X is the landmass. As for the inverted V, the line goes from the laborer to the sun in the horizon back to the aforementioned vessel. Left out of the main composition elements, Icarus proves almost as difficult to find as Waldo of ‘Where’s Waldo?’ fame.

The message: Icarus’s existence represents a blip in the lives of workers who have to toil day in and day out to ensure their survival.

This work can be visited in the Musée Oldmasters Museum in Brussels. 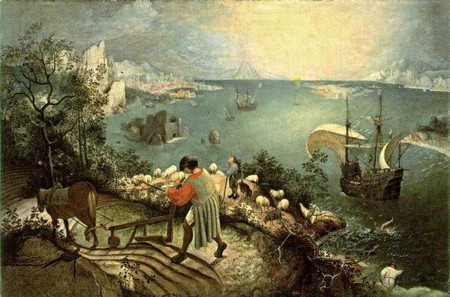 Pieter Breugel The Elder, Landscape with the Fall of Icarus | © Coldcreation/WikiCommons

Whereas the subject of this work has been, no pun intended, done to death, this painting surprises through its sheer size (13.8 feet x 10.8 feet, 420.5 centimeters × 320 centimeters). No photo, therefore, does justice to its ability to dwarf the viewer, to overtake one’s peripheral vision. Alongside its gargantuan size, other hallmarks of the Baroque period are present: twisting and turning forms to communicate tension, Jesus and his crowd of followers arranged in a diagonal line to create compositional dynamism, and the stark contrast of light and dark shades (known as chiaroscuro) to give a sense of three-dimensionality. If you want to get an authentic Baroque experience, visit the Cathedral of Our Lady in Antwerp. 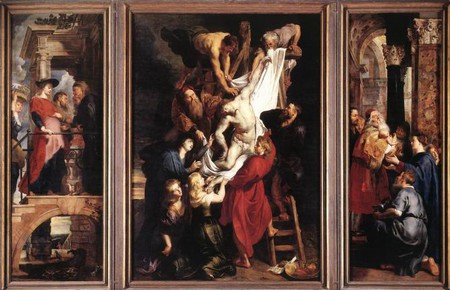 Peter Paul Rubens, The Descent from the Cross | © Spinster/WikiCommons

Our last wonder of Belgium takes us back to the Collegiate Church of Saint Bartholomew in Liège, where the exquisite Baptismal Font of Liège is on full display. Often cited as a stellar example, if not the culmination, of Mosan art, it may have been, in fact, produced elsewhere than in an atelier alongside the river Meuse.

Whatever its provenance, the font’s programmatic five-scene ‘mini-comic’ on baptism delights the viewer. The first two panels show John the Baptist preaching and baptizing early converts with all characters represented in profile, presaging the baptism of Jesus who, alongside the Father and the Holy Ghost, stares directly at the beholder in the third panel, before cutting back to a side view of two later baptisms: that of the philosopher Craton as well as of Cornelius the Centurion, representing baptism’s power over the spiritual and the profane, respectively. As with many of the other wonders on this list, it is safe to say that this baptismal font is a powerhouse of art and history, too often overlooked by the general public. 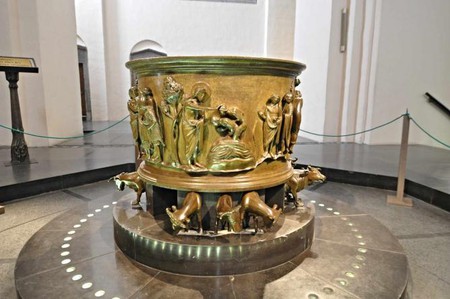 There they are, the Seven Wonders of Belgium. Conspicuously, all are portable objects requiring a nominal museum or church entry fee; after all, the CGT does want to make a buck off of tourists. This governmental organization has also been accused of having been too ‘politically correct,’ identifying three objects in each of the two large regions, Wallonia and Flanders, and one in Brussels. Nonetheless, not visiting the Seven Wonders of Belgium would mean missing out on the very best of early Belgian art.