The Most Romantic Spots In Bruges

With a postcard-perfect medieval look, pairs of swans drifting around on meandering canals, and a body of water literally called the ‘Lake of Love’, you’d be hard-pressed to name a city more inherently romantic than Bruges. So why fight it? Embrace the hype and go all out with this lovey-dovey list of the city’s most charmingly romantic highlights.

Take a stroll over the Minnewater Bridge with your partner and you’ll forever be in love. At least according to a widespread folkloric belief that was sparked by the legend of star-crossed lovers Mina and Stromberg. Forced by her father to marry another man while her warrior love was off to battle, young Mina ran off into the woods and eventually died of exhaustion. Stromberg honored her by building a dam to hold back the stream, burying her and then letting the water flow over her grave – hence the ‘Lake of Love’ and accompanying bridge. 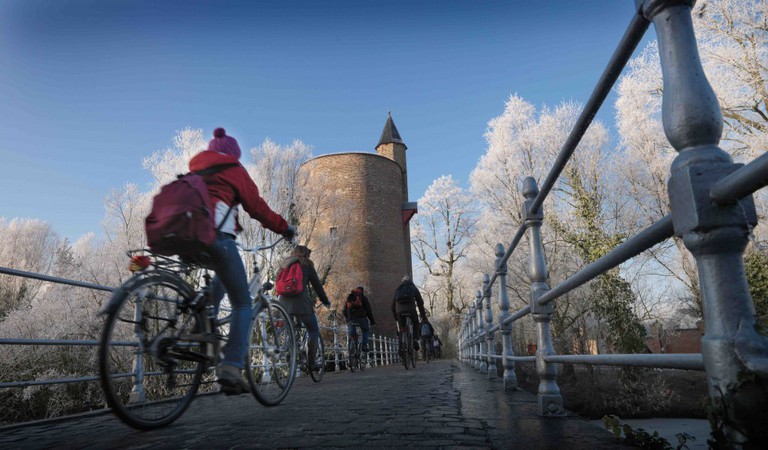 Follow up the walk with a picnic at the tranquil Minnewater Park. Plop down between the colorful flowerbeds or on one of the benches overlooking the lake and enjoy nature and Bruges’ signature legions of swans. Another prime picnic spot is Hof De Jonghe, a hidden green gem in the middle of the city center where sheep merrily graze underneath apple trees during spring. 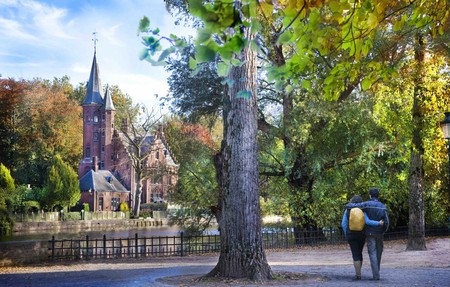 On rainy days when long walks aren’t in the cards, a long brunch at The Gulliver Tree is there to banish the gloom. Make yourself at home in their living room-style lounge and sip your tea in front of the fireplace. Another charming coffee house to hide out in is the snug Vero Caffè, run by mother-daughter team Veronique and Chloë, queens of the homemade pastry.

If you think Bruges is romantic by day, wait until the sun starts to set and take a saunter along the Gouden-Handrei, the Sint-Annarei and the Groenerei. Free of tourist masses but equally picturesque, these cobbled streets along the canals have a knack for making you feel like you’re the only two people in this magnificent medieval world.

This exceptionally slim alley has a history of rendez-vous, though not of the overt kind. The Stoofstraat (or ‘Stove Street’) used to be home to a notorious bathhouse for the hot and heavy elite. Wealthy men not only came here to have a haircut and clean themselves up, but to enjoy a romp with local prostitutes as well. In a way it was Bruges’ very own red light district until the Church shut down the fun. Due to obvious reasons these kind of places were located in discreet, narrow alleys such as this one. In some places the walls are so close to each other you can spread out your arms and touch both sides.

One of the most picturesque spots in a town bursting with them is the Bonifacius Bridge. Nestled in between two other charming Bruges highlights – the regal Gruuthuse palace with its stunning courtyard and the quaint, noble Arentshof – it has even surpassed the Minnewater Bridge to earn its nickname ‘the Bridge of Love’. A built-in bench on the inside makes for the perfect seat to watch the boats and swans float by. Don’t imagine the medieval romances that must have bloomed here just yet though. Despite its ancient look the Bonifacius Bridge is only a little over a century old, a veritable youngster in Bruges terms.
Open In Google Maps
6 Groeninge, Brugge, Vlaanderen, 8000, Belgium
+3250444646
Visit Website
Give us feedback

Ignore the fact that this intimate establishment got its name from a Stephen King television series and you’ve wound up in a setting that almost begs one to pop the question. With all dark wood paneling, candlelight everywhere and dozens of red roses dangling from the ceiling, owner Kris might as well be Cupid in disguise. Cleverly combining his snug space with a nice selection of Trappist beers, he’s had multiple newly engaged couples walk out with big grins on their faces.

The ‘Princely Beguinage Ten Wijngaarde’ is an especially romantic attraction during springtime thanks to the many daffodils blooming in its peaceful garden, but it’s also an early vestige of medieval feminism. The pious ladies who inhabited the ‘begijnhof’ since 1245 were emancipated women who lived productive lives caring for the poor. Today only eight Sisters of the Order of Saint Benedict remain in the small, white-plastered buildings to welcome you to their historic household and museum every day until the gates close at 6:30pm.

When planning a romantic night on the town in Bruges you’ll want to check if there’s anything playing at ‘t Zwart Huis. There’s nothing like a little blues to tug at the heartstrings, and a live gig at this atmospheric jazz den should melt even the most skeptic of souls. Another great option for smooth concerts is cellar bar Comptoir des Arts.