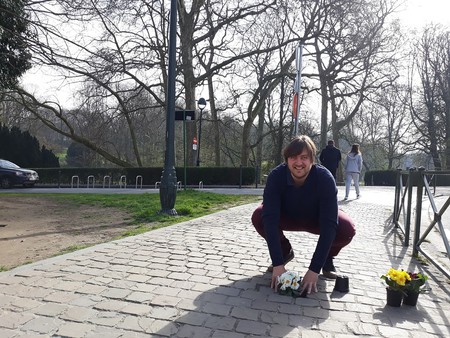 Fed up with the poor state of Brussels’ city roads, one Belgian man has taken matters into his own hands and is planting flowers in potholes. He hopes his guerrilla gardening will prompt the government to address the issue.

Anton Schuurmans got the idea from an online video a friend showed him over breakfast a few weeks ago, he tells Culture Trip. ‘I don’t remember exactly where it was, it might have been Colombia, but someone was filling potholes in the roads with cactus-like shrubs. I recently bought an electric bike and while pedalling around the city, I noticed how many potholes there are on Brussels’ roads. They can be quite dangerous, especially when you’re going downhill on a bike. That video made me want to fill them with soil and flowers’.

Why Belgian roads are so poorly maintained is a mystery to Schuurmans. ‘It’s not just Brussels’, he explains. ‘Driving from Belgium to the Netherlands, one thing you immediately notice is how much better the roads over there are. I don’t know why Belgian roads are so bad, but there always seems to be many potholes’. Schuurmans made a video of the first time he stepped out to fill potholes with flowers.

The amateur horticulturalist has garnered a fair bit of attention with his ‘flowerpotholes’ the past few weeks. The response he gets when he is out filling potholes has been overwhelmingly positive. ‘Some people take pictures and ask me what I am doing. They always agree with me about the poor state of the roads and that something needs to be done’.

Several political parties have also expressed support for Schuurmans’ flowerpotholes, but much to his surprise, he hasn’t heard from any of the authorities in charge of road maintenance. ‘Two of the potholes I planted in got fixed, but I only found that out by accident, none of the relevant authorities have been in touch to discuss the pothole issue’. 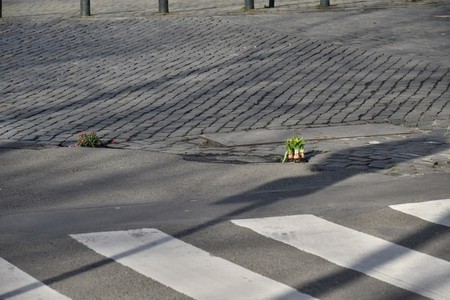 The guerrilla gardener has been caught in the act by police twice but has so far managed to escape a fine. ‘Both times, police officers asked me to remove the plants, which I did, but they also expressed sympathy for my action. They have my details now though, so I think I might get a fine if I get caught again’.

Schuurmans makes sure he only plants in holes on roads that are not too busy. ‘Safety first, I don’t want to cause any accidents’. The flowers Schuurmans plants are usually removed fairly quickly, he suspects by the municipal street cleaners. ‘I don’t mind’, he emphasises, ‘they are just doing their job. Busses and cars appear to be dodging the plants, I think that is quite nice’. His new hobby has already cost Schuurmans around 300 euros, but he feels it is money well spent. ‘I make the world look a little nicer, if only for a short amount of time’.

With his impromptu action, Schuurmans hopes to inspire others to start planting flowers in potholes. ‘When the weather is good, I find it to be an excellent way to spend your Saturday or Sunday afternoon. Get the kids involved, it is much cheaper than taking them to an amusement park’.