The Koekelberg Basilica: The Beauty of Brussels 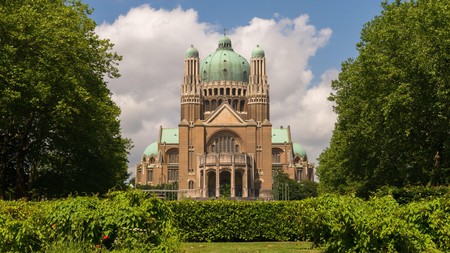 In the 19th century, inspired by the Sorbonne district in Paris, King Leopold II wanted to turn Koekelberg into a “royal district”. This district, of course, needed its own religious building. Due to the lack of support from the Belgian people, he gave up on the project at that time, but he still wanted to see his Basilica become a reality.

In the 20th century, Leopold II finally laid down the first stone of the Basilica of the Sacred Heart. By the time the Basilica was finished 64 years later, the project had been in the hands of three different architects, survived two world wars and changed style drastically.

While architect Pierre Langerock wanted it to become a neo-Gothic church, the plans were altered after his death due to a lack of finances. Architect Albert Van Huffel made it an Art Deco-style building instead. After Van Huffel passed away, the project was left in the hands of his colleague Paul Rome. In 1969, the large green dome was set on top of the tower, and the Basilica was declared finished.

The museums in the Basilica showcase religion by looking back at the past and sketching out the future. The Black Sisters Museum and the Modern Religious Art Museum both have an extensive and fascinating collection that inspires reflection on religion, its goals and its representation.

But while the Basilica of the Sacred Heart is a religious building that hosts Catholic celebrations, it also has several attractions that have little to nothing to do with religion, such as exhibitions, a theatre and a restaurant. The building also has vacant rooms that you can rent for events. And besides all this, the Basilica is a well-loved Art Deco monument.

The best of Belgium and the world

Not only is the Basilica the third biggest cathedral in Belgium, but it also ranks as one of the world’s largest churches and is the largest Art Deco-style building in the world. While it was nearly a century in the making, the Basilica is now a part of the cultural life of Brussels.