The IJzertoren: A Symbolic Guardian Of Peace In Belgium

While it’s no secret individuals can see the traces of World War I within various parts of Belgium, most tend to initially think of Ypres, a city where there are undoubtedly many memorials and museums documenting Belgium’s stake in the conflict. However, nestled in the West Flanders region lies another significant reminder that peace should be upheld by honoring the victims and soldiers of World War I.

Rumblings of World War I

With the outbreak of World War I, Germany began to set its sights on conquering the West and began to move its forces to attack France. With the Schlieffen Plan, German troops planned to invade certain points of Belgium for access to key defensive posts for the French military. Although Belgium did not initially allow the troops to cross through the country, the German forces answered with a declaration of war on Belgium and invaded the country at the beginning of August. This was followed by a series of battles between the Belgians, along with Allied comrades, to secure key territory from the Germans.

One of the heated battles between the Belgian and German troops occurred when the German military attempted to cross Belgium through the Southern province of Arlon, with the intention to head to the North Sea to access key French ports. The confrontation between the troops manifested near the towns of Nieuwpoort and Diksmuide, and the confrontation became known as the Battle of the Yser. Beginning in October 1914, the battles lasted throughout the course of two months and ended with Allied troops narrowly defeating Germany’s advances for territory. This marked a significant end for the ‘Race to the Sea,’ but at a cost as Belgium suffered many casualties from the battles. 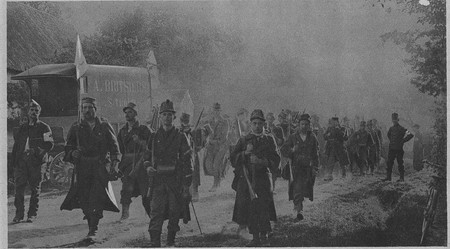 Regional identity and the war

Among the Belgian soldiers that fought in the battles of World War I, a large percentage were Dutch speaking, or specifically, residents from the areas of Flanders (northern part of Belgium) where a dialect of Dutch was spoken, known as Flemish. During and after World War I, the recognition to honor this linguistic community of Belgians grew strong, as many of the soldiers that fought in the Battle of the Yser were, in fact, Flemish. These soldiers in particular, and their comrades, were to be commemorated through a memorial known as the Ijzertoren (Yser Tower). Situated in Kaaskerke, a small town within Diksmuide, the tower was placed in an area where some of the Flemish soldiers died and would come to serve as a peace memorial.

However, peace was short-lived as World War II began, and Belgium once again found itself plunged into devastation. After the Second World War ended, the original Ijzertoren, which was able to withstand the battles, was blown up in 1946. Intent on maintaining a memorial for the fallen soldiers, a new project led by Architect Robert Van Averbeke began in July 1952. Using the remnants of the old tower to build the Paxpoort (Gate of Peace), the new Ijzertoren’s construction lasted 13 years, and the tower was officially inaugurated in 1965. 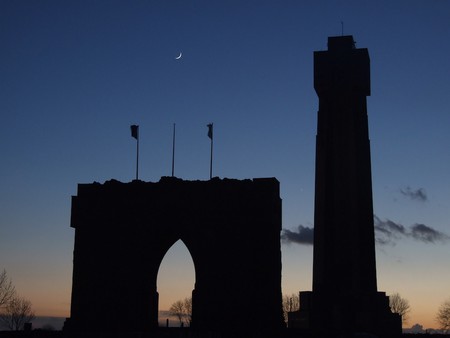 Measuring at 84 meters (275 feet), the Ijzertoren Tower is a significant monument in Belgium from a historical and cultural perspective. The memorial itself is dedicated to those soldiers that sacrificed their lives in battle – but it has also come to be seen as a symbolic reminder that peace should prevail, as detailed through the inscription on the tower, ‘Nooit meer Oorlog’ (No More War), written in four different languages to represent all Allied troops on the front line in Flanders.

While recognizing all soldiers involved in the war effort, there is also the intention to display the pride for the Flemish community as well, by including the abbreviations ‘AVV-VVK,’ meaning ‘Alles Voor Vlaanderen, Vlaanderen voor Kristus,’ (All for Flanders-Flanders for Christ). 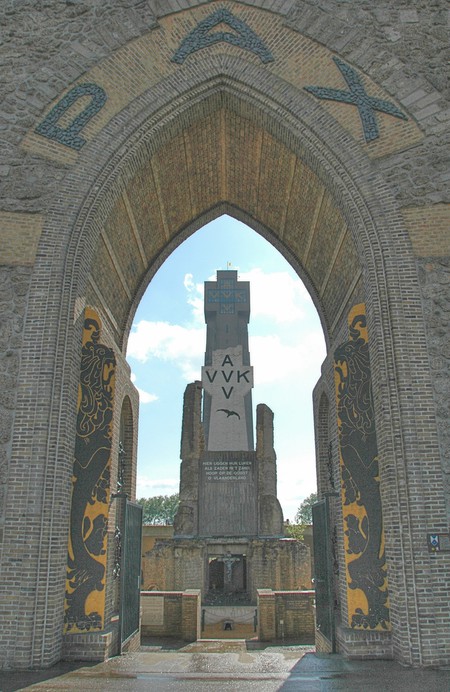 The museum and its ceremonies

The Ijzertoren also houses its own museum composed of temporary and permanent exhibitions about the history of the region, the Battle of Yser and individuals involved in the war effort, delivering an underlying message of peace by honoring military and civilian victims. 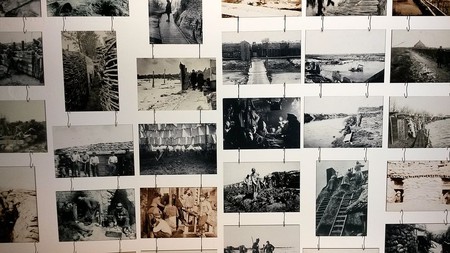 The Yser Museum also hosts other initiatives, including the Yser Pilgrimage – a ceremony of remembrance for the fallen soldiers of World War I – while extending its focus to incorporate the greater Belgian and international communities. This message of tolerance continues to reverberate through the memorial’s efforts to stand as a message for peace that certainly extends beyond borders. 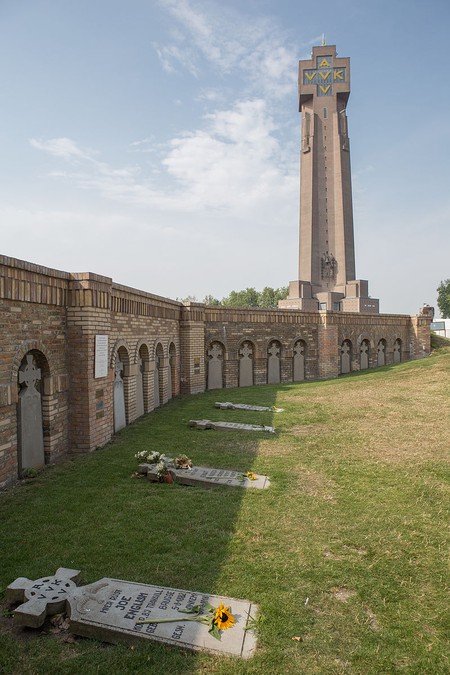 IJzertoren | WikiCommons
Give us feedback