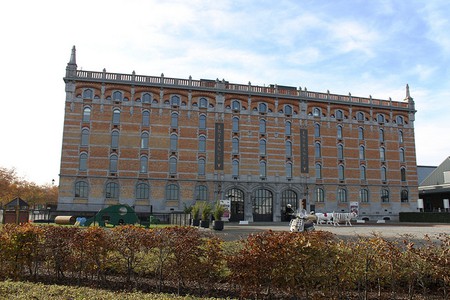 The historical Tour & Taxis site on the Brussels Canal is the beating heart of the city’s art scene. Standing tall since the 19th century, the huge former industrial site showcases world-renowned cultural events.

A former international postal service, train station and shipping yard, the Tour & Taxis site has lived many lives. Developed by the German von Thurn und Tassis family (in French really only pronounceable as Tour et Taxis) – European postmaster royalty in those days – the original swampy piece of land rapidly evolved into the spine of Brussels’ economy. And while the grounds haven’t served any transit purposes since the ’60s, the grand industrial decor makes for a great backdrop to the capital’s biggest cultural events.

Ongoing renovation works since 2001 have made sure not to disturb the old industrial charm pervading the place. The former railway station still has old tracks running through it, and the mammoth halls known as the Sheds have kept their original metallic framework and saw-tooth ceiling. And even though the four-storey-high, glass-roofed Royal Depot has become a thing of beauty as a multipurpose hub for shopping, dining and general relaxation, Tour & Taxis remains mostly known as a venue for reputable fairs and festivals.

The world-class Couleur Café Festival, one of the most diverse culinary and musical experiences in the country, has become a permanent summer fixture. The grand scales of the Old Maritime Station and the Sheds have proven perfect for big springtime events such as Art Brussels, Brussels Design Market and the BIFFF film festival. During the winter, the Brussels Book Fair, the Affordable Art Fair and the prestigious BRAFA (Brussels Antiques and Arts Fair) warm up the cold weekends.

Over the centuries, what started as a postal service has become an urban cultural nucleus, attracting the best and biggest happenings all year-round.