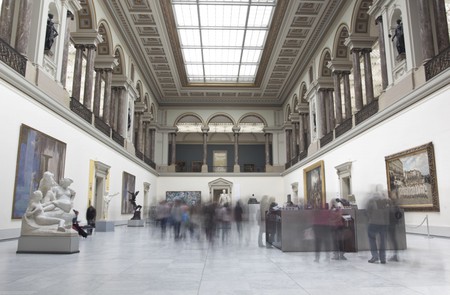 With four buildings dotted throughout the city and a collection of more than 20,000 paintings, drawings and sculptures, the Royal Museums of Fine Arts of Belgium certainly have their bases covered. Founded more than two centuries ago, the museum group – housing everything from the Flemish Primitives to the biggest Magritte collection in the world – continues to make a name for itself on the international scene, with a fierce commitment to constant growth and innovation.

With six separate museums, four splendid Brussels locations and the biggest art collection in all of the land, discovering all the nooks and crannies of the Royal Museums of Fine Arts of Belgium (RMFAB) might well take a weekend. However, true history buffs looking for an extensive overview of Belgian fine art will find no place better suited to their needs.

The Old Masters Museum, founded by Napoleon Bonaparte in 1801, boasts important works by the painter gods of the Lower Countries, such as Memling, Van Dyck, Bosch and Bruegel the Elder. Inside the impressive Peter Paul Rubens room, the characters of the artist’s larger-than-life paintings look down upon their tiny spectators.

In the same regal setting as the Old Masters – a beautiful pillared building on the corner of Place Royale and the Rue de la Régence – you’ll find the Modern Museum and Fin-de-Siècle Museum. The latter’s opening in 2013 delighted art nouveau fans, as it’s brimming with objects in the style that originated and bloomed in the capital at the end of the 19th century.

Sitting right next to the main building and facing the constitutional court is the almost equally majestic Magritte Museum, one of three in the collective dedicated to individual giants of Belgian culture. And while the art houses in the Ixelles neighbourhood pay tribute to the Romantic Antoine Wiertz and the Realist Constantin Meunier in many thoughtful ways, the ever-evolving, expanding character of the Royal Museums is best exemplified by this new temple of surrealism. With some 200 original René Magritte works on display, the museum has proven a magnet to art lovers from all around the globe since it opened its doors in 2009.