The History of Belgium’s Royal Military Museum in One Minute 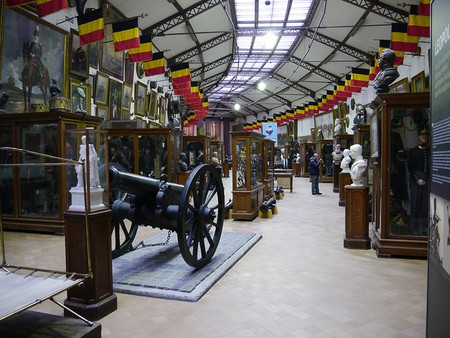 The Royal Museum of the Armed Forces and Military History is among the most popular tourist attractions in Belgium. It has many perks, including its location in the beautiful Cinquantenaire Park, or Jubelpark in Dutch. The museum itself contains an incredible archive with an extensive collection, plus exhibitions highlighting 10 centuries of military history.

In 1875, architect Gédéon Bordiau began to design Jublepark, complete with exhibition halls, on the site where the civil guard had been training only a few years earlier. Many setbacks occurred over the years and the buildings weren’t complete until 1905, with some updates taking place in 1910. That same year, during the Brussels International Exposition 1910, Louis Leconte displayed his 900-piece collection of military artefacts. His exhibition was met with such great success that Belgium started to think about developing a permanent museum, Musée de l’Armée, dedicated to housing his military archive.

The collection grew very fast, especially after World War I, and finding a place to preserve the immense collection was urgent. The northern section of the Cinquantenaire palaces seemed to fit the bill. King Albert I officially opened the museum in 1923, and Louis Leconte was selected as the head curator. In 1976, the museum became a category two federal scientific institution, which focuses on research, as well as obtaining and preserving documents and military objects.

Today, the museum has several departments that will entice any history fan. Highlights include the Aviation Hall, the Tanks Department and the Navy Gallery, to name a few. With five large exhibition spaces, the Royal Museum of the Armed Forces and Military History displays one of the world’s largest military collections, providing a fantastic look into the evolution of Belgian and foreign military groups.