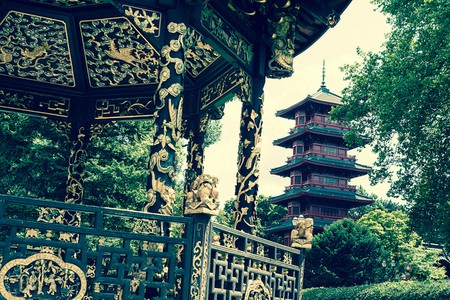 On the edge of the Royal Estate at Laeken, a surprising pair of Asian-style buildings pops up out of nowhere. Offering a strange juxtaposition next to the Belgian monarchy’s traditional European palace, the Japanese Tower and Chinese Pavilion house the Museums of the Far East.

The striking red tower and heavily decorated pavilion have now been the oddballs on the capital’s skyline for over a century. King Leopold II – always one for grand ideas to elevate the city of Brussels – found himself heavily influenced by the oriental splendor at the 1900 Paris World Fair. Wanting to be able to take a walk through his own stretched out domains and see such exotic buildings, Leopold ordered Parisian architect Alexandre Marcel to design the Japanese Tower and accompanying pavilion.

Since the constructions symbolized the trade relations between Belgium, China and Japan, it was important for them to look as authentic as possible. A large effort was made to craft the exterior details in the countries themselves. A team of specialists from Yokahama was responsible for the decorative tiers of the pagoda, while the wood paneling on the Chinese pavilion was shipped over from Shanghai. A gorgeous garden with Japanese trees was added to complete the illusion and the whole Asian project was finished around 1910.

Originally meant to be a luxurious restaurant for the Japanese tower, the pavilion became a part of the Far East Museums instead. Together with its coach house and the tower from the Land of the Rising Sun, it exhibited oriental ceramics, furniture and tapestries from the 18th and 19th centuries. The most valuable pieces are now stored at the Cinquantenaire Museum, however, since all three buildings were forced to close for safety reasons in 2013 and have not been reopened since.

As of yet, the future of the museums remains unclear. What is for certain is that to this day, thousands of visitors keep showing up to admire some of the most exotic and unusual buildings to ever grace the Brussels landscape.