The History of Belgium’s Koekelberg Basilica in One Minute 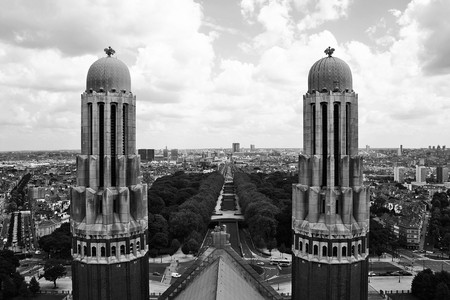 The National Basilica of the Sacred Heart in Koekelberg, or the Koekelberg Basilica, is an unmistakable landmark on the Brussels skyline and a fascinating place to go and visit.

Its cupola offers an excellent panoramic view of Brussels at the height of 53 meters. It is the fifth largest church in the world after the Basilica of Notre-Dame in Yamoussoukro, St. Peter’s Basilica in Rome, St. Paul’s Basilica in London and Santa Maria Dei Fiori in Florence.

When King Leopold II was thinking about a new building in Parc Elizabeth, he looked for inspiration in Paris. At first, he wanted to build a Panthéon like the one in Paris, but after he visited Basilique du Sacré-Coeur, he changed his mind and decided to build a church instead. The construction of the basilica started in 1905, and it was interrupted by both world wars. The church was not completed until 1969. Its initiator – King Leopold II – did not even have a chance to see it since he died a few years after the construction began.

The basilica was designed by three architects. Pierre Langerock was the first architect who wanted to make an opulent cathedral in Neo-Gothic style, but due to the financial situation after the war, Belgium was not able to afford Langerock’s plan. Albert Van Huffel was then asked to take over as the chief builder. Van Huffel died in 1935 and was succeeded by his right-hand man, Paul Rome.

Expressionist artist Harry Elstrøm created the sculptures depicting the four evangelists on the outside of the basilica and an outstanding Calvary inside. Another sculptor, George Minne, designed the bronze Calvary outside and the sculpture of the Sacred Heart.

Similar to other Art Deco buildings, the basilica is made of reinforced concrete and is decorated inside with glazed terracotta. With its 89 metres of height and 164.5 metres in length, it is the largest Art Deco building in the world. Albert Van Huffel properly used the whole space of the church and designed something like a city within a city – as it contains a crypt and chapel but also ample space that today houses two religious museums, cultural expositions and a restaurant. Certainly not to be missed, the Basilica offers a unique panorama of the Brussels cityscape.